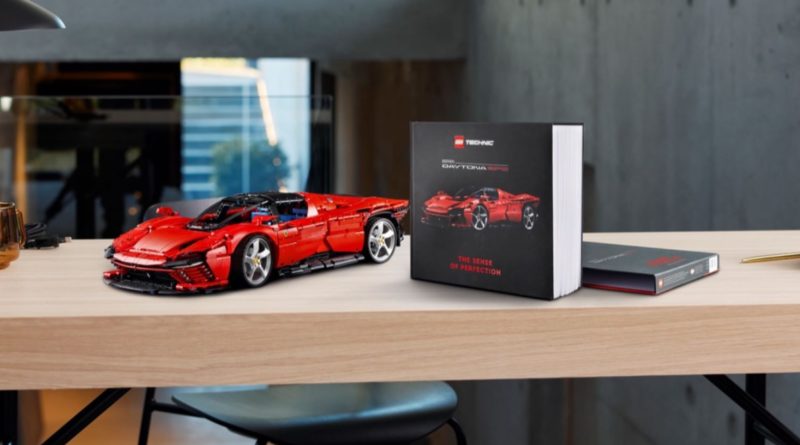 Take a deep dive into the development of the latest LEGO Technic supercar with the limited-edition hardback book Ferrari Daytona SP3 The Sense of Perfection.

The Technic Ultimate Series may have only been announced to the public with the launch of the LEGO Technic 42143 Ferrari Daytona SP3, but this new subtheme appears to have been in the pipeline for a number of years. In the introduction, Niels Henrik Horsted, Head of Product, LEGO Technic says: “The Ultimate concept itself had been born back in 2016, as a way to expand the LEGO Technic experience, specifically for adult builders.

“With an Ultimate set, you don’t just get a big, detailed build; you get a complete package with insights from our own designers and from those on the partner’s side.”

This book is part of that ‘complete package’. The wording he uses is interesting, something we’ll return to, but first off, let’s take a look at what you get.

It’s a beautifully-produced hardback book that comes in a rigid slipcase to protect it and could easily be mistaken for one of the many expensive books produced about motoring exotica.

It consists of five basic sections, covering the partnership between the LEGO Group and Ferrari, the design process, how the set was styled, including the new elements that were created along the way, and the refining process, which looks at element testing. The last two chapters look at refining the set, including quality testing of the new elements and insight into the creation of the instructions and finally how the set is put into production.

The book walks a fine line between appealing to readers coming from both the LEGO world and the Ferrari world, and the author, Simon Hugo, pulls this off with aplomb. It’s probably skewed 80/20 in favour of the LEGO fan, but there’s enough to interest petrolheads too.

The design section reveals some interesting facts – on the LEGO side, Technic designer Uwe Wabra went through around 50 iterations of the model in the first month of design, while elsewhere there’s a telling insight into the Ferrari design ethos.

Unlike many mainstream car manufacturers, they hold no test clinics or focus groups – they have an unstinting belief in what they do, and the car only gets revealed to the public when it’s almost complete. It also shows what cool dudes the Ferrari design heads of department are. No cardigans and pencils tucked behind the ear for these guys – they look like supermodels!

While the book is clearly aimed at those who are buying the Daytona SP3, there’s enough in the book to interest anyone with more than a passing interest in LEGO and the production process, from Wabra working alone in the office though the pandemic (he wasn’t allowed to take any models home due to secrecy constraints) to the number of new elements designed each year.

Given the longevity of LEGO as a toy it would be reasonable to assume that the creation of new elements was a rare occurrence, but as LEGO Element Designer Esmee Kuenen explains, the LEGO Group develops more than 300 new elements each year across the various themes, plus dozens more that never make it into production.

Many of these types of books are heavily biased towards glossy pictures and not much text, but in this case there’s a very good balance. Across the approximately 240 pages, there’s a wealth of information, but there’s no skimping on the glossy photos too, whether it’s gleaming images of the actual Ferrari, clay mockups of the car or early design sketches from the Centro Stile, Ferrari’s in-house Design Studio.

From the LEGO side, there’s everything from Uwe Wabra at his desk in Billund or in his garage at home – both of which are cluttered with autojumble – to blueprints for new elements and the moulding machines that create the elements that go into every set.

Along the way there’s an insight into the packaging design and the problems that the team have to deal with. For example, the two instruction manuals may look very similar, but they can’t have the same number of pages or the packing machines wouldn’t be able to tell them apart. The team also think about the ‘pfff’ sound as the lid is removed from the box. Having the box play an engine roar as you open it was one of the more outlandish ideas that was cast aside fairly early on.

Ulla Pelsø and Jane Knudsen, who between them created the detailed building instructions, had to consider that while the guide could be complex, the set might be purchased by a Ferrari aficionado who’d never built a LEGO set before, so they couldn’t take things too far.

There are many more nuggets along the way, such as why the 1×2 ‘apostrophe’ piece was the part that gave the team the most trouble during the process, or the quote from graphic designer, Andre Sang-Tae Stenbryggen, who says: “With stickers, I can use a slightly broader range of colours and line widths, but we prefer to use decorated (printed) parts wherever we can justify it, as it makes a model more special.” Maybe he could mention that to the Star Wars UCS team?

It’s a fascinating book to read, particularly for those with an interest in the end-to-end process of any LEGO set, not just this particular one. It’ll also look attractive on your bookshelf, so for those potential buyers, it simply comes down to whether you can justify the cost, which would buy you a substantial LEGO set. For Ferrari fans it’s probably a little more difficult to recommend, as there will undoubtedly be books published that are solely devoted to the car itself.

But if you can afford it, we’d recommend it. Just don’t hang about on June 1. We reckon the 5,000 copies of Ferrari Daytona SP3 The Sense of Perfection will be gone as fast as the car itself.

One last thing. Since the announcement of the new subtheme, most people have been referring to it as the Technic Ultimate Car Series. It’s interesting to note that in the introduction, Niels Henrik Horsted simply refers to the ‘Ultimate’ concept for adult builders. Could this mean something other than a car in the future? We’ll have to wait and see.

This book was provided for review by the LEGO Group.