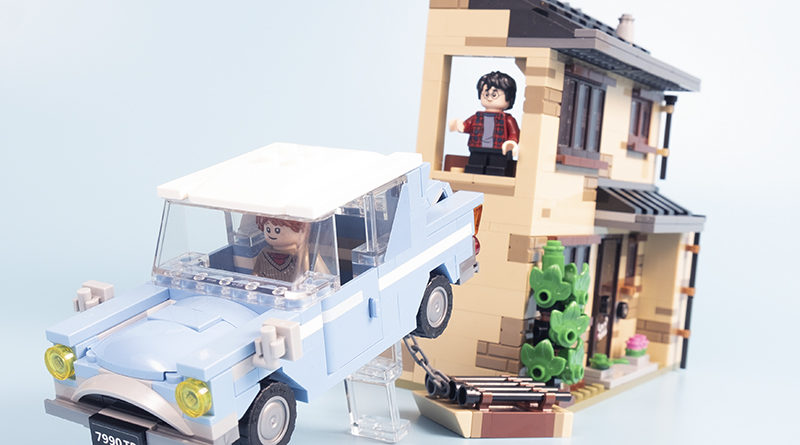 Life isn’t great for Harry Potter at 4 Privet Drive, so it’s a relief that LEGO 75968 includes a flying Ford Anglia to facilitate his escape.

Almost 20 years since the LEGO Group last tackled Harry Potter’s miserable home, 75968 4 Privet Drive demonstrates everything that has changed since the first time the Wizarding World was represented in the brick. From the build itself to the minifigures, this new set offers everything that fans now expect from the theme.

75968 4 Privet Drive incorporates storylines from Harry Potter and the Philosopher’s Stone and Harry Potter and the Chamber of Secrets. The first time the story visits the location, Harry is living under the stairs as the Dursleys prevent him from receiving letters from Hogwarts, before the following year when his bedroom window is reinforced with iron bars.

It’s nice that the design team went down this route, as it makes this the only version of the Dursley residence that fans will ever need. Since LEGO Harry Potter returned a few years ago, the designers have demonstrated that they know what works this time. When 4728 Escape from Privet Drive was released in 2002, the only thing it really did right was the flying Ford Anglia – it contained just three minifigures, only one of note, and the building had no substance to it.

This time around, the building is on par with what is found in the Creator theme and every key minifigure is included in the set. Opting for a similar method to the Winter Village sets, the house is fairly substantial, but leaves the back wide open so that rooms can be filled with detail and then easily accessed.

There’s nothing shockingly innovative here, but not every set needs to do something new. As ever, LEGO house building is incredibly satisfying. Where things do get rather interesting is when a little function is built into he wall above the fireplace – insert some 1×2 letters, then turn the wheel to have them ‘fly’ out of the fireplace, bringing an important movie moment to life.

Another challenge the designers solved is how to replicate Harry’s bedroom under the stairs while still making it accessible. A hinged section in the wall can be swung open to see Harry’s miniscule space and position the minifigure inside. A neat sticker in there shows a shelf of toys, which are all authentically LEGO.

The living room captures the flavour of the version features in the films, with a sofa, armchair and rug. There’s enough space to sit and stand a few minifigures along with a floating cake. Upstairs achieves the same for Harry’s bedroom, with a few homely touches thanks to some labels.

The exterior of the building is very accurate to what is seen on screen, particularly in terms of shape and scale. The roof is worthy of note, as the method used is simple but very effective – as different roof building techniques get more advanced, sometimes using one traditional roof piece dozens of times works a treat.

In addition to the house, 75968 4 Privet Drive builds a flying Ford Anglia, which is best described as a stylised version of the screen car. There are ridges where there shouldn’t be, a line alongside the side that switches colour and has a gap, plus angles at the back that are a bit too sharp. At a glance it’s clear what the car is, but it isn’t as well executed as the building.

What really shines about the Ford Anglia is its synergy with the house. Hidden in the boot is a chain that attaches to the barred window, which is built in such a way that it is easily pulled out. There’s then space for both Ron and Harry inside the vehicle so that they can – almost – catch up with the Hogwarts Express.

LEGO Harry Potter fans like collecting minifigures. The designers have clearly received that memo, actioned it and probably have it on the office wall. Every character required (unless anyone actually wants the Dursleys’ guests) to re-enact the film scenes are included in the set.

Vernon, Petunia and Dudley Dursley all capture the awful personalities associated with them through smug, sneering expressions, with alternate shocked faces for when cakes start floating around. Their outfits also match their suburban muggle lives. Given that the original LEGO version of this location only included Vernon, collectors will be delighted to get the full family in one box.

The version of Harry in the set has a new torso for the casual boy wizard, while Dobby features a new expression printed onto the modern head mould. Ron is identical to the minifigure included in 75953 Hogwarts Whomping Willow.

While the location isn’t huge for the price, the way it is packed with detail makes it well worth the money. 4728 Escape from Privet Drive demonstrates what happens when the price is too low and there aren’t enough bricks to work with, so it is a relief that this time around 4 Privet Drive has been given the attention it deserves.

LEGO Harry Potter is proving to be the most consistent theme in the LEGO Group’s portfolio, with every set offering accurate details, a satisfying build and a completed model worthy of display. 75968 4 Privet Drive delivers in terms of the quality of the build, the features included and the line-up of minifigures.

75968 4 Privet Drive is available now at at LEGO.com. You can help support Brick Fanatics’ work by using our affiliate links.