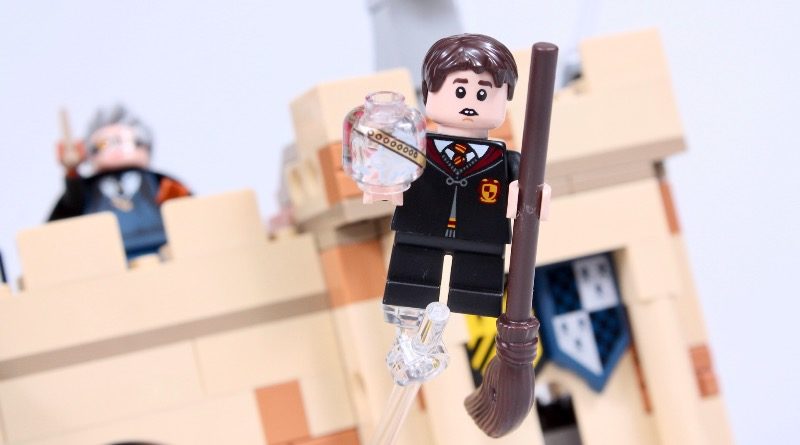 Cast your mind back to 2002 – pull out your Remembrall if you must – and recall a time when the LEGO Group was happy to deliver a 23-piece set with two minifigures for just £2.99. That model was 4711 Flying Lesson, a diminutive set that delivered a lot of action in a very tiny package.

It’s also the starting point for 76395 Hogwarts: First Flying Lesson, a 20th anniversary set that follows its fellow June 1 releases in upgrading a classic model – but at the same time departs from them in one very major way.

If, like us, you’re already knee-deep in several sprawling Hogwarts displays, you’ll probably have clocked from the above image alone why 76395 Hogwarts: First Flying Lesson represents a departure from the rest of the 20th anniversary wave.

While 76386 Hogwarts: Polyjuice Potion Mistake, 76387 Hogwarts: Fluffy Encounter and 76389 Hogwarts Chamber of Secrets fashion a new modular formula for this year’s Hogwarts sets, transforming the wizarding school into a streamlined, boxy format that apes the aesthetics of the original 2001 wave, 76395 Hogwarts: First Flying Lesson instead aligns itself with the modern design sensibilities of 75954 Hogwarts Great Hall and 75969 Hogwarts Astronomy Tower.

That should make it immediately appealing to veteran Potter fans hoping to continue their current collection, with a strong mix of tan and nougat bricks allowing it to slide in neatly next to those 2018-2020 sets. It presents a familiar build experience, too, with a similar part palette to those sets – but there’s also a keen sense that this modular build, which can be pulled apart and reconfigured at will, would also fit just fine with 76389 Hogwarts Chamber of Secrets and company.

To that end, 76395 Hogwarts: First Flying Lesson sits as something of a halfway house between both styles, sharing elements and colours from each. That could easily have been to its detriment, but it actually manages to pull off its dual-purpose role very successfully, making for a fine addition to your Hogwarts display no matter which style of set you prefer.

There’s also just enough detail here to prevent it from being a basic wall – even if it is still a wall, no matter which way you slice it – from the stickered house flags to the trophy cabinet and crate of Quidditch gear found inside.

The trans-clear beams used to hoist the minifigures into the air are a peculiar one, though – they’re too stiff to provide dynamic display options, with only one axis of articulation, and kids playing with the set are sure to abandon them anyway, in favour of just flying the minifigures around by hand. Still, grabbing three in a single set is nothing to sniff at, given their potential for being repurposed in other displays.

As this is one of the few Hogwarts sets that depicts a scene in the school grounds, a little greenery around the base also wouldn’t have gone amiss. Otherwise, though, this is a solid mini expansion into the wider Hogwarts display – whichever one you’re building up – that won’t break the bank.

Bearing in mind that price tag, however, the minifigure line-up is really where 76395 Hogwarts: First Flying Lesson falls short. All three of its regular characters make sense for the scene, and particularly with a view to the original 2002 model this set is based on, but four minifigures total feels like too few next to both the cheaper 76386 Hogwarts: Polyjuice Potion Mistake and last year’s 75967 Forbidden Forest: Umbridge’s Encounter.

That 2019 set included two unique minifigures and two brand new centaurs, and while Madame Hooch is a marked improvement over the version that came in 2018’s 5005254 Harry Potter Minifigure Collection, Neville and Malfoy aren’t anything to get too excited about. An extra student would have rounded things out nicely (as long as it wasn’t Harry).

Golden Quirrell is a nice touch, though, especially as a nod to the LEGO Group’s first ever double-sided head. And the sword-wielding statue technically uses minifigure parts…

The original 4711 Flying Lesson could be had for just £2.99 in 2002, or nine times cheaper than 76395 Hogwarts: First Flying Lesson. But you do get double the minifigures and 11 times more pieces here, so it’s probably not a great comparison.

While it doesn’t present the best value in this summer’s LEGO Harry Potter range, 76395 Hogwarts: First Flying Lesson stands out as the only model that’s immediately compatible with the wider Hogwarts display we’ve all been building up for the past few years. And for that reason alone – plus Madame Hooch, and if you’re collecting the golden minifigures, Professor Quirrell – you probably won’t want to skip this, even if you do hold out for a discount.

Support the work that Brick Fanatics does by purchasing your LEGO Harry Potter sets through Jadlam Toys or LEGO.com using our affiliate links.

76395 Hogwarts: First Flying Lesson takes around 35 minutes to assemble, and most of that time is spent pleasingly sticker-free.

How many pieces are in LEGO Harry Potter 76395 Hogwarts: First Flying Lesson?

In its default configuration, 76395 Hogwarts: First Flying Lesson measures 20cm wide, 15cm tall and 6cm deep. Given its modular nature, however, those dimensions are pretty flexible.