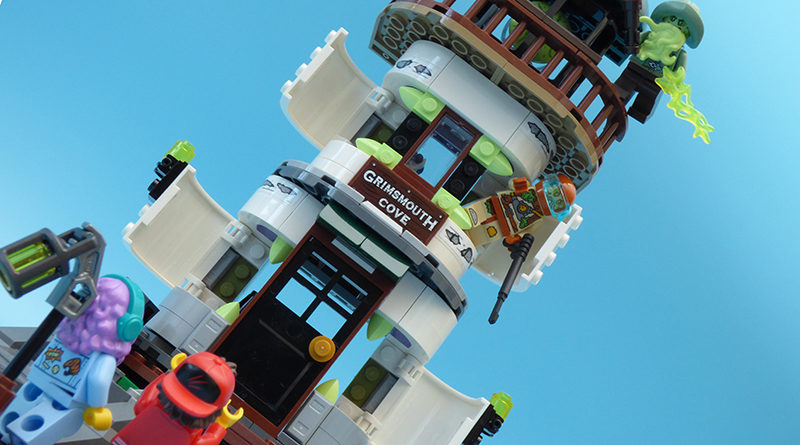 There is more to this LEGO lighthouse than meets the eye, as Jack and Parker will discover in Hidden Side 70431 The Lighthouse of Darkness

There are three LEGO themes that tend to tackle lighthouses – Creator, CITY and Friends (perhaps it is time for a Creator Expert version…). In each case, they are very different, always reflecting the theme that they are part of. That is the case in 70431 The Lighthouse of Darkness, which offers a haunted lighthouse on a rocky outcrop.

Building the set begins with the rocky area at the bottom, which contains a little cave section, where this is space for a bat, skeleton and candle. The delightfully named 6046905 Plade 1X1 M. 1 Lod. Tand piece – the 1×1 with a hanging ‘tooth’ – is used to perfection as dripping candle wax. It is at this early stage that the lower function is built, which involves having a section of rock hinged with Technic pins, and then sloped pieces either side to disguise its angle.

A few years ago it would be unlikely to see certain techniques outside of a LEGO Creator Expert set, but here the lighthouse is positioned at an angle to give it a more natural look. Using the problem-solving part 4515351 Plate 4X4 Round W. Snap, the base of the lighthouse is attached to the rock at an offset, making it look really authentic.

There is a lot of SNOT (studs not on top) building to make up the lighthouse, with the bottom and middle sections following similar patterns. SNOT sections make up the left- and right-hand sides, with a door or window in the centre. The back is left open for easy access. Curved hinged elements open up, so that when being transformed the model can reveal its spooky secrets.

Some detail is squeezed into the interior, with a comms station on one floor and a chess board on another. While the chess board lacks a few squares, both floors represent lighthouse life very well.

The top of the tower, where the light is located, is absolutely spot-on. While simple to construct, its with the scale of the set and works in terms of design.

The dark green and white colour scheme, with a hint of brown, works throughout the lighthouse. It fits with the more muted colour scheme of LEGO Hidden Side and captures the haunted feel.

When it comes to the transformation, the eye turns to become a spooky eye, the sides of the lighthouse open to reveal teeth and a claw pops out of the rock beneath the tower. It works, but does not have a huge visual impact, feeling like there needed to be a bit more monster hidden within.

As ever, various flaps are found throughout the set, which can be flipped open during gameplay on the associated app to progress.

Another constant in the LEGO Hidden Side theme is the standard of the minifigures. Jack and Parker are their usual selves, while the Diver has some brilliant detailing that gets across the idea he has been stuck beneath the surface for too long.

The lighthouse keeper is the stand-out though, with his big, swirly ghost beard combined with the hat making him a fearsome looking spook. Excellent detailing on his torso is all covered up by that spectacular facial hair, but it is all there.

70431 The Lighthouse of Darkness works well as a lighthouse set, albeit with a focus on the lighthouse’s setting as well as the structure itself. It could even fit into a City layout. The transformation is fine but not great, so it is probably not worth purchasing just for the function. While not the best of the bunch, it is another worthy entry into the LEGO Hidden Side theme.

70431 The Lighthouse of Darkness is available now at LEGO.com. You can help support Brick Fanatics’ work by using our affiliate links.