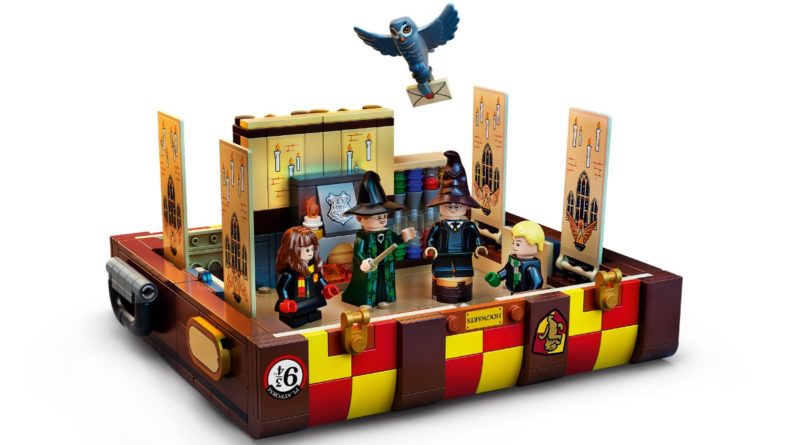 The newly-revealed LEGO Harry Potter 76399 Hogwarts Magical Trunk is now up on LEGO.com, confirming its price and release date.

The 603-piece set will launch on March 1 with a price tag of £54.99 in the UK and €59.99 in Europe (the US price is still to be confirmed). Its listing on the official online store has also provided us with better pics of everything included in the box, which you can check out in the gallery below.

76399 Hogwarts Magical Trunk offers a fully-customisable Wizarding World experience, no matter which of the four Hogwarts houses you belong to: whether you’re in Gryffindor, Slytherin, Ravenclaw or Hufflepuff, you can deck out both the exterior and interior of the buildable suitcase in the appropriate colours.

The interior can be styled as either the Great Hall – for dinner, or for the Sorting Ceremony – or any one of four common rooms (one for each house, obvs). There’s also plenty of customisation on offer across the set’s minifigures: as well as torsos for each of the four houses (and one generic Hogwarts student torso), 76399 Hogwarts Magical Trunk includes a huge range of heads and hairpieces.

You can go with named characters from the movies, such as Harry Potter, Ron Weasley, Hermione Granger, Draco Malfoy, and Luna Lovegood, or you can simply mix and match styles to create a minifigure that represents yourself in the Wizarding World.

It’s another new direction for the LEGO Harry Potter theme following last year’s Hogwarts Moments sets and 20th anniversary range, as the LEGO Group seeks to keep things fresh in what will be the renewed line’s fifth year on shelves.

76399 Hogwarts Magical Trunk will be available to buy at LEGO.com and in LEGO Stores from March 1, 2022.