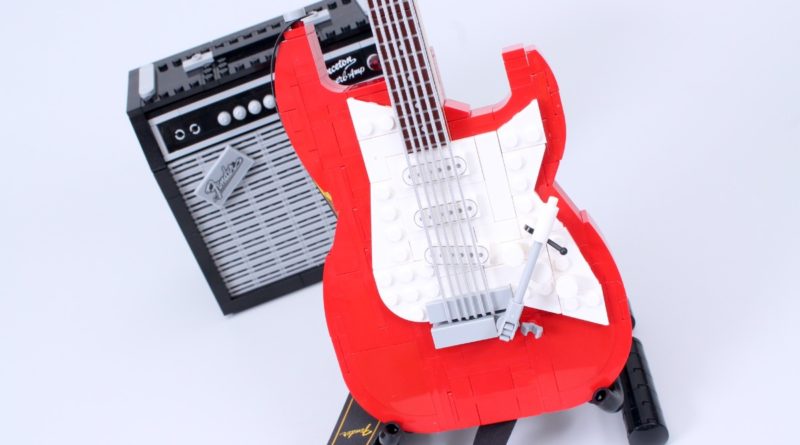 The LEGO Ideas team tunes up for another smash hit with 21329 Fender Stratocaster, a well-crafted tribute to an iconic instrument.

First designed and brought to market in 1952 by Leo Fender, Bill Carson, George Fullerton and Freddie Tavares, the Fender Stratocaster – or Strat to the cool kids – revolutionised the landscape of electric guitars, and over the next several decades became the template that many other manufacturers could only emulate.

Known for its distinctive shape, double cutaway (the curved indents at the top of the body, allowing better access to the upper frets), extended horn and contoured back, the Strat was specifically designed to be comfortable played standing up for extended periods. There were technical improvements on earlier electrics, too: the three-pickup design gave musicians more freedom and control over tone and sound, and an innovative vibrato system offered a greater range of pitch.

That timeless design has led to nearly 60 years of market dominance for the Stratocaster – and that’s exactly the kind of legacy that makes it a perfect fit for the LEGO Group, which is slowly but surely embracing music as a ‘passion point’ (as the company refers to it) throughout its portfolio, particularly with adults in mind.

Tomáš Letanay’s contest-winning entry has provided just such an opportunity for the Ideas team to bring another buildable instrument to store shelves, in what feels like an obvious concept following 21323 Grand Piano – but there’s nothing remotely obvious in the way the designers have approached this 2-in-1 model, which hits almost all the right notes.

While the front of 21329 Fender Stratocaster’s box shows a fiesta red replica – rocked by musicians including Gary Moore, who recorded with Skid Row and Thin Lizzy before going solo, and Hank Marvin, who played with Cliff Richard’s backing band the Shadows – flipping it round reveals that the 37th LEGO Ideas set actually includes bricks to build it in either red or black.

That’s just the latest example in a string of sets that have offered customisation options, and a great nod to Letanay’s original ‘music to our ears’ contest entry, which pitched several different colourways for the Strat. Bright red wasn’t among those hues, but it’s a nicer contrast to black than dark red (or ‘wine red’, in Strat lingo) would have been.

Don’t worry if you can’t settle on a colour straight away, though: no matter which you choose, the first stages of the build will be the same, as the head, neck, frets, and top of the pickguard are all locked into place first. This is where 21329 Fender Stratocaster swings heaviest away from the original submission, as Letanay’s brick-built frets and chunky neck have been replaced by printed tiles, allowing for a slimmer effect behind the strings.

Otherwise, the final model here comes in surprisingly close to the initial concept, both in scale and design. It’s a little more fleshed out – quite literally, filling in some of the gaps in the bodywork – and creates a cleaner solution for the strings (which we’ll come to later), but otherwise, Letanay’s original vision for a brick-built guitar absolutely shines through.

Before you get to all that, though, the time will come when you have to make a decision: do you use bags numbered three, four, six and seven for the red Strat, or three, five, six and eight for the black?  Either way, the next stage of the build involves constructing the rest of the pickguard, the body and the strings – and either way, you’re mixing in pieces from bags three and six.

The net result is that swapping between the two colourways isn’t all that simple. You can’t just cleanly detach the black body and attach a red sub-assembly as the official images suggest; thanks to the way the strings are integrated into the bottom of the pickguard and the body, you’ll have to pry apart chunks of the guitar if you fancy a change.

On the other hand, 21329 Fender Stratocaster’s build is unique enough that you probably won’t mind giving it a couple of goes. The bulk of the body comes together pretty much as you’d expect, a combination of curved and straight slopes stacked with studs facing in all directions (though ultimately completely covered for the Strat’s smooth contours), but as we’ve alluded to already, it’s the strings where things really get interesting.

Using actual LEGO string elements (with a stud at each end), you’ll lock all six into place in the body, then pull them up and around to the head – lacing them through indents in a gear rack – before laying them down with brightly-coloured 1×1 round plates to make sure they’re in the correct order. Those colourful plates are then removed, allowing you to tighten the strings before replacing them with less garish grey pieces.

In short, it replicates the real-life process of stringing and tuning a guitar. Real-world objects recreated in LEGO don’t (and indeed, can’t) always offer that degree of authenticity, but on the rare occasion where it does come through in the build – here, 10281 Bonsai Tree, and so on – it makes for a genuinely surprising and engaging experience.

And that’s how, across just those 10 pages of instructions, 21329 Fender Stratocaster anchors itself as an instant classic in the LEGO Ideas line-up, embodying everything the theme prizes itself on: namely, unique builds that wouldn’t fit anywhere else in the portfolio. And that’s before you even get to the amp.

For casual music fans, the Strat all on its own might have been an easier sell – a black and grey box doesn’t sound too interesting on paper – but the ’65 Princeton Reverb amp pulls a similar trick to 71374 Nintendo Entertainment System’s console in how it’s designed first and foremost for the builder, rather than solely to be admired on display.

That’s not to say it doesn’t look the part – there are even more levels of authenticity on offer here – but that it goes above and beyond with its internals, replicating the circuitry and wiring you’ll find if you pry open a genuine amp. It almost feels too extra, in the sense that the hodgepodge of brightly-coloured plates and tiles won’t mean much to most people building 21329 Fender Stratocaster, but it makes for a much more interesting and dynamic build.

Add in the footswitch, stand and strap, and you’re left with a near-perfect representation of 21329 Fender Stratocaster’s source material – and there’s really no better praise than that. One of only two real niggles comes in how the LEGO Group has perhaps mis-sold the ease with which you can switch between the guitar’s two colourways, although keeping the black and red elements to their own bags simplifies things a little.

There are no minifigures included in 21329 Fender Stratocaster, and with good reason, as they’d be completely out of scale. A token musician famous for playing a Strat – like Jimi Hendrix, Eric Clapton or Pink Floyd’s David Gilmour, all of whom rocked black Strats over the years – would have been neat, but probably too junior for the older audience the LEGO Group is clearly targeting here.

At 1,073 pieces, 21329 Fender Stratocaster sails past Letanay’s original 676-piece submission. But compare the two side-by-side, and you’ll see just how closely they resemble each other – at least on the surface. That bump in part count can therefore be explained only by the amp’s internal structure, and – of course – the extra elements to build the guitar in either black or red.

Neither of those things are unwanted here, but they do hint at a resistance among the LEGO Ideas team to offer new sets at more manageable price points. 21329 Fender Stratocaster could easily have come in at maybe 60% of the price if the LEGO Group had delivered it in just one colour, with a hollow black box for the amp.

At the same time, that might have felt like less than 60% of its current value, purely from how much the detail in the amp adds to the build, and how the two separate colourways provide such a clear link to Letanay’s original submission. The result is a set that feels fair at $99.99 and €99.99 – but not so much at £99.99 in the UK.

We’ve seen abnormal swings in recent UK and EU pricing compared to the US across sets including 42126 Ford F-150 Raptor (review) and 10284 Camp Nou – FC Barcelona (review), and 21329 Fender Stratocaster apparently joins them in being geared towards a particular market. But where the localised appeal of those two sets is obvious, it feels less clear-cut with the Strat, which is sold just as readily in the UK as the US and Europe.

That leaves us with two points of concern with 21329 Fender Stratocaster: one, is this new price point indicative of wider supply issues we’re currently seeing in the UK, and could therefore set a worrying precedent for future sets? And two, when will we see a sub-£50 Ideas set again?

Update: The set’s actual UK price is £89.99, rather than £99.99, as the LEGO Group told us ahead of release. That £10 price difference isn’t enough to combat our qualms as laid out here, though…

There’s a reason so many legendary guitarists have picked up the Fender Stratocaster over the past six decades (and change), and it’s for similar reasons that you should bump 21329 Fender Stratocaster to the top of your LEGO wish list. Just as the real-life instrument revolutionised the landscape of electric guitars in the 1950s, so too does this set reinvent what it means to create a real-world object from bricks.

It really all comes down to the solution for those strings, but that’s not to forget just how brilliantly 21329 Fender Stratocaster captures the iconic shape, proportions and details of its source material, across both the guitar and amp. Throw in a LEGO Fender sticker for your actual instrument, and you’ve got a package perfectly suited to strummers, budding air guitarists or anyone with even a passing interest in creating music.

LEGO VIDIYO may not have been the perfect marriage of LEGO and music, but this is a far better example of how the two can work together – and play to both their strengths – at a more accessible price point than 21323 Grand Piano. Even if that price point is altogether too high in the UK…

Support the work that Brick Fanatics does by ordering your LEGO instruments using our affiliate links. Thank you!

How long does it take to build LEGO Ideas 21329 Fender Stratocaster?

You’ll spend around two to three hours assembling 21329 Fender Stratocaster, a good chunk of which involves stringing and tuning the guitar. Just like the real thing!

How many pieces are in LEGO Ideas 21329 Fender Stratocaster?

21329 Fender Stratocaster includes 1,074 pieces, split between the guitar, the amp and the foot pedal. Whether you choose to build in red or black, two bags of parts will be left out of the finished model.

The guitar in 21329 Fender Stratocaster measures in at a reasonable 36cm tall and 11cm wide, making for a realistic replica of the actual instrument.

How much does LEGO Ideas 21329 Fender Stratocaster cost?