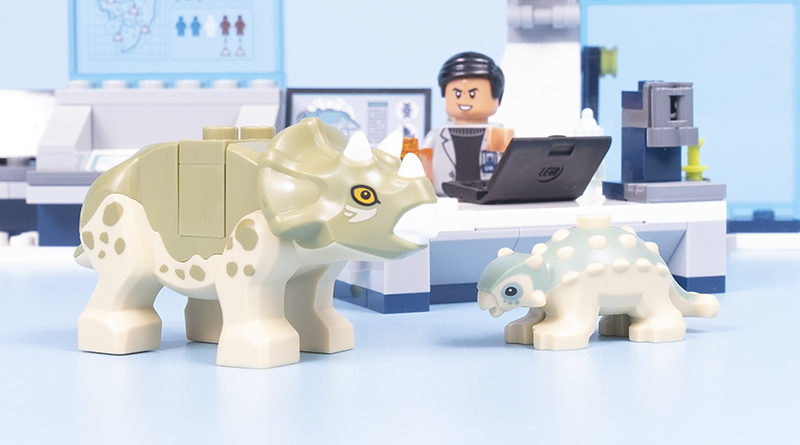 One of the key wow factors for visitors to Jurassic Park, and Jurassic World, is the size of dinosaurs. The mighty beasts are larger than anything that exists anymore in nature, so in the films characters marvel as these prehistoric beasts tower over them.

When it comes to LEGO Jurassic World though, smaller has proven better this year. The finest set from the new 2020 wave is also the smallest, with it offering nice movie references, different display options and two new baby dinosaurs.

Every potential pitfall applies to this set; there’s a lot of stickers, it’s not a full location and it’s too small to build anything meaningful. Yet fans will be convinced by this build and overlook these potential faults thanks to how well designed the model is.

Perhaps it’s down to lowered expectations, as more sets offer sections of locations, but this offers essentially a section of a lab. It’s not a full room and it’s not part of a larger building, but there is enough here to set up little scenes. The most compelling part is the egg turning machine, taking one of the memorable moments from the original Jurassic Park film and incorporating it here.

While building the set won’t take long, the little microscope deserves credit for being an intricate micro model. It sits on Wu’s desk, which also features a nice printed element representing a mosquito trapped in amber.

There are monitoring screens for the scientists to thoughtfully stare at, one representing the park’s current state and the others monitoring the set’s dinosaurs. These are all stickers, but they are important to the scene and convey the location, making them less of an irritant than usual.

Rather than including a full enclosure, the set includes a hint at one. There’s a glass screen with a triceratops monitor above it, which has a function that allows it to be knocked out for the baby trike’s escape – the name of the set does make sense, after all. Inside this area are some techie looking switches, plus a space for the dinosaur to eat and drink.

What works so well about the model is that it begs to be fiddled with. There are a few ways to display the included dinosaurs and minifigures to make for vibrant little scenes.

As is clear from first glance, the dinosaurs are the main draw here and are excellent. Ever since toddlers riding tiny Triceratops flashed on screen in Jurassic World, the adorable nature of baby herbivores has been apparent. Now, fans can own a LEGO baby Triceratops, which is perfectly replicated and printed in the blocky style. The 1×2 brick can even be removed so a minifigure can enjoy a dinosaur ride.

The young Ankylosaurus is also a very well designed element, even smaller in size than the Triceratops. It’s a nice touch of synergy with 75941 Indominus rex vs. Ankylosaurus, as the baby and parent can be displayed together if fans pick up both sets.

Owen Grady’s back again in this set, along with the villainous Dr Wu. The minifigure Wu captures his jacket/roll neck combo and villainous sneer from Jurassic World well.

Jurassic World sets are not known for their great value, but £17.99 isn’t too rough for a nice little model and two brand new dinosaur models. Sure, they are baby beasts, but for collectors they are must-haves.

Even though it’s the year’s smallest LEGO Jurassic World set, 75939 Dr. Wu’s Lab: Baby Dinosaurs Breakout is the best. A nice little lab comes together as a setting for two new baby dinosaurs, with the Triceratops and Ankylosaurus executed as well as fans would expect. Fans will find it hard to resist playing, or at least setting up different scenes, once they have built this set.