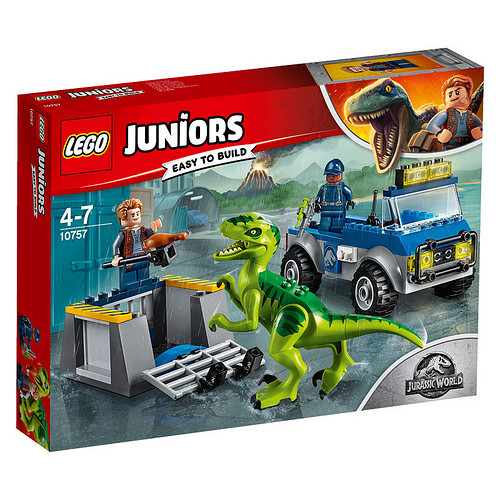 Jurassic World: Fallen Kingdom’s 10757 Raptor Rescue Truck hasn’t been designed for you, it includes very little LEGO and even less building, yet, you’ll still most likely buy it

Put yourself in the shoes of the Velociraptor included in 10757 Raptor Rescue Truck, and imagine that the LEGO Group are represented by Owen Grady, holding that delicious piece of chicken in front of you. You know it’s just bait, and you know that weird looking contraption you are being beckoned towards isn’t really designed for you. Yet, you’ll probably still take the bait, and end up looking silly and none the wiser for it. And that’s 10757 Raptor Rescue Truck and your decision to buy it in a nutshell.

Whilst LEGO Juniors is usually a theme that most adult fans of LEGO bypass, a couple of moves in recent months by the LEGO Group have made it a sub-genre worth paying some attention to. Alongside the upcoming trio of Juniors sets for The Incredibles 2 are three releases as part of the wider Jurassic World: Fallen Kingdom range. Where The Incredibles 2 sets infuriatingly offer a lovely range of exclusive minifigures, each JW: FK Juniors set offers either exclusive minifigure designs, uniquely-printed dinosaurs, or both.

It creates an unfortunate scenario – LEGO fans who these sets have very purposefully not been designed for will be buying them. Juniors is a line that has been developed as a first stepping stone into System scale building, for young children as they advance from Duplo. It is not a line for the purpose or scrutiny of older children and adults – the sets are specifically simplified, so as to offer the youngest, newest LEGO fans a first taste of what it is to create such things as a truck, like the one included in 10757 Raptor Rescue Truck.

Indeed, in this set the chassis is one large piece that just requires tyres and wheels fitted and then some basic application of bricks to create a rather clunky final design. Likewise, the transport cage for the included Velociraptor is a very simple design – the entire set should take an advanced builder no longer than five minutes to complete. It won’t teach you a great deal, it won’t inspire you much. In fact, it’ll likely frustrate you, because even if the panels on the side are printed, the Velociraptor barely fits into its transport cage, and only if you prop its arms up in a comical way. Basically, if you are reading this, this is definitely not a LEGO set designed for you.

Yet, you’ll most likely buy it, like we did on a trip out to Hamleys (yes, the Brick Fanatics team do go toy shopping together), because it includes unique minifigures and a unique dinosaur. Whilst Owen Grady is suffering from multiple-LEGO-set syndrome in the Jurassic World: Fallen Kingdom range, the accompanying guard is a design exclusive to the Juniors line. Interestingly, it’s the same template as the ACU guards from the 2015 Jurassic World range, but subtly different, offering a nice middle ground between those minifigures and the guards as they appear in the main System Jurassic World: Fallen Kingdom sets.

Meanwhile the print on the unnamed Velociraptor is also new. The colouring is the brightest yet for a LEGO raptor, coming in the same bright green as 2015’s Dilophosaurus, accented with a medium green back and printing. Even so, the remarkable design of this creature (albeit at least twice the height it should be if we are talking about real Velociraptors) continues to make it highly desirable and collectible in every colour.

What do we say about 10757 Raptor Rescue Truck? It hasn’t been designed with us in mind, so unfortunately it doesn’t hold up to any sort of scrutiny as a pure LEGO experience. This is a shame both for us and for the LEGO Group, as for the potentially high number of those buying this set, it will be all about the minifigures and the dinosaur. And that’s not all that a LEGO set should be about. Watch this space, and in the meantime, buy Juniors sets with frustration…

10757 Raptor Rescue Truck is available now at shop.LEGO.com. You can help support Brick Fanatics’ work by using our affiliate links.