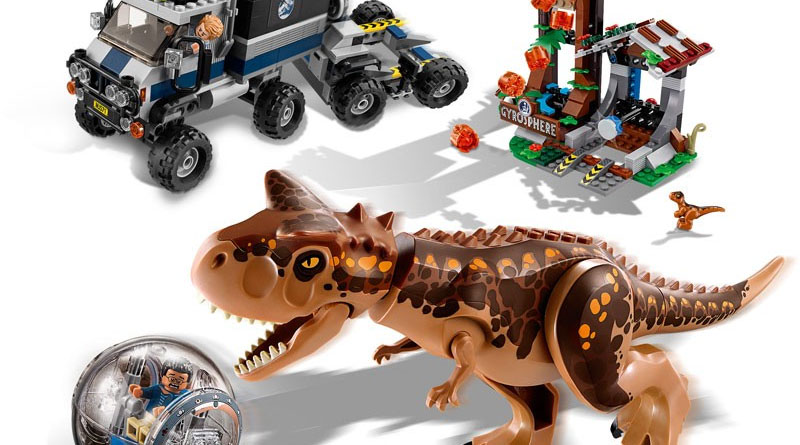 75929 Carnotaurus Gyrosphere Escape has all the promise of a great LEGO Jurassic World: Fallen Kingdom set, but ultimately, the individual pieces don’t quite come together

If you have avoided the trailers released so far for Jurassic World: Fallen Kingdom, then you will have missed Carnotaurus’ appearance in what seems a really spoilery moment. Well done you. For the rest of us, right before what happens in that moment happens, it provides a good sense of the scene that the LEGO Group has looked to translate into brick form for 75929 Carnotaurus Gyrosphere Escape. In fact, it comes across as more of an amalgamation of scenes before and after the clearly telegraphed catastrophic event that drives the first act of Jurassic World: Fallen Kingdom.

In what is most likely more applicable to before the volcanic eruptions worsen across the island, 75929 presents a large truck and tow-vehicle that can carry an included gyrosphere. For what is probably during and mainly after the worsening volcanic eruptions/encounter with the Carnotaurus, 75929 also includes said dinosaur and a tree with volcanic play feature (a hatch allows rounded trans-orange bricks to descend from its top), as well as a little bay to house and launch the gyrosphere. This build represents the gyrosphere’s launch pad in the movie, but in a state of abandon, overgrown with nature, as well as a rather damaged gyrosphere, represented through a variation on the side panels’ print detailing some cracks. It’s a welcome update on the clear ball that is otherwise identical to the 2015 version that appeared in two Jurassic World sets. Perhaps a shame that they can only sit the one minifigure, but, these things remain great fun rolling along the living room floor.

What is interesting about 75929 Carnotaurus Gyrosphere Escape as a build is that the launchpad that the gyrosphere sits in, and the tree section connected to it, feel simplistic in design, almost half-finished, where in comparison the truck in the set feels far more accomplished. The various pieces of foliage included in construction of the tree is very welcome, particularly for the high number of the new three-leaf 1×1 rounded plate, but the build suffers overall from a lack of change in direction – everything is vertically constructed until the very top of the tree, where the larger pieces are used on their side to cover up the lava play feature. It means that the tree feels very skinny, and not as pleasing on the eye as you’d otherwise expect – the LEGO Group’s repertoire of brick-built trees is really quite something, that’s why this is worth pointing out.

The Carnotaurus is another new mould for the 2018 line, using the same new arm pieces that the Stygimoloch in 75927 Stygimoloch Breakout has, and a new headpiece to capture this creature’s unique winged-horn appearance. Otherwise, the body and legs are the same as that of the Tyrannosaurus Rex, which certainly gives the Carnotaurus substantial size, but unfortunately in comparison to the T-Rex, a bit too much. This is a creature that in both the film’s universe and reality millions of years ago should be smaller in comparison, by roughly a third in height, length and mass. One further comparison to the T-Rex is relevant, when considering their respective headpieces, purely because where the LEGO T-Rex is given a sinister look thanks to its long row of teeth and the furrowed brow from which its eye look out under, the Carnotaurus’ expression is, put short, dopier. A smaller row of protruding teeth and a more open expression in the eyes doesn’t really cast the same level of fear into the minifigures included in 75929 Carnotaurus Gyrosphere Escape.

Those minifigures include once more Owen Grady, but this time with a unique torso, compared with an otherwise unchanging outfit across his four other appearances in the Jurassic World: Fallen Kingdom main and Juniors lines. That dude must smell. Claire Dearing is also included, less fortunately with the exact same design as in 75930 Indoraptor Rampage at Lockwood Estate and 10758 T. Rex Breakout. Aside from Owen’s blue torso, uniqueness is then offered in Franklin Webb, the character who appears in the movie’s trailers most reluctant to be on an island inhabited by free-roaming dinosaurs. His design is simple, yet effectively captures two excellent expressions that fairly represent the character on screen. Also included is the adorable baby dino that is currently only otherwise found in 75930 Indoraptor Rampage at Lockwood Estate. Not only is the mould surprisingly detailed, but the printing is too. Is it too much to buy 75929 Carnotaurus Gyrosphere Escape just for this little guy? Probably not. Hold one in your hands and tell us otherwise.

The vehicles in the set are a large truck on a raised wheelbase, and a transport unit that can carry the gyrosphere. It takes far fewer pieces than you’d expect to put these together, but the efficient use of those pieces manages to create two vehicles that feel at once both true to the source material as glimpsed in the trailers, and capable of some great play value. They are sturdy and there’s suitable variety to what can be done with them, in part thanks to the storage unit on the truck being removable. This is a transport vehicle you can imagine them using to collect dinosaurs with, and then perhaps also be involved in a chase with a Carnotaurus with. You may notice when building the truck that it is really rather similar to the truck LEGO Owen and Claire were driving in 75917 Raptor Rampage – whether that consistency is good or bad will be down to individual taste.

Surprisingly, for a set that has great promise and an exciting premise, 75929 Carnotaurus Gyrosphere Escape ends up being a mixed bag. Excellent vehicles are paired with a dinosaur design that could either impress or puzzle you, some middling minifigures, and a location build that doesn’t quite deliver. An imbalanced set doesn’t mean it isn’t fun though, but, there are better Jurassic World: Fallen Kingdom LEGO releases around this price point.