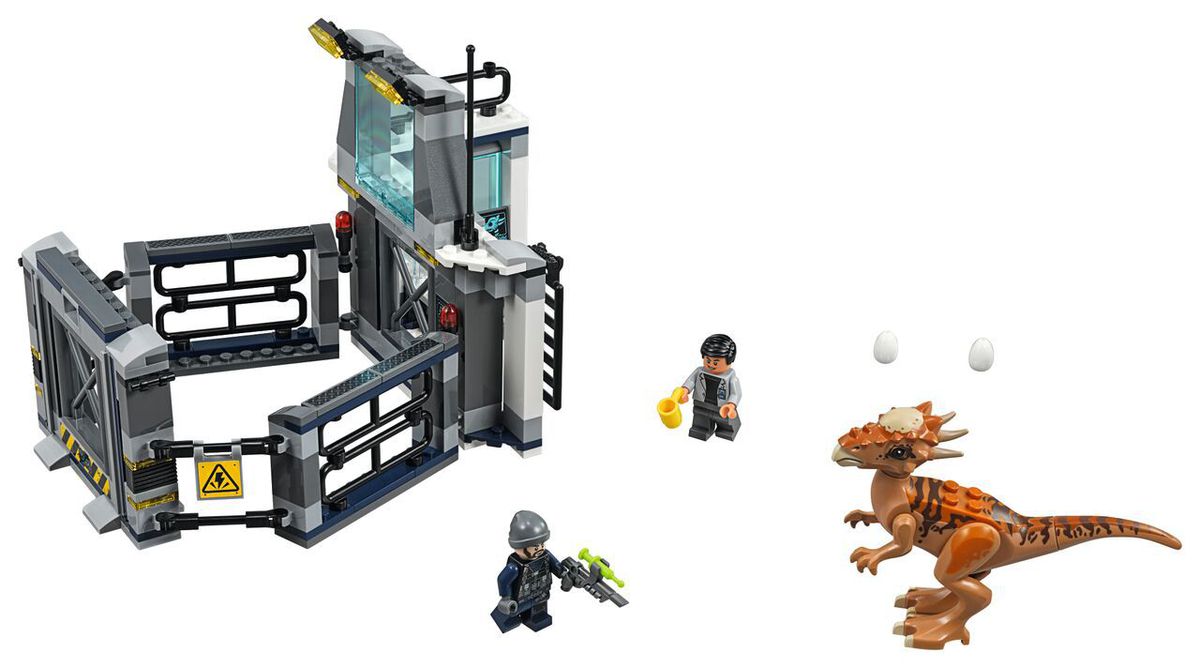 Sometimes it is the simplest premises that make for the best LEGO sets, as Jurassic World: Fallen Kingdom’s 75927 Stygimoloch Breakout demonstrates

75927 Stygimoloch Breakout introduces a new moulded dinosaur to the LEGO world, houses her (all the dinosaurs in the Jurassic Park/World universe are female) in a nicely designed enclosure and includes one of the best characters from the films these sets are all based on. What’s not to like? Maybe the price. It’s unfortunately a laboured point with regards to the Jurassic World: Fallen Kingdom, much as it was with the Jurassic World line three years ago. It didn’t stop that range selling far beyond the LEGO Group’s expectations, though, and it likely won’t scupper the chances of most of this year’s releases. 75927 Stygimoloch Breakout feels very much of the modern era of the LEGO Group – less LEGO than what has come before it, but, such wonderful design both in what that LEGO builds and the characters that are included.

Immediate comparisons with Jurassic World set 75920 Raptor Escape are most obvious to make when first assessing the completed 75927 Stygimoloch Breakout. The geometric set-up of a doorway, secure and electrified fencing and a back section are apparent in both and also put together in a very similar way. Both sets create a final, tight-fit enclosure for their respected included dinosaurs, as well as some simple mechanisms that add good play potential. Where 75920 Raptor Escape was a feeding area for the two Velociraptors included to occupy and presumably break out from, 75927 Stygimoloch Breakout is a lab environment to also, as the set name suggests, break out from.

Whilst it is £5 less, this year’s 75927 Stygimoloch Breakout offers 172 pieces fewer. That results in no side vehicle as with 75920 Raptor Escape and just the one dinosaur. This would be more of a disappointment to highlight, except for the fact that ultimately it is to 75927’s credit that the final result holds it own against its slightly more expensive, bigger predecessor.

The build is quick and relatively simple, but manages to create a suitably sized enclosure and a small research facility for the included Dr. Wu to not only carry out research and what looks like incubation of some un-hatched dinosaur eggs, but also observe the Stygimoloch from a second level platform. The set may sound basic, but when considering it within the context of the rest of the JW: FK range, it is one of the most effective in evenly offering both dinosaur and significant named character a plausible scenario translated effectively into a LEGO location.

The included Stygimoloch is one of this range’s debutants in LEGO form, introducing most obviously the new moulded headpiece, but also a new arm design. The legs are the same mould as the Dilophosaurus, and it comes in at the same height as both that and the Velociraptor, but unlike those two, its lower jaw is not a separate, articulated piece. The colouring is certainly fair with regards to its depiction within the Jurassic Park/World universe, but when considering the dimensions of its real world equivalent from millions of years ago, much like the Dilophosaurus and Velociraptor, it is twice the size that it should be. However, we are too far journeyed into the land of LEGO dinosaurs for scale to really matter anymore, unfortunately. This is a nicely designed and most crucially unique brick dinosaur that makes the appeal of 75927 Stygimoloch Breakout all the more greater.

The inclusion of Dr. Wu further draws you in, with his minifigure design having received a subtle update in the three years since the Jurassic World design. There’s also a generic armed guard, for when the play functions apparent in the set are activated and the Stygimoloch goes on the rampage.

In all, 75927 Stygimoloch Breakout is a solid set within the Jurassic World: Fallen Kingdom line that benefits from a design that skilfully sidesteps the issue of the increased price-per-piece ratio.