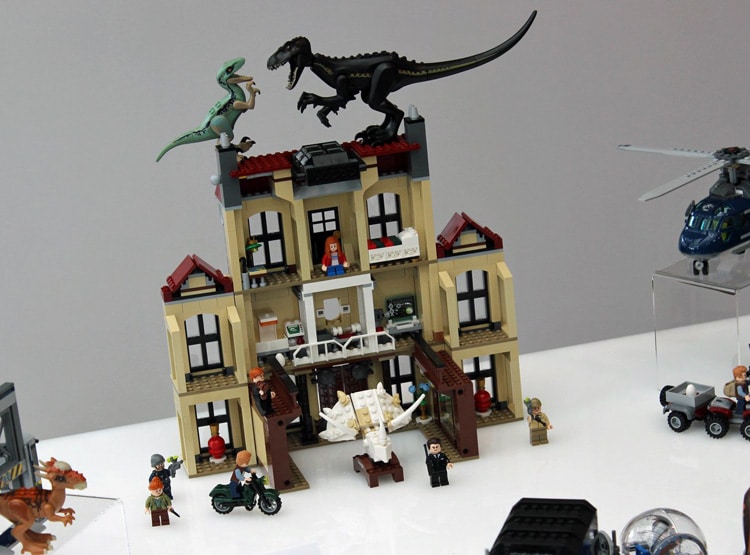 The biggest set in the LEGO Jurassic World: Fallen Kingdom range, 75930 Indoraptor Rampage at Lockwood Estate, takes things in a new direction for the dinosaurs…

The centrepiece to the LEGO Jurassic World: Fallen Kingdom range, 75930 Indoraptor Rampage at Lockwood Estate is an interesting set. At least twice the price of anything else in the Jurassic World: Fallen Kingdom range and including the spoilerific main ‘bad guy’ dinosaur, the Indoraptor, 75930 actually takes a risk in also offering a notable change of pace. Where every other set on offer presents island-based activity in the form of chasing down or being chased by various dinosaurs with vehicles, or within particular enclosures, 75930 is the first set in the LEGO Jurassic World universe presenting its dinosaur action in what appears to be an off-island, civilised setting. In terms of pure play, disregarding the context that the film could offer, it places its two dinosaurs in a new, unfamiliar context.

That unfamiliar setting is a large skeletal fascia to represent Lockwood Estate. The entire build is for creating this structure, and the end result is a nicely decorated exterior on the front side, and a grid of shallow, open rooms on the interior filled with various details no doubt relevant to the film. Further to this is a more detailed lower ground extension that, without the context of the film to compare with, is really reminiscent of a museum. For an idea of the complexity of this build, it took 90 minutes start to finish.

The outside to the building is predominantly tan, with eight window pieces built identical – detail comes from subtle aspects to the build, and two large stickers, before the roof steals the show thanks to a skylight with collapsing play function.

The interior to the building is where the set finds more detail, albeit packed into a shallow grid of rooms that is built in a very similar style to the 3-in-1 Creator range’s houses, with plenty of doorframes and pillars used to divide four-stud deep platforms. The build process may have you worried, as the first few bags see you build up and up for a very unstable and thin building, before you later add the side towers with Technic pins, and build forward the ground floor set-up.

The ground floor is the most interesting area to the finished set, creating that museum vibe thanks to two large wall panels with what could be large paintings represented underneath, and raised walkways above. Alongside this sits a separate and substantially sized centrepiece build of a triceratops head, masterfully created from bricks. In a LEGO universe that generally relies on large moulds for its dinosaurs, this sort of build is a nice reminder of what’s really possible with bricks. Floating separate from the rest of the building, it is pulled in by the lower ground panels to create a large open plan area for the minifigures and most crucially the larger dinosaurs to easily fit within. It would be pointless to create any structure and complete lock out the dinosaurs – you want to invite the havoc inside, after all.

Up one floor is a small research area. On the face of it there’s not much to see, but a nice stickered screen and two interesting builds for instruments in this section make it worth paying attention to. Ultimately it feels likely to make most sense once the film is out, as will the upstairs bedroom that the collapsing skylight presumably falls into, complete with tipping bed play feature.

Rafe Spall, Toby Jones and Ted Levine are an interesting trio of actors to add to the list of those who have a minifigure to their name, as respective characters Eli Mills, Gunnar Eversol and Ken Wheatley are included in 75930 Indoraptor Rampage at Lockwood Estate, with the first two exclusive to it too. Gunnar Eversol’s design is far more detailed than a quick glance at the box art would suggest, whilst Ken Wheatley is certainly going to be popular for collectors and builders of a particular genre or two, for his military style gear. Owen Grady and Claire Dearing appear here in the same gear and with the same expressions as other sets in the range, whilst Maisie Lockwood’s cuteness is rather usurped by the baby dino, an expertly and finely detailed new mould, albeit only in two of the most expensive sets in the range thus far.

Generally speaking, the LEGO Group have skilfully navigated Jurassic World’s premise of custom-tailored dinosaurs, even making a play function out of the simply ludicrous plot point (which is saying something in a movie universe that is based on dinosaurs having been brought back to life) in the 2018 range of sets with suggestions at the end of each instruction booklet on swapping out the heads, arms and legs of the various LEGO dinosaurs to create your own made-up creatures.

The plot device, however, was unavoidable in 2015 when it came time to creating a dinosaur for the Indominus Rex, and it is the same in the Jurassic World: Fallen Kingdom line with regards the Indoraptor. Much like its white predecessor, this made-up dinosaur makes for a fierce-looking creature that can easily fill the role of evil antagonist in the film, and, it translates nicely into LEGO form. Given the uneven nature of scale among these LEGO dinosaurs, an oversized, black Velociraptor isn’t that jarring. The arms and claws are the same mould as for the Indominus Rex, whilst the legs, body and head are all exclusive creations.

Meanwhile, Blue has had a recolour and an upgrade in print design to bring her even closer in line with her on screen equivalent. Whilst the Velociraptors are the best examples of incorrect scaling in LEGO form, both with the film and real-world versions of the creature, they are also the best example of why these Jurassic World sets are more costly, yet still so desirable. The complexity of this dinosaur mould is understated, but aspects such as its striking appearance, range of movement and perfect centre of gravity are no fluke.

In all, 75930 Indoraptor Rampage at Lockwood Estate makes for an interesting part of the Jurassic World: Fallen Kingdom range, but, in spite of its price, it doesn’t quite hit the high marks that a centrepiece set at the highest price point should. It suffers from the same compromises as the rest of the range – priority is given to the dinosaurs at the expense of a substantial build.

75930 Indoraptor Rampage at Lockwood Estate is available now at shop.LEGO.com. You can help support Brick Fanatics’ work by using our affiliate links.