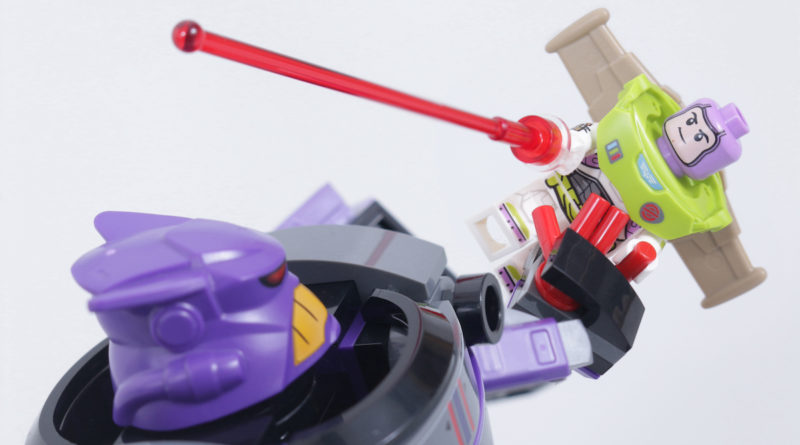 Back when we first met Zurg in 1999’s Toy Story 2, as antagonist to Buzz Lightyear, their relationship was a kitsch play on old sci-fi, mixed with poking fun at the iconic duel between Luke Skywalker and Darth Vader.

More than two decades later comes a harder, new-sci-fi interpretation of the big bad, played out within the Toy Story universe in Disney and Pixar’s Lightyear movie, which as has been pointed out, is a film Andy from Toy Story will have gone to watch within his world, and that would have been more realistic than he is.

Trying to wrap your head around the connotations of Lightyear as a creative enterprise isn’t worth it, but let’s be honest about what’s important here – it’s a Disney IP that has made for some way better LEGO sets than Toy Story has ever managed (7595 Army Men on Patrol notwithstanding).

This version of Zurg is reimagined and this time has legs (in contrast to 2010’s 7591 Construct-a-Zurg). He’s also got that same black and purple appearance all over, and his new head sculpt carries that same stylised robotic mask design. What’s most different – beyond being able to walk rather than shuffle – is the extra layer of detail that is plastered all over the design.

This is in-keeping with the other older Lightyear set, 76832 XL-15 Spaceship, and is at once a welcome surprise and quite a puzzle to understand. Just as with Buzz’s spaceship set, 76831 Zurg Battle feels almost camouflaged by the Lightyear branding and that 7+ age recommendation, for here is something so nicely put together and skilfully designed that it deserves wider recognition than the short window of interest a new film it is linked to can offer it.

There is admittedly limited motion in the knee joints, but otherwise across this LEGO version of Zurg is all sorts of articulation and, within that, playful expression to explore. The colour scheme has remained as toyful as the original version of the character, but the flashes of red throughout combined with selected stickers – while tricky to apply – add a further depth and detail to his all-round appearance.

This is a more smartly-designed mech than it has any need to be for the age recommendation, and for that it’s a positive surprise to build and mess around with. The design team could have taken a simpler or more junior approach to how to build Zurg here, but have leaned into the same ethos as the Lightyear movie this ties into, taking what was once junior and adding a layer of gravitas to the model.

That translates to a lot more pieces than you’d otherwise expect and any number of fun details and techniques included over Zurg’s body – even just the way his head is attached is unexpected and new.

The strength of design to Zurg here is important, given that only characters are otherwise included in the make-up of the set. So, for how it is so nicely put together and for how it interesting it looks once built, Zurg more than offers credibility to 76831 Zurg Battle.

It’s fair to say that we’ve never had a better LEGO Buzz Lightyear minifigure, and we’ve actually had a fair few up to this point. In 76831 Zurg Battle, though, comes one with printing on both arms and a depth to the torso and leg printing that absolutely gives credibility to this more ‘authentic’, filmic version of the character that inspired the version we saw in Toy Story.

The Toy Story Buzz was junior, brightly coloured and more basic in appearance and style. The Lightyear Buzz is a so much more mature approach to the character that reflects incredibly well in minifigure form thanks to the detail the LEGO team has gone to here. Everything that Buzz Lightyear the toy believed he was in Toy Story is captured wonderfully in the minifigure included in 76831 Zurg Battle.

It’s almost the same design for Izzy Hawthorne, only with different arm printing (Buzz’s arm printing in 76830 Zyclops Chase looks to be the same as Izzy’s here), which for those feeling the appeal of these minifigures, is more than okay – they are so good in design so as to feel quite collectible.

Also included is a neat mini robot build for E.R.I.C. (complete with robot eye technique that is sure to be copied a thousand times for how simple but effective it is), plus another inclusion for Sox, the robotic cat. In fact, the cat is the only one that appears exactly the same in more than one of the three LEGO Lightyear sets.

Zurg comes in at a satisfactory size and scale as adversary to Buzz Lightyear and there’s little to fault within the design and playability of the set, but there’s not enough physical LEGO to charge that amount. An extra side build or a piece of landscape or another minifigure would have been all that was needed to represent fairer value.

76831 Zurg Battle is a fun and surprisingly intuitive LEGO set to put together and mess around with. A vibrant colour scheme is complemented by a fine number of details across a clever and unique build. The two minifigures included are likewise very appealing and truly offer the best Buzz Lightyear minifigure we’ve had so far. All put together this looks and plays great, and has far more about it than most Toy Story LEGO sets from years gone by.

The only real stumbling block is in the price – just shave a little off the top and this becomes the perfect set to sit alongside the unmissable 76832 XL-15 Spaceship.

Support the work that Brick Fanatics does by purchasing your LEGO Lightyear sets through one of our affiliate links – thank you!

How long does it take to build LEGO Disney Lightyear 76831 Zurg Battle?

76831 Zurg Battle takes maybe 25 minutes to put together across just the two sets of numbered bags. Most of the time may actually be spent applying some tricky stickers.

How many pieces are included in LEGO Disney Lightyear 76831 Zurg Battle?

There are 261 pieces in 76831 Zurg Battle, including exclusive minifigures for Buzz Lightyear and Izzy Hawthorne, as well as Sox the robotic cat and a side-build for a robot characters named E.R.I.C.

Zurg from 76831 Zurg Battle stands 15cm tall and has a shoulder span of 9cm, while his feet measure 5cm in length.

How much does LEGO Disney Lightyear 76831 Zurg Battle cost?