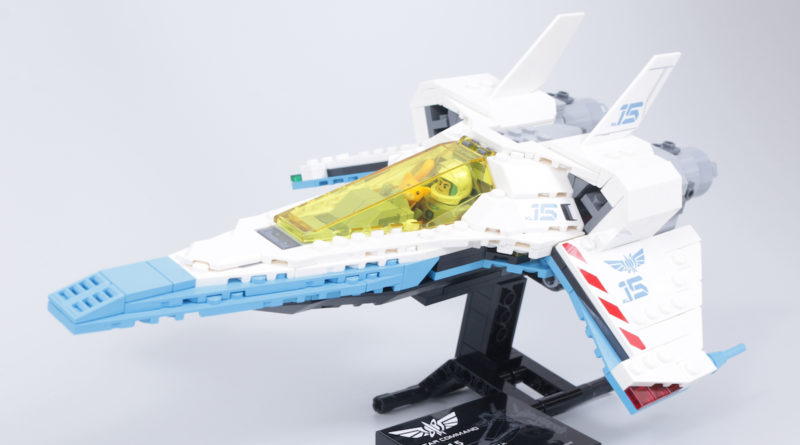 Disney and Pixar’s Lightyear LEGO set 76832 XL-15 Spaceship is one that offers an unexpected and very welcome glimpse into an alternate reality.

Believe it or not, we are nine years on from Galaxy Squad and the last time that the LEGO Group produced a Space theme or subtheme. LEGO CITY has taken us beyond Earth’s atmosphere for a number of NASA-inspired sets, and Friends has joined the NASA train just this month, but there has been nothing that has put fantasy-based spaceships, bases, astronauts and aliens together for almost an entire decade.

76832 XL-15 Spaceship is officially a LEGO Disney and Pixar’s Lightyear-themed set, but for how it has been put together with such a surprising amount of detail and care – and even if it’s meant to just look like the animated source material from the Disney + movie – it speaks to LEGO Space fans so profoundly.

This is one of those modern LEGO sets that looks as much like a custom build, put together by an expert LEGO fan, as it does something that the LEGO Group has focus-grouped and play-tested.

We have mentioned Galaxy Squad already and in colour scheme and general shaping, 76832 XL-15 Spaceship certainly has echoes of 70701 Swarm Interceptor from that theme, from the accents of mid-blue around a white, pointed central area to the vehicle, to the wings aggressively angled down and forwards like in attack mode, and even to the dual thruster engines at the back.

But further to that and the general Space vibes that emanate from this set, 76832 XL-15 Spaceship is a LEGO spaceship built and designed in 2022, and for that its design is all the more advanced as a result. It comes together from just shy of 500 pieces of plates, tiles and angled bricks in an intelligent and highly-detailed way – the box may say 8+, but this is a far more advanced LEGO spaceship than we’ve arguably ever seen from LEGO Space, which highlights not only how good and satisfying this particular set is, but how far behind Space has been left now.

The air intakes either side of the cockpit are a good example of the extra level of design in 76832 XL-15 Spaceship – they are these wonderful and accentuated, ‘off-square’ angles that have been created from bricks and pieces that flow down from the top of the ship and into the wings, and that are conversely being jaggedly met at the front by the slopes of bodywork. What could have been square in shape or moulded from one large piece is instead carefully plotted out across the build of the XL-15.

It’s various aspects like this that make 76832 XL-15 Spaceship such a curious LEGO spaceship to put together, and just as curious to look at and hold (read: play with) when complete.

There are some glorious techniques in place to complete the slanted wing look and fill in any gaps otherwise created and these are amazingly hidden in plain sight, and really speak to the extra level of finesse that has gone into this set’s overall design.

Little details like the control stick and the general look and feel of the entire cockpit are also a grade above what you would otherwise expect, thanks to a mix of printed and stickered parts that capture so much detail with relatively little. On top of this comes the piece-de-la-resistance – a brand new trans-yellow windshield.

As we say, it all makes for such a curious LEGO set – it’s fantastic in design and detail, packed with technique and shaping, and oozing such LEGO Space vibes. Yet, it’s also curious because alongside all that, it’s an 8+ set to tie in with a Disney+ property that is very much targeting the younger audience. This level of LEGO building shouldn’t be anywhere near such a set.

The final model comes in at a decent size for a one-man ship and even comes with a display stand that again is indicative of a much higher level than an 8+ LEGO set. The stand makes allowances for the wings that sit about half a millimetre below the undercarriage of the ship, preventing it from suitably resting on a flat surface. The stand also tilts the model for a more dynamic final touch to 76832 XL-15 Spaceship.

Four characters are included, and for those watching Lightyear they will all carry appeal in a number of ways, primarily all tied to how authentically they capture their respective character designs. Buzz Lightyear in his orange jumpsuit and choice of two heads makes for an excellent design, and one that also holds appeal too for those not necessarily interested in this specific iteration of the character, but who may be more broadly interested in a new, detailed spacesuit torso.

Likewise, the minifigures for Daryl Steel and Mo Morrison are at once both true to their on-screen appearances and also very interesting designs with an industrial space feel that again offers great creative flexibility to those thinking beyond the Toy Story universe. Even Sox, the robotic cat, works both as a specific design for Lightyear and as a simple cat to add to the collection.

The body armour for all three – but in particular for Daryl Steel and Mo Morrison – gives off particular Mandalorian vibes too, for their colours and the fact that piece debuted in a LEGO Mandalorian set in the first place.

The only possible criticism is in the printing of the eyes on the dark tan helmets for Daryl Steel and Mo Morrison. They are both off-centre and once you see it you can’t unsee it. For a set that is otherwise so beautifully precise, this tiny flaw is only accentuated.

The additional head for Buzz is a nice bonus we don’t usually see in LEGO sets today, and makes for a potentially grotesque sequence for the characters included, particularly with one eye on the size of their weapons…

As an 8+ LEGO set released to tie in with Disney and Pixar’s Lightyear movie, £44.99 / $49.99 / €49.99 is costly. This is a disposable IP much in the same way as the last Toy Story movie’s LEGO sets, or the Minions sets. On face value, that price for the lead set in such a theme that will generally hold only a small window of appeal to a wider audience is too high.

Yet, for how great 76832 XL-15 Spaceship actually is, for the sheer depth and breadth of design expertise that has gone into it, and for how all this speaks to LEGO Space fans way beyond those following the latest adventures of Buzz Lightyear, there is a lot of value to be felt in that price.

For the theme that this is a part of, 76832 XL-15 Spaceship risks being overlooked by the majority. It’s a tie-in set for a movie that won’t likely hold appeal beyond the younger demographic, that at face value is conversely priced rather high.

However, 76832 XL-15 Spaceship is actually such a sheer exploration and celebration of LEGO spaceship design that it stands to be one of the most collectible LEGO sets for future years, for those who overlook it during what is likely to be a short shelf life.

This LEGO set is as once what it needs to be for Disney and Pixar’s Lightyear, but then also so much more than that – it’s an opportunity for the LEGO Group to show off exactly what a LEGO Space set in 2022 can look like. It’s intricate, layered, playable, unique in shape and style and even celebrated in display. Take heed of this review – this may be camouflaged under the branding of Lightyear, but this is just as much the LEGO Space set we have been waiting almost a decade for.

(Yes, we are aware of the irony that is Disney creating this opportunity to venture into LEGO Space, given the general perception that Disney-owned Star Wars is the reason we don’t have LEGO Space themes at the moment.)

Support the work that Brick Fanatics does by purchasing your LEGO Space – sorry, Toy Story – sets through one of our affiliate links.

It takes around 30 to 45 minutes to put together 76832 XL-15 Spaceship across an intricate and fun build spread over five sets of numbered bags.

There are 497 pieces included in 76832 XL-15 Spaceship, with minifigures for Buzz Lightyear, Daryl Steel and Mo Morrison, as well as a yellow (robotic) cat called Sox.

As one half of Tiro Media Ltd, I mix a passion for print and digital media production with a deep love of LEGO and can often be found on these pages eulogising about LEGO Batman, digging deeper into the LEGO Group’s inner workings, or just complaining about the price of the latest LEGO Star Wars set. Make a great impression when you meet me in person by praising EXO-FORCE as the greatest LEGO theme of all time. Follow me on Twitter @RobPaton or drop me an email at [email protected]om.