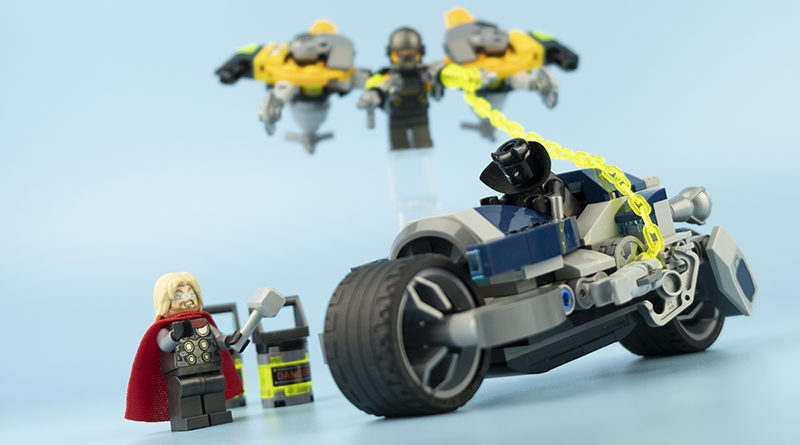 Black Panther is on the ground, but an AIM agent is in the air! Do the two parts of this set combine for a thrilling chase?

Inspired by the delayed Avengers video game, 76142 Speeder Bike Attack features Black Panther on a dark blue speeder bike and an AIM agent flying with a jetpack. Thor is thrown in too for additional heroism.

Starting with the Speeder Bike mentioned in the title, it is quite a clever little construction. It is reminiscent of the Bap-pod from The Dark Knight, thanks to its two large wheels at the front and back. Considering that two fairly large moulded parts are used, the shape turns out really nice and sleek.

The dark blue and grey colour scheme feels a bit bland unfortunately, this would have been better had it been more appropriately colours for Black Panther. Speaking of the character, he slots in nicely for a nice, lying posture.

A bit more interesting is the jetpack for the AIM agent. The yellow and grey colour scheme works really well and is quite unique. The use of Mixels joints allows the two hovering sections to be posed in different ways to simulate the minifigure being in flight.

The disappointing thing about this set is the bag of weapons. Small moulded parts are used with trans elements to be launched from stud shooters. They seem designed to make young boys say ‘wow, cool’, which is fine, but it would have been nice to instead impress them by demonstrating how nice parts usage can realise a little bomb or gizmo.

All of the minifigures are unique to this set, although they are not all distinctive enough for Marvel maniacs to hunt down. Black Panther features nice torso detailing and the collar works really well for the character.

The villain of the piece is neat, fitting the henchman mould well with a visor covered face and armoured torso with the ‘AIM’ logo on it. Contrasting with the arms, the black gloves are a nice touch,

This set is not the most interesting LEGO Marvel Avengers release, but it’s good value and delivers what it sets out to.

76142 Speeder Bike Attack is available now at LEGO.com. You can help support Brick Fanatics’ work by using our affiliate links.