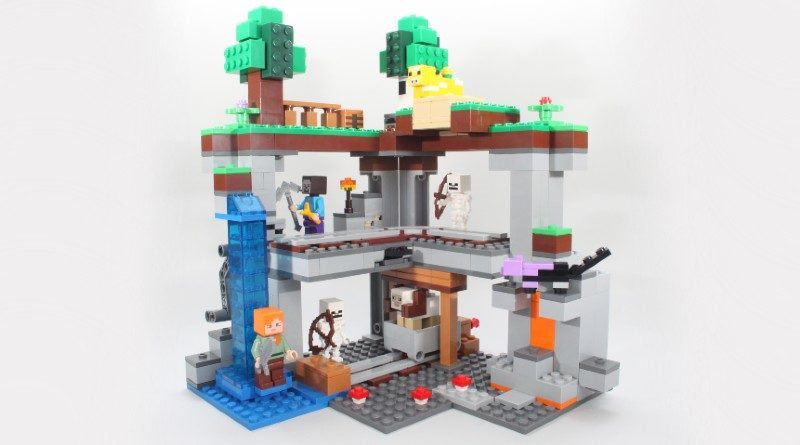 LEGO Minecraft 21169 The First Adventure comes in as the cheapest multi-level mine set to date – but with its source material already cancelled, is the writing on the wall for this blocky build?

21169 The First Adventure draws specifically on Minecraft Earth, a game that will soon shut down after over a year of operation. That fate might not bode well for the build, unless it can manage to set itself apart as a must-have for any Minecraft fan.

The concept of a larger mine set isn’t anything new to the LEGO Minecraft theme, and has been executed just four times before over the past seven years. The trend started in 2014 with 21118 The Mine, one of the quintessential Minecraft models that has gone on to fetch a pretty penny on the secondary market.

These multi-level mine models have become a mainstay in the theme, with 21137 The Mountain Cave remaining the largest LEGO Minecraft build to date. 21169 The First Adventure therefore has some big and blocky boots to fill, but the designers of this set seem to have applied plenty of lessons learned along the way.

That’s most obvious in the large grey pylon elements that anchor both levels of the model together. They are shown as an integral part of the structure with multiple attachments to various points throughout the set during almost the entire build.

While it may seem tedious during construction, it makes for a refreshingly complex experience compared to the usual LEGO Minecraft models. It also makes the set surprisingly secure: you won’t need to worry about segments breaking off while handling it, apart from the ores – but that’s by design.

Otherwise, it’s nothing too different than what can be found in other LEGO Minecraft sets, with plenty of grey, brown and green pieces occasionally offset by a mob (the Minecraft term for creature) or ores. However, even the mobs are more varied than that of other models, as we’ll touch upon later.

It’s no secret that this set is based on the spin-off mobile game Minecraft Earth, which saw players able to have block-based adventures in the real world, with AR technology replacing portions of reality with chunks of Minecraft. These could then be interacted with to earn rewards and items for the next adventure.

That concept may not have panned out as Mojang intended, with the app shutting down this year, but the set does give off a sense of exploration thanks to its cuboid and open nature – it’s hard to resist looking around every nook and cranny, positioning the characters as you go.

When comparing 21169 The First Adventure to the video game world of Minecraft, there are few inconsistencies. Great care has clearly been taken to be able to incorporate this set into a larger display or have it as a standalone piece.

The edges of the build, where the blocky plastic meets the real world, are designed to be somewhat uneven with the upper layer of grass mixing with the monotone stone below. It’s a good representation of what can happen with the world generation in Minecraft and makes the set feel like a true slice of the video game world.

As far as play features go, there are five major functions, but arguably the set itself is rife with possibilities for roleplay given the wide array of characters included. At the very bottom of the model, you’ll find a stream of lava pouring harmlessly down behind a stone wall, but twist the nearby block and Alex may find herself in a hot mess.

Nearby, the sheep rides a minecart on a small length of track, and flicking a Technic pin at the back of the model shoots the sheep forward – possibly into the water, if you want to remove the wooden buffer. The level above features more tracks, but one of these sections is more unstable than the rest, and can be ejected from the set by pushing the corresponding lever. No TNT can be found near either of these functions, suggesting some manual player sabotage.

Connecting the two floors is a waterfall, which can transport minifigures between them using a watery platform. Alternatively, the mechanism can be locked in place for display. Ascending to the tree-toting top of the set we can find the final function, which is another reference to Minecraft’s ‘interesting’ world generation.

Some sand is depicted as floating in the air, but activate a nearby trigger and you’ll send the blocks falling on to the unsuspecting skeletons below. Overall, it’s not a bad array of play features considering the size and price of the set, and – more importantly – they’re all very appropriate to the theme.

Included in 21169 The First Adventure are a sheep, cow, ocelot, two skeletons and the players, Steve and Alex. Those first three are not the normal versions you can find in most Minecraft sets, though, with appearances taken directly from Minecraft Earth. Instead, you’ll find yourself adding a horned sheep, dyed cat and moobloom to your mob menagerie.

These new LEGO variants of the classic creatures are well executed and the colourful appearance of each complements both the rest of the set and the regular Minecraft minifigures also included.

At £54.99 / $69.99 / €59.99, 21169 The First Adventure is by far the cheapest of the LEGO Minecraft mine sets, but still manages to maintain a sense of value through its scale and unique mobs. The piece count may not be generous, but the larger bricks included within help increase the model’s size, increasing its value further still.

The listed price for 21169 The First Adventure feels exactly right for what you get, and that cost positions it as a great first LEGO Minecraft set – as long as you’re wanting a larger build to represent the theme that won’t break the bank.

For a set named 21169 The First Adventure, this model shows that it is not the first of its kind and demonstrates the lessons the LEGO Minecraft designers have learned over the past seven years, coming in as a culmination of new techniques, pieces and ideas.

While the game it is based off may be coming to an unfortunate end, it’s safe to say that 21169 The First Adventure has accurately captured the main feature of the spin-off, while also standing on its own two feet amongst the wider theme and the LEGO Group’s constantly-growing catalogue.

In short, 21169 The First Adventure is an excellent LEGO Minecraft model to build, play with or display, and makes a suitable choice for both long-time fans of the theme and newcomers just wanting a taste of what to expect.

You can help support Brick Fanatics’ work by purchasing 21169 The First Adventure (or any other LEGO Minecraft sets!) through one of our affiliate links. Thank you!

How long does it take to build LEGO Minecraft 21169 The First Adventure?

21169 The First Adventure will likely take you just under an hour to build, with the model being a fairly simplistic but substantial experience. It might be more enjoyable to take your time with the build, appreciating the individual blocks as you go.

How many pieces are in LEGO Minecraft 21169 The First Adventure?

21169 The First Adventure contains 542 pieces, of which 14 are printed with no stickers to apply. That piece count makes it the smallest of the theme’s multi-level mine sets.

How big is LEGO Minecraft 21169 The First Adventure?

21169 The First Adventure measures 24cm tall, 19cm long, and 18cm wide with no option to fold the set into a smaller size, a feature seen in Minecraft models including 21147 The Bedrock Adventures.

How much does LEGO Minecraft 21169 The First Adventure cost?