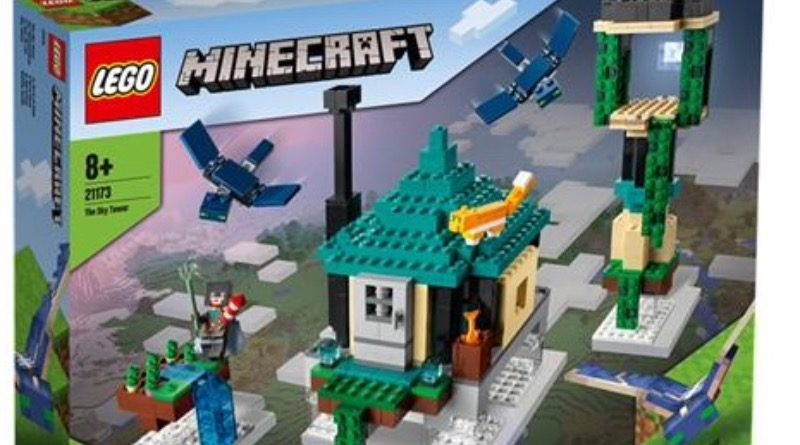 LEGO fans with a keen eye will have spotted that the Minecraft minifigures in the summer sets that were just announced have had a substantial gear upgrade.

The first images of 21173 The Sky Tower show a minifigure clad in a Netherite helmet, with a trident in one hand, a firework in the other, and Elytra on their back. None of this kit has been seen before in LEGO form and all of them are pretty hard to get in the game itself.

Clearly, this minifigure has been to an End City and back to get their Elytra wings and knows enough about flying with them to realise that fireworks are the only way to stay in the sky for longer periods of time. Although it’s not too hard to kill a Drowned and hope they drop a trident, it’s still a pretty rare weapon to have in your arsenal.

What’s more exciting to see though is the Netherite helmet. Alongside the new skins on minifigures in several of the new LEGO Minecraft sets, having a new level of armour is definitely a step up. In case you don’t know, Netherite armour can only be made from ancient debris, which can itself only be found as a rare ore in the Nether.

With four pieces of ancient debris (smelted into Netherite scraps) and four gold ingots, you can make a single Netherite ingot. Combine it with a diamond helmet and you’ve finally got yourself a Netherite helmet. That minifigure went through a lot to get that added protection – and lucky that they did, with two Phantoms flying overhead.

Who knows what other upgrades LEGO Minecraft sets might receive soon, with the videogame’s Caves update due to be released this year. We will of course keep you updated if we hear anything but, for now, these initial five sets are likely all we will have for the summer.