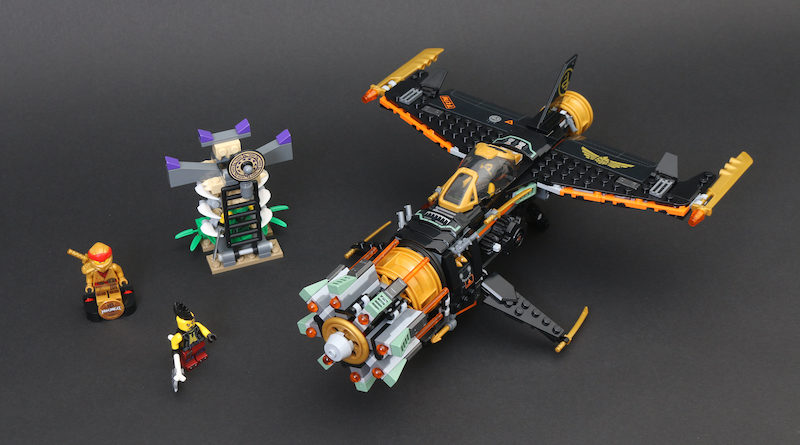 Based on 2015’s 70747 Cole’s Boulder Blaster, 71736 Boulder Blaster is – on first impressions – remarkably similar. It’s priced £10 / $10 more, and for that you receive an additional 213 pieces, almost doubling the piece count of the original. You also receive one extra minifigure as part of the package. But looking at the two sets makes for an initially surprising and somewhat tricky comparison – there’s not that much between them, right?

Wrong: there’s plenty to appreciate how much of an upgrade 71736 Boulder Blaster actually is, but these are details best felt in hand, rather than observed in box art.

Appearing in Season 4 of the NINJAGO TV series, the Boulder Blaster is a flying vehicle with a weird and unusual shape to it and for that reason, reimagining its design six years later is decidedly difficult. It makes it all the more interesting, then, that the NINJAGO design team chose not to do what they’ve done across some of the other Legacy sets and go much bigger or much smaller in putting together 71736 Boulder Blaster.

Instead, for what is essentially a similarly-sized model (if slightly larger), 71736 Boulder Blaster fine-tunes the complexities of 70747 Cole’s Boulder Blaster to create a sleeker, stronger and more aesthetically complete version.

This is primarily realised through filling out some areas of the Boulder Blaster with intricate placement of pieces, and other areas by taking out large, bulky parts and replacing them with a selection of smaller pieces. Whilst the wings may look pretty similar between the two models, the newer version’s are an almost entirely new build, as are the cockpit, fuselage and front-end rapid shooter/engine.

The original version of the Boulder Blaster was focused on the play mechanism, and achieving that within budget back in 2015 meant that there were design compromises elsewhere. These were most notably felt in the lightweight nature of the entire build, and the gaps between canopy and cockpit.

This 2021 upgrade substantially improves in both these areas to give the vehicle greater identity away from what is still a fun and fully functional play feature. Indeed, 71736 Boulder Blaster is a solid, sturdy and more true realisation of what the vehicle in the show could really be, bringing play value and display potential to a model that is still primarily unique for a well-designed rotating firing mechanism at its core.

Four minifigures are included, with Cole and Lloyd returning from their 2015 appearance in 70747 Cole’s Boulder Blaster, and this time they are joined by Eyezor and Legacy Kai.

The original version of this model included Anacondrai Warrior Sleven and Anacondrai General Zugu, but perhaps as a nod to 70746 Condrai Copter Attack (the set 70747 Cole’s Boulder Blaster was paired with), it is Anacondrai General Eyezor that is included here. He was one of the most interesting minifigures back in 2015’s range, and the same can be said of the quartet he is a part of in 71736 Boulder Blaster. That missing eye and facial tattoo make for a simple but menacing and notable appearance, where the likes of Cole and Lloyd are 10 a penny in most NINJAGO collections by now.

Legacy Kai is for the real collectors picking up all the Legacy sets in this range, as part of a selection of golden ninja minifigures to mark NINJAGO’s 10-year anniversary. Shiny and gold, you can tell the real appeal to him is in lining him up with the other ninja.

It’s great to look at from all angles now, it’s a good size and it’s well-designed to survive swooshing around the house, while at the centre of its design remains a very fun play feature for right- and left-handed LEGO fans. With the minifigure line-up too, there’s little to complain about what you get for the money.

The NINJAGO Legacy line could be uninspired. It could be a collection of re-releases with few discernible differences between what came out and was popular five or six years ago and what the LEGO Group hopes will be popular again now. Instead, this Legacy set takes the same creative energy that the original model harnessed and goes from there, setting about to not only improve structural and aesthetic areas of the model, but to totally reimagine its potential as a great LEGO set. What 70747 Cole’s Boulder Blaster did so well, 71736 Boulder Blaster does even better, and where 70747 Cole’s Boulder Blaster felt simple, 71736 Boulder Blaster more than advances.

71736 Boulder Blaster is another fine example of how NINJAGO Legacy is doing wonders. These aren’t re-releases – they’re re-imaginings, and ones that take already great LEGO models and make them truly fantastic.

LEGO NINJAGO Legacy 71736 Boulder Blaster is available at LEGO.com from January 1, 2021 – support the work that Brick Fanatics does by purchasing your LEGO through one of our affiliate links.