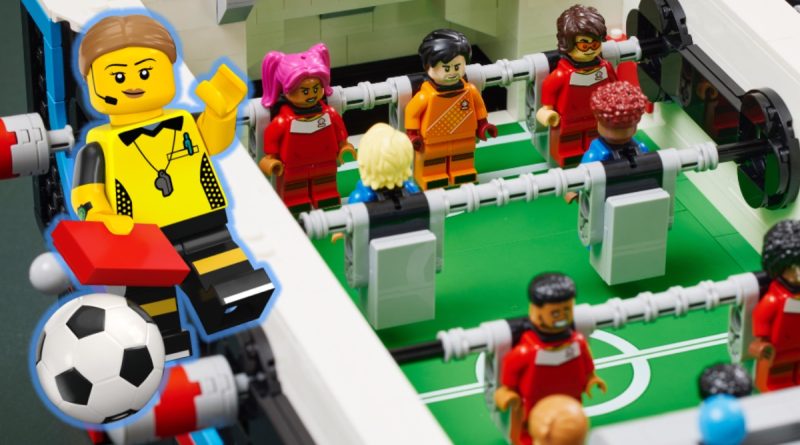 71037 Series 24 includes a brand new referee minifigure – but it arguably represents another own goal for LEGO Ideas 21337 Table Football.

A set already mired in controversy for departing so heavily from the original concept, 21337 Table Football has suffered heavily from the laws of physics. In fact, the design team were so beset by stability issues during development that the entire product was almost cancelled altogether, before a compromise was found: scaling back from an 11-a-side pitch to two teams of five-a-side.

Which would have been fine, had the LEGO Group not seemingly already committed to its price point of £214.99 / $249.99 / €249.99. The set has consequently been padded out with a whopping 22 minifigures, including 44 different heads and 43 different hairpieces. It’s a diverse selection too, with a mix of skin tones in play for the first time in a non-licensed set – and that’s great. Nobody’s arguing with that.

But what it does mean is that 21337 Table Football is going to have a really hard time cracking the football market, because – as my colleague Rob has already outlined – it doesn’t quite work for football fans. The minifigures lean too much in the direction of foosball players rather than football players in design, conflicting with the intention of delivering two full squads in a single box.

The result is that 21337 Table Football is ultimately pulled in two different directions, and thanks to its price making it a tough ask for the casual foosball player, it doesn’t really speak to either of its audiences fully. And its flaws are really only embellished by the presence of the brand new and highly-detailed referee minifigure in 71037 Series 24 – in more ways than one.

First, let’s consider the basic design of the referee: with dual-moulded arms and printed shorts, she’s leagues ahead of the long-sleeved players in 21337 Table Football, whose shorts are also communicated very poorly. Simply by contrast, this £3.49 minifigure has shown up all 22 minifigures in a £214.99 / $249.99 / €249.99 set.

That clash doesn’t stop the ref working with 21337 Table Football, though. The real obstacle here is that, like all Collectible Minifigures, she’s yellow rather than realistically skin-toned. You can’t fit a referee on the table anyway, obviously, but as a complement to the two full teams that 21337 is clearly trying to offer, she feels completely at odds with the LEGO Ideas set – from her yellow skin tone to her superior design.

But that’s all dependent on linking up 71037 Series 24 with 21337 Table Football. And maybe I’m just conflating two products that, in the LEGO Group’s eyes, don’t necessarily go together. Okay – but then a problem still exists. It’s just a different one: here is a referee with no football players to actually referee.

She’s well-timed, for sure, given we’ll be coming off the back of both the Euros and the FIFA World Cup by January. But again, if the LEGO Group is serious about tapping into that football market, where’s the resurgent Sports theme ready for the World Cup? Football fever is at an all-time high, even if this particular tournament is far more controversial than just 21337 Table Football’s design decisions, and in many ways 71037 Series 24’s referee feels like too little, too late.

But she wouldn’t if she had two full teams of authentic, well-designed football players to go alongside her. If only there was a LEGO set that could have given us those…

71037 Series 24 launches January 1, while 21337 Table Football is available now. Check out our full review of the LEGO Ideas set here, or head here for more on why it falls just short of appealing to the football market.

One thought on “Column: LEGO’s new referee minifigure is another own goal for 21337 Table Football”