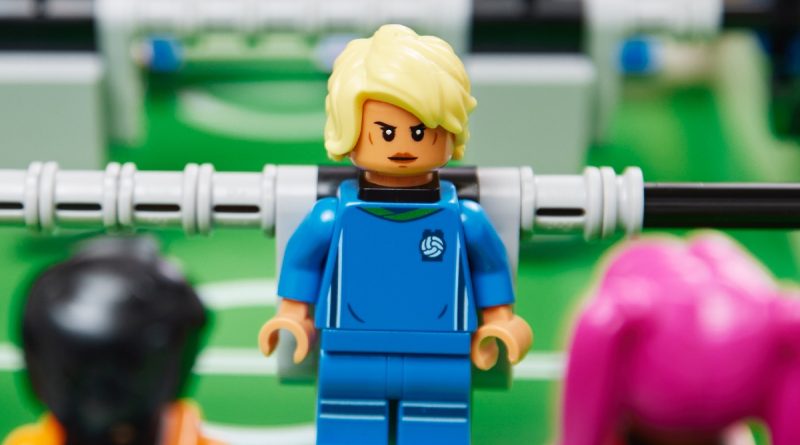 The LEGO Group has explained why the newly-revealed 21337 Table Football is the first non-licensed set to include skin-toned minifigures.

Unveiled earlier today, the latest LEGO Ideas set scales back Donát Fehérvári’s full-sized foosball table in favour of a five-a-side pitch, which means there’s room for exactly 10 minifigures in play (quick maths). But upon opening the box, you’ll actually be greeted by a total of 22 minifigures, complete with a whopping 44 different heads and 43 different hairpieces.

There’s room for the extras to sit in a brick-built stand that sits separate to the main build, just in case you want spectators for your tabletop game. But more interesting than the sheer quantity of minifigure elements in 21337 Table Football is the fact that they encompass a variety of different skin tones, which marks the first time a non-licensed set has moved away from yellow minifigures.

According to the LEGO Ideas team, the reason is simple: it’s all about ‘representation, diversity and inclusivity’.

“We really want to promote that this set is for everyone, which is why we are offering this set with skin-toned minifigures so that everyone has the opportunity to see themselves in one of these characters, and you can mix and match the characters however you want,” LEGO designer Samuel Johnson told Brickset.

“There are characters with new glasses, sports goggles, with hearing aids, and we have all the different hairstyles you could possibly want. Some of them are exclusive to the set, in new colours. We’ve made new facial decorations for the set as well, a lot of what we might call generic characters, but they all have their own individual personality and features, so I hope you really enjoy the way they look.”

The decision to include both male and female players was apparently not a consequence of the success of the women’s Euros this summer, however, nor the fact that the LEGO Group was one of the tournament’s sponsors. According to Johnson, it was actually made ‘way before then’.

“We wanted to make everyone feel represented,” he explained. “It’s about representation, diversity and inclusivity. Football is not for men only, it’s for everyone. So we want to make families come together, we want to make people play, have fun for the love of football. So I think that it doesn’t matter who you are, we want it to look like you should be able to play.

“We really had a very strong push from our side to make this a product that represents everyone.”

While the rest of the LEGO Group’s non-licensed themes are still clinging on to yellow minifigures – from CITY and NINJAGO to Creator 3-in-1 and Monkie Kid – it’s not hard to imagine a world where this reasoning eventually extends to those product lines, too. For the moment, 21337 Table Football is the first set to really break the minifigure mould.