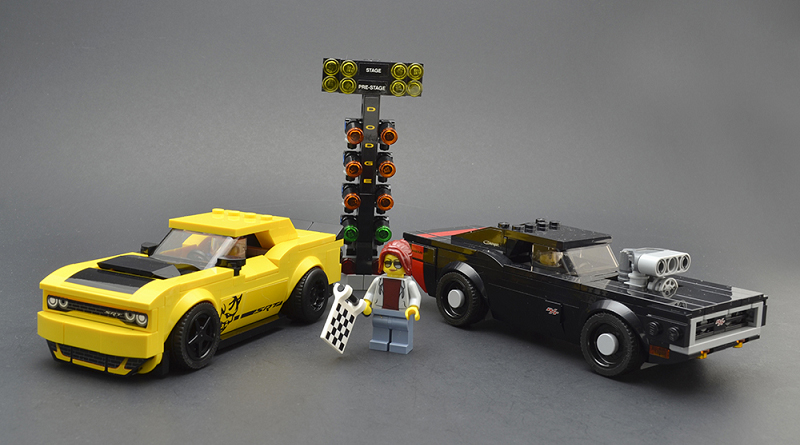 As the Speed Champions theme expands into an ever growing range of car styles, one category it seems to excel in is muscle cars. The classic American muscle car is known for its high powered engine as well as a body style that walks a fine line between big and boxy and athletically curvy. Minifigure scale seems to create the perfect storm for this aesthetic. 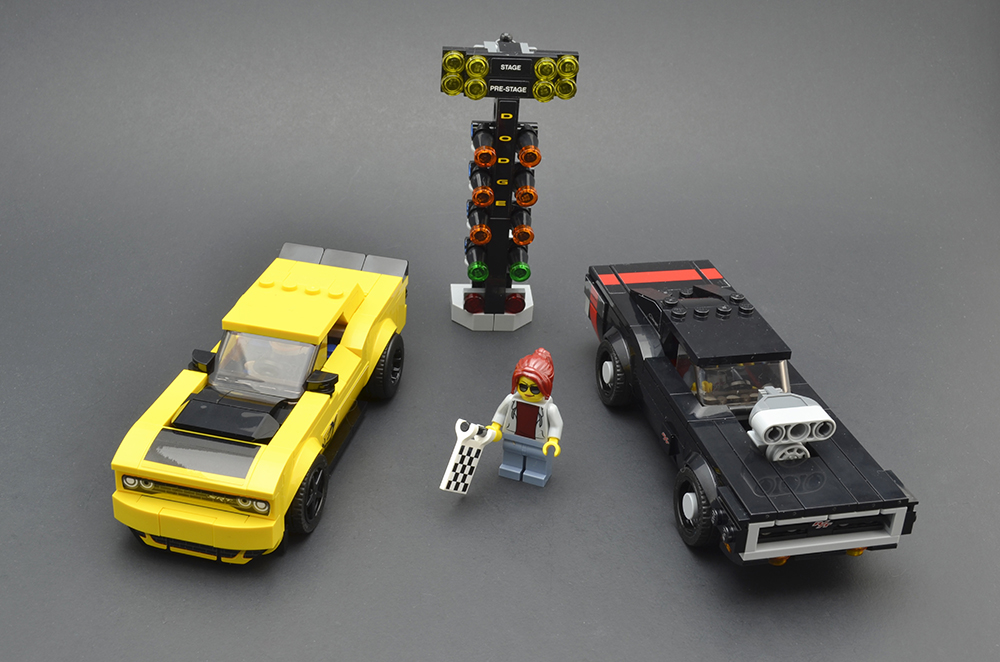 Following 2018’s excellent 75884 1968 Ford Mustang Fastback, this pairing of modern and classic Dodge dragsters continues the tradition of brick-built American muscle. Starting with the 1970 Charger – which came out at the tail end of the second generation of the lineage – we see subtle modeling used to render small, but important details.

Examples can be seen in the curved inverted slopes at the front of the car, as well as the thick rear bumper, which makes nice use of the ingot tiles. There is also some clever, mathy design that went into the face of the car, with a mostly successful gray frame around the iconic grill-obscured headlights. It does leave a bit of a bulge, but that’s a subjective quibble. Another fun feature of this car is the ability to easily swap out the (disproportionately) large blower for a standard hood.

Moving to the SRT Demon, this supercharged monster looks lighting fast in yellow. Like its classic compatriot, the Challenger is an exercise in subtlety. One of my favorite design choices is the use of the wing (typically used as a spoiler) used in the hood to create the beefy, low profile intake.

Like a lot of other Speed Champions builds, the Challenger uses stickers to represent the front grille and headlights (in addition to the brand livery at the sides). The tail lights however are printed, and look terrific. I realise that the shape of the headlights are peculiar to this car, so perhaps standard round brick-built lights weren’t the most appropriate. How about moulding the same parts used to create the rear lights in clear or trans-black? There are a number of elements I’d love to see moulded in trans colours for these sets. Granted, they may not end up being quite as accurate to the real car, but I think they could produce a better looking model overall, and would certainly find a vibrant afterlife within the building community.

The final build in 75893 2018 Dodge Challenger SRT Demon and 1970 Dodge Charger R/T isn’t simply an aesthetic backdrop, it’s also functional. The starting line lights are designed in such a way that by moving a switch at the back down the column, all of the lights pop up in sequence. Not only is it a clever build, but also fun to play with.

The set also comes with three minifigures – two drivers and a race official. The Demon racing suit is absolutely amazing. It is printed front and back with the logo and text. It’s so cool I’m tempted to buy multiples of this set just to have a bunch of this figure. Only a printed helmet could have made it better.

This set delivers the goods in terms of both looks as well as build experience, and with a very reasonable price point, it’s easy to recommend this set. It is perfect for fans of the theme, as well as car enthusiasts in general.