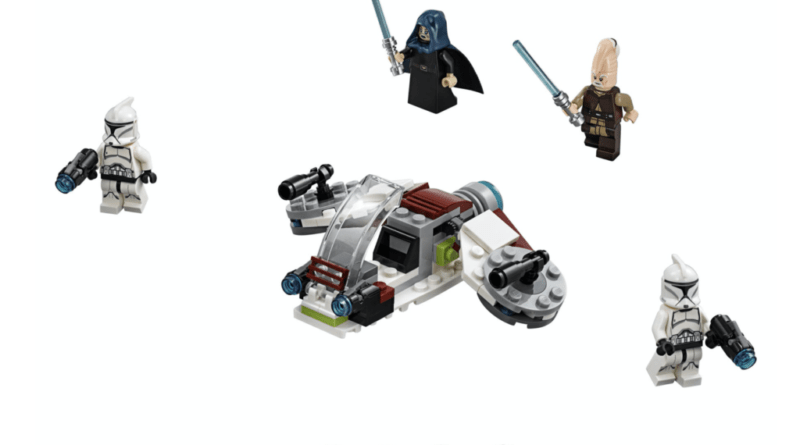 Fans who can name more than five Jedi are doing really well (Luke Skywalker, Anakin Skywalker, Yoda, Obi-Wan Kenobi and at a push maybe Qui-Gon Jinn). With the release of 75206 Jedi and Clone Troopers Battle Pack, though, the LEGO Group has delved deeply into obscure lightsaber-wielding peacekeepers, choosing two from Episode II: Attack of the Clones who are not even mentioned by name in the film – Jedi Master Ki-Adi-Mundi and Jedi Padawan Barriss Offee.

It’s only Ki-Adi-Mundi’s second time as a minifigure and his first was based on his appearance in The Clone Wars television series. If you thought Porgs had big eyes, then check out any minifigure from those sets. There’s wonderfully detailed printing on his robes and his headpiece portrays his large head perfectly. For geek points, Ki-Adi-Mundi has a larger head as Cereans have two brains.

Barriss Offee has had two other minifigures released – this latest version utilises the more accurate dark blue colour scheme for her detailing, whilst the printing on her face represents her Mirialan markings along with a realistic pale green. The new skirt piece works well for Barriss’ dress and her torso has good detail, although unfortunately it’s difficult to see because of the similar dark colours.

LEGO Star Wars army builders will particularly appreciate the regular Phase 1 (even more geek points) Clone Troopers included with this set. With no markings denoting rank, they’re perfect as background forces. The only slightly frustrating thing is that they come with stud-shooters rather than authentic blaster pistols.

The mini-build is the main part of this set and is loosely inspired by the shape and colours of a Republic Gunship. It’s quite dull and doesn’t really add much to this set at all. With so few pieces dedicated to the speeder, it also has structural voids – like a windshield canopy yet no sides.

Most battle packs are released as ‘duos’ with one coming with the good guys, and one with the bad guys – for instance 75131 Resistance Trooper Pack being released alongside 75132 First Order Battle Pack. This encourages role play and can make the sets more fun. In this case, 75206 is completely alone with no Separatist forces to accompany/challenge it.

75206 Jedi and Clone Troopers Battle Pack is a battle pack alone, with a forced design that doesn’t work. How much this set appeals will depend solely on the minifigures, specifically how many Clones need amassing and how many obscure Jedi characters the collection needs.

75206 Jedi and Clone Troopers Battle Pack is available now at shop.LEGO.com. You can help support Brick Fanatics’ work by using our affiliate links.