To steal a valuable stash of coaxium from the Empire, Beckett’s crew need 75219 AT-Hauler. This new LEGO Star Wars set gives fans the opportunity to recreate the thrilling heist sequence from Solo: A Star Wars Story

A heist getaway vehicle needs to be able to do at least two things – carry the crew away from the crime scene and hold all the loot. Tobias Beckett and his team of misfits opt to steal an Imperial AT-Hauler, which fits the bill perfectly on both fronts, for their getaway vehicle in Solo: A Star Wars Story. Their plan, to steal Coaxium from the Empire, involves derailing the Conveyex Transport before carrying it away with the AT-Hauler. 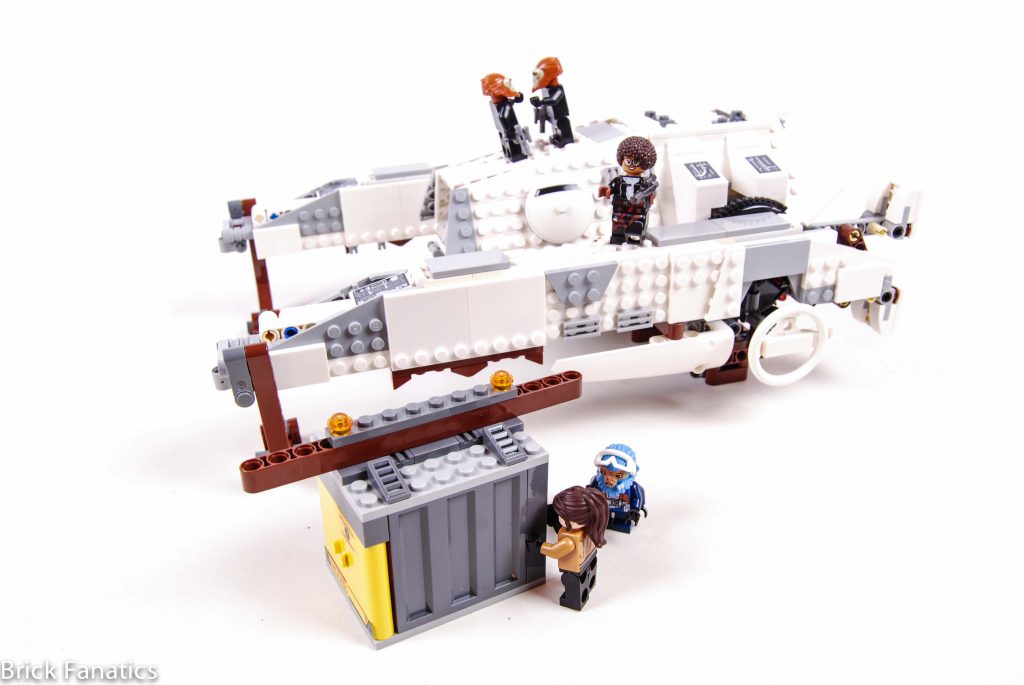 The galaxy far far away is full of amazing and fantastic ships. From massive, awe inspiring Star Destroyers, through lightning fast podracers, to sleek luxury liners, dazzling star ships abound. Not everything is at the luxury end of the spectrum, some folks need to go to work and for that you need utility type ships. Enter the AT-Hauler, which essentially fills the role of those large cargo cranes seen at ports the world over. It is designed to do one job and do it well – lift and move cargo containers. While perhaps not as glamorous a role as other starships in the Star Wars universe there can be no doubt that this is a absolutely essential one, but does it make a good LEGO set?

LEGO Star Wars, and Star Wars in general lately, has been accused of repetition. Whether it is the same ship multiple times over, such as the Snowspeeder, or a new but barely different starfighter thrown in, the sheer volume of it all has gotten to be a bit much; how many different types of blaster laden starfighters is enough? In light of that, 75219 AT-Hauler is a breath of fresh air. Sporting nothing more than a pair of stud shooters, this is a ship which has both a distinct look and distinct set of play options which make it stand out from other currently available products. Adequate execution of the source material combines with these two facts to create a set that probably doesn’t belong on the top of your wanted list, but should also not be at the bottom.

While moving freight is referenced a lot in Star Wars movies, Solo was one of the first times we have actually gotten to see it done. AT-Haulers have rotating mandibles that can hook on each side of cargo containers to lift them. The LEGO Group has re-created that capability in 75219 AT-Hauler. This set can lift the included cargo container, and even 75217 Imperial Conveyex Transport. Well applied points of contact make the hold tighter than one expects it to be and the container remains in place for even vigorous swooshing, but is also easily disconnected via the mandibles’ ability to swiftly rotate out which swings the hook away for swift detachment. The functionality of it is quite pleasing and will not frustrate kids trying to play out cargo hauling the Star Wars universe.

Friction joints created via gears hold the mandibles in place both horizontally for flight and vertically for landing. Unlike some other sets with rotating wings, the AT-Hauler must have its mandibles vertical for landing or it will tip down onto the nose.

The cockpit is the main area that disappoints. Unlike in the film, where it can seat multiple people, only a single seat is available for Rio Durant. His minifigure is fantastic and features both a new headpiece and dual arm component to mimic his four appendages – that is two new molds for a single figure. The cockpit feels like it wastes a lot of space because the area behind Rio’s seat is just covered over. With a bit of ingenuity, this space could have been used to expand the seating which would have been a significant improvement.

Solo: A Star Wars Story has spawned some decent LEGO sets, 75219 AT-Hauler among them. It provides a unique playset, rife with possibilities for storytelling, includes an excellent assortment of minifigures, and is a satisfying build. It will likely be a long time before the LEGO Group returns to this source material so collectors would do well to snap up this model while they can.

75219 AT-Hauler is available now at shop.lego.com. You can help support Brick Fanatics’ work by using our affiliate links.