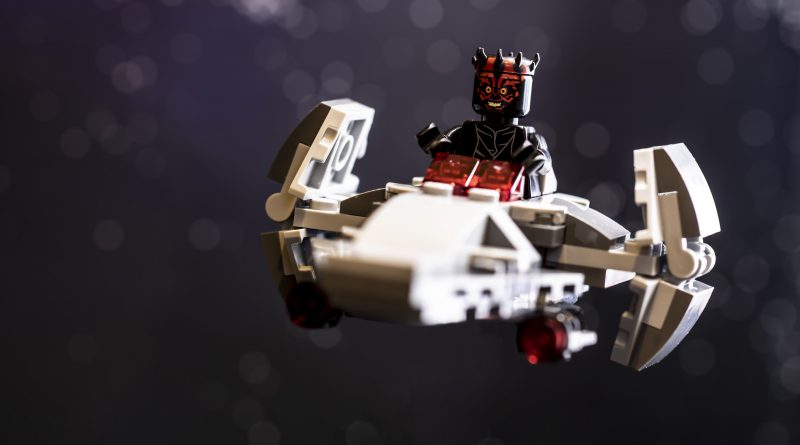 75224 Sith Infiltrator Microfighter is one of two new LEGO Star Wars Microfighters in the latest wave of releases, appropriately both based on Star Wars: The Phantom Menace – which celebrates its 20th anniversary this year. This set allows fans to construct a stylised Sith Infiltrator in dark bluish grey and includes a Darth Maul minifigure. 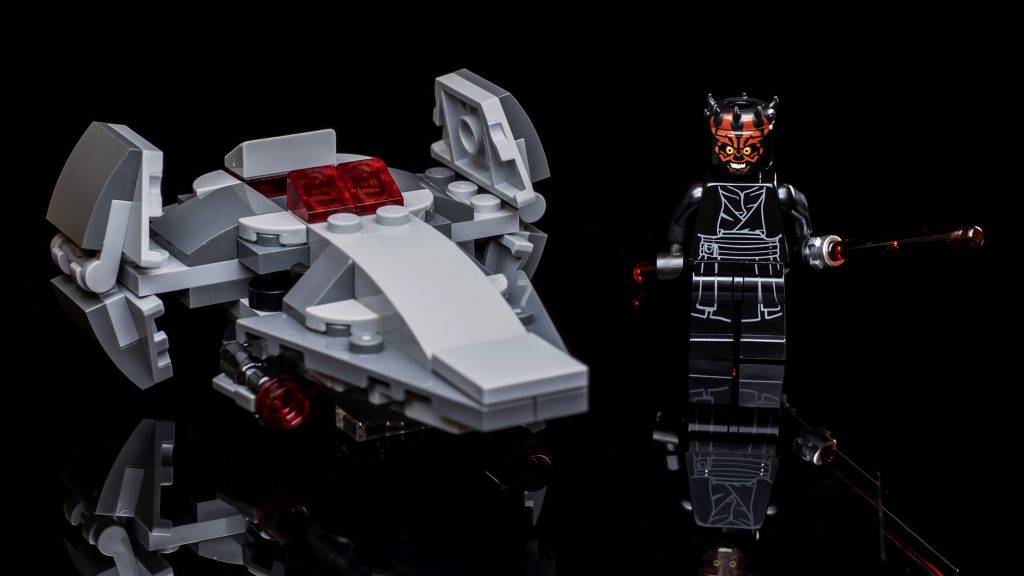 Like most Microfighters, this is a greatly pared down representation of the starship that it is based on, that still retains a lot of the angles and shaping that makes the Sith Infiltrator so iconic. The iconic curved wings are particularly effective, especially when considering how simply they are constructed.

There is some really clever part usage, such as the black minifigure roller skates that add nice detailing throughout the model. It is a welcome addition by the designers as they could have achieved the same effect using simpler parts, but that little touch of extra detail just lifts this set.

Stud shooters on microfighters have sometimes looked awkward and tacked on. Here they integrate nicely to fit with the overall look of the set and are actually quite well hidden under the fuselage.

Unfortunately there are two major flaws with 75224 Sith Infiltrator Microfighter. The front doesn’t quite feel long enough, it is a little squat and could benefit from being a few studs longer at the front. The view from the side feels very blocky and lets the overall design down.

Since his first appearance, subsequent ‘death’ in The Phantom Menace, followed by his revival in The Clone Wars and appearances in Rebels and Solo, Maul has been a popular character. Currently there are nine LEGO variants of the character’s minifigure and in this set there is nothing new to be had. Darth Maul is the same variant that is in 75169 Duel on Naboo. That is not to say that it is a bad thing. The torso printing representing his flowing Sith robes, that continues onto the legs, is very well designed. The face has a suitably menacing expression and he comes with his trademark duel lightsaber – possibly the coolest saber in the galaxy.

A microfighter is never going to set the pulses of fans racing, but this is a cheap way to get a great looking Darth Maul minifigure as well as a decent, yet small, representation of the Sith Infiltrator that definitely has some appeal.

75224 Sith Infiltrator Microfighter is available now at shop.LEGO.com. You can help support Brick Fanatics’ work by using our affiliate links.