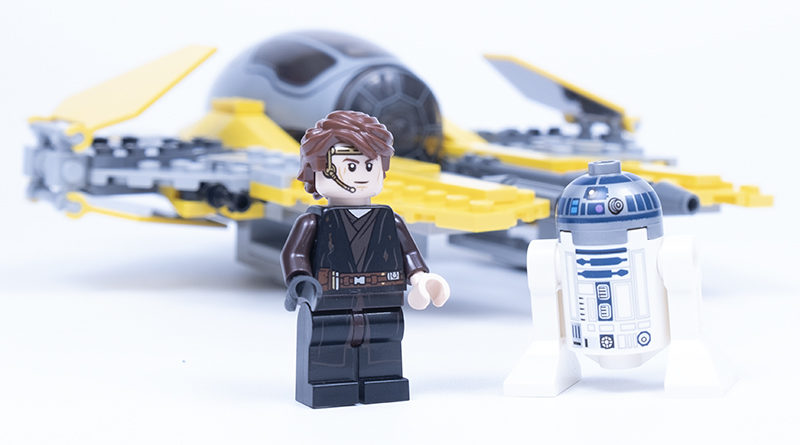 75281 Anakin’s Jedi Interceptor offers a polished version of a ship that has been released many times in the LEGO Star Wars theme, but it doesn’t break any new ground.

Jedi Starfighters are like the X-wings of the prequel era. Offering a one-pilot fighter that zips into thick of battle, they are piloted by Jedi Knights in Attack of the Clones, Revenge of the Sith and The Clone Wars. The Jedi Interceptor is the version that features in Revenge of the Sith, with the yellow one specifically being the fighter that Anakin flies into battle in during the film’s exhilarating opening sequence.

Like X-wings, the LEGO Group seems to want to keep these prominent vehicles in the assortment, with this set following The Clone Wars version released in 2018 – 75214 Anakin’s Jedi Starfighter.

It’s a set built in three sections. The central cockpit uses one large, specialised moulded piece, which mercifully is printed, that mounts onto a constructed section. The hinge to open it up makes flipping the cockpit open nice and smooth, so Skywalker can leap into action.

Either side are two sections that are almost identical but mirrored, which stack plates to create the uniquely shaped Interceptor wings. Lots of angled elements are used to ensure that the sharp edges are captured. On one side there’s a recessed slot of R2-D2 to fit inside, which is covered up on the opposite section.

The Starfighter does not sit high enough off the ground for the wing flaps to be extended much, so fans may want to pop a few transparent elements underneath to remedy that. It’s hard to call it a design flaw, as it is accurate, it’s just a shame it pretty much has to be displayed with the flaps closed.

Considering this set is arriving four years after 75135 Obi-Wan’s Jedi Interceptor, it’s remarkable how faithfully the designers have followed the way that previous set was put together, albeit with minor few changes. In fact, it’s also really close in design to 75038 Jedi Interceptor, the last time Anakin’s version was released in 2014.

The Anakin Skywalker minifigure uses the torso and legs from the version that first appeared in 75269 Duel on Mustafar with the head from 75214 Anakin’s Jedi Starfighter. It makes for a fine minifigure for this set – while the torso probably doesn’t need the battle marks, they don’t do any harm either.

R2-D2 appears in the set, a character who is essential to the set but fans probably have a bucket full of by now.

Given the prices of LEGO Star Wars sets today, £24.99 seems about right. It’s not a bargain, but it doesn’t feel outrageously overpriced either. Were one more minifigure included, it might feel like good value.

It’s an essential ship from the Star Wars saga, but do you need it in your collection? Not if you have any other version of it; there are no particular improvements this time around, the differences to last time are minor. This is a set for those who don’t yet own this particular iteration of the Jedi Starfighter.

75281 Anakin’s Jedi Interceptor is available now at LEGO.com You can help support Brick Fanatics’ work by using our affiliate links.