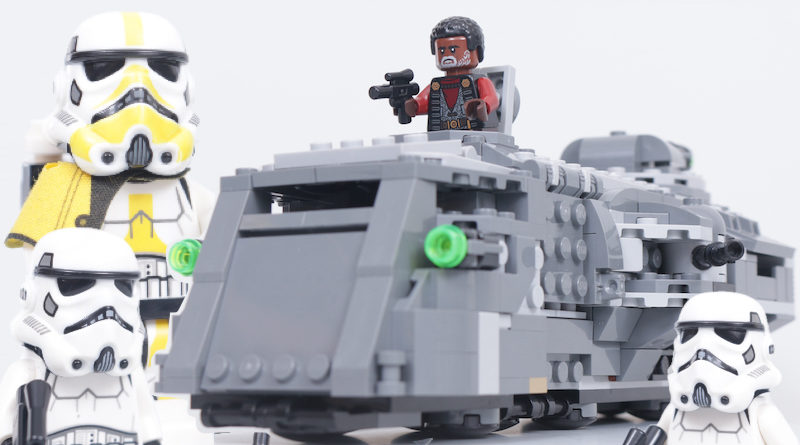 75311 Imperial Armored Marauder is one example of how LEGO Star Wars without battle packs wouldn’t be that bad at all.

Does anybody want to say it? Fine, we will. If the LEGO Group decides to never release another battle pack, we may just be okay with it. Relax: the design team has already confirmed that the four-minifigure-plus-side-model army builders will be returning soon, but the longer they are off shelves and sets like 75311 Imperial Armored Marauder are released, the less they are missed.

Much like 75280 501st Legion Clone Troopers from 2020, 2021’s 75311 Imperial Armored Marauder is a mid-range LEGO Star Wars set offering a fair number of interesting and unique minifigures and a more-than-credible build actually worthy of a LEGO Star Wars collection. These sets may take a little longer to save up for than a battle pack, but they are all around so much better as Star Wars experiences.

And in the specific case of 75311 Imperial Armored Marauder, we may have found an example of the ‘false battle pack’ that is better than last year’s 501st set, too.

75311 Imperial Armored Marauder is based on a Trexler 906 Armored Marauder that appeared in a memorable sequence in the second season of The Mandalorian, in which Greef Karga, Cara Dune and the unnamed Mythrol (the blue guy) are being pursued by a group of Scout Troopers on speeder bikes on Nevarro. This is the vehicle that the trio commandeer in their escape and, at the budget that has been granted to this LEGO set, it’s a surprisingly interesting and intricate build.

Here the LEGO Star Wars design team has created a model full of little twists and turns, and packed with features hidden it to create this wonderful, highly-playable and very collectible LEGO set.

Additionally, the details to enjoy and appreciate here are not just in what the model recreates and captures, but in the level of additional and almost unnecessary detail. This is luxury building in terms of the techniques used and – very much in this set’s case – the choice of parts. Where the designers could have used a 1×1 brick for an interior section just behind the front cabin area, they instead use an inverted slope so that the flow of the interior of the vehicle is maintained and whoever is piloting the vehicle is better framed when sat down.

Likewise, the lower half of the opening side hatch is designed so as to sit perfectly upright rather than require exact placement each time you move it, thanks to a 2×2 plate that didn’t need to be used, and an expert understanding of LEGO piece dimensions that sees two 1×1 inverted brackets in the frame act as buffers to catch and hold two 1×2 inverted brackets on the lower half of the door. Perhaps a few years ago this would have been just a flip-up door built out of a 2×4 panel, and every time you moved it you’d need to finely place it back where you wanted it.

That’s a lot of words to focus on just half a door, but it’s a great example of how careful a LEGO build 75311 Imperial Armored Marauder is, and indeed just how fascinating it is too. It’s all dark grey and light grey so perhaps needs that extra level of engagement, but for the size of the model and the price point it comes in at, it’s also rather unexpected.

What it also means is that, once all put together, this is a set that is packed with little doorways, openings and hatches all the way around, as well as – most satisfyingly – swivelling guns, including the large contraption you build at the rear of the model that connects interior gunner with exterior stud-shooters with effortless expertise.

There’s a great deal to catch the eye on 75311 Imperial Armored Marauder, and so much to fiddle with, open up, store within and all-round interact with. You can buy it for display purposes and almost definitely won’t be able to put it down, and you can buy multiples of it for your Stormtrooper army and still want to build the model each time.

Any complaints, then? Perhaps one compromise is that the Stormtroopers can’t stand up when inside, but that is offset by a fair amount of seating space within – you could realistically find room for five Stormtroopers in there…

There are two minifigure headliners to 75311 Imperial Armored Marauder, and they are Greef Karga and the Artillery Stormtrooper. Beginning with Greef, we have a new, second design of the character from The Mandalorian that reflects his aged appearance in Season 2, complete with grey beard and new outfit. There’s wonderful detail across his entire design, most importantly in that face print that captures his stern expression quite expertly.

Meanwhile, the Artillery Stormtrooper is certainly one way that LEGO Star Wars will get us to accept the most recent design of the Stormtrooper. We still prefer the version of helmet that ran from 2014 to 2018, but releasing colourful variants of the latest, dual-moulded design does warm us to its otherwise brutish proportions. It’s a really fun addition to the LEGO Imperial army many of us continue to amass, with some welcome colour and a different role for the ranks, too.

Beyond the general dislike of their helmets, there’s little to criticise in the opportunity to add three Stormtroopers (one a variant) to the collection thanks to 75311 Imperial Armored Marauder, particularly as they come with moulded blasters rather than the battle pack afflictions that are stud shooters.

We are also much happier with this line-up of minifigures than any that might have included, say, an Imperial pilot of some sort to drive the Marauder. There are plenty of those sitting around in LEGO Star Wars collections already, and you can’t invade planets with an army of those in quite the same way you can with legions of Stormtroopers.

There is one niggle, though – the vehicle from this set appears in a sequence in the second season of The Mandalorian where Greef Karga, Cara Dune and the unnamed Mythrol (again, the blue guy) are being pursued by a group of Scout Troopers on speeder bikes on Nevarro. Meanwhile, the Artillery Stormtrooper and the other Stormtroopers just as memorably appear in a completely separate sequence in a different episode, when they face off against the Mandalorian, Fennec Shand and Boba Fett on Tython.

It’s a minor complaint for what 75311 Imperial Armored Marauder can offer us as a happy compromise – we have already had a Scout Trooper included in a previous Mandalorian LEGO Star Wars set, and there’s little chance the budget for the impressive 75312 Boba Fett’s Starship could have survived including this particular Stormtrooper trio.

75311 Imperial Armored Marauder is best compared with fellow LEGO Star Wars summer 2021 release 75312 Boba Fett’s Starship, when it comes to value and the perception of value. Coming in at 478 pieces, the model that you build appears smaller than initial expectations may have been placed.

However, as in the case of 75312 Boba Fett’s Starship, 75311 Imperial Armored Marauder is not a model that feels light in design, play, display or interactivity. Not a single brick has been wasted, and considering that quantity of bricks and four minifigures comes in at £34.99 / $39.99 / €39.99, 75311 Imperial Armored Marauder is well-priced and more than delivers in value.

75311 Imperial Armored Marauder is a mid-size, grey box built out of LEGO. It shouldn’t be as fascinating as it is to build, nor as fun to play with after, but we have no shame in admitting how great it is, most of all to pack full of Stormtroopers.

Its price may cause some to initially hesitate, but the parts-to-price ratio represents more than fair value, and more important than that is the feeling that no single LEGO piece has been wasted in the design of this set. It’s compact but spacious inside, and it is intricate but with so many features cleverly included.

75311 Imperial Armored Marauder also not only helps to continue the work of 75280 501st Legion Clone Troopers in somewhat filling the gap that has been left by battle packs of late, but it also grants a notable comparison for why if battle packs didn’t return, it would not be the end of the world.

While it made for a charming little build (and one at a higher standard than other battle packs), it also highlights the disparity between battle packs and larger LEGO sets that come in at one of the next price points in the product range.

Battle packs have their place and serve as one of the best entry points into the hobby, but it is sets like 75311 Imperial Armored Marauder that are worth holding hope to see more of in the future. They may come in a little more expensive, but they offer the very best of what that higher level of LEGO Star Wars design can bring, combined with a decent minifigure count.

How long does it take to build LEGO Star Wars 75311 Imperial Armored Marauder?

75311 Imperial Armored Marauder takes around 45 minutes to build, thanks to an intricate and detailed construction process.

How many pieces are in LEGO Star Wars 75311 Imperial Armored Marauder?

There are 478 pieces in 75311 Imperial Armored Marauder, with four minifigures including a new design for Greef Karga, an exclusive Artillery Stormtrooper and two regular Stormtroopers.

75311 Imperial Armored Marauder comes in at 20cm long, 8.5cm tall and 10.5cm wide. It is compact but has seating space for at least five minifigures, which any version of an Imperial Troop Transport needs, really…

How much does LEGO Star Wars 75311 Imperial Armored Marauder cost?