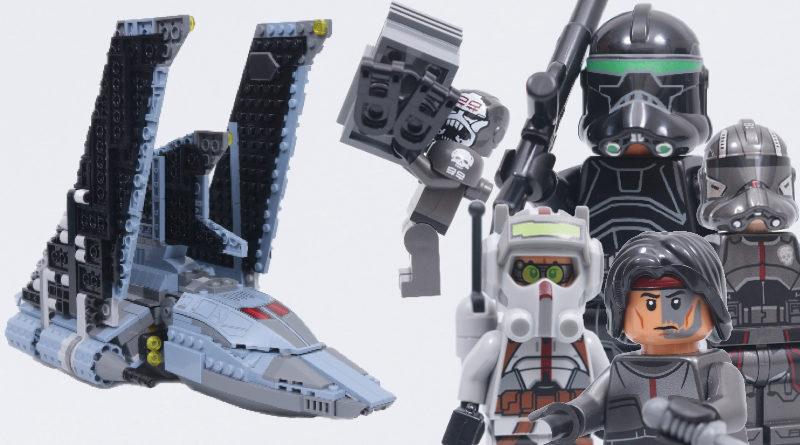 75314 The Bad Batch Attack Shuttle packs all original members of the Bad Batch and their one-of-a-kind ship into a unique, expertly-realised LEGO Star Wars set.

75314 The Bad Batch Attack Shuttle takes almost everything central to the first season of Disney+ series The Bad Batch and perfectly encapsulates it in 969 pieces. From the lead five characters of Clone Force 99 to their Omicron-class attack shuttle named the Havoc Marauder and a couple of bonus side-builds, this is a LEGO set that oozes story, character and collectibility.

The Bad Batch’s Omicron-class attack shuttle, named the Havoc Marauder, continues Star Wars’ recent direction in ship design of taking something familiar to the universe and giving it a new edge in colour and design. Is that colour grey or is it blue? It’s still pretty hard to tell from any number of viewings of The Bad Batch, but in sand blue it makes for a subtle but altogether very different LEGO model sat amongst a lot of grey and white ships otherwise in the LEGO Star Wars roster. Likewise, the ship’s exaggerated, pointy features create a quite unique-looking ship, particularly thanks to that Concorde-esque front cockpit section, and the two large folding wings that slant forward.

A striking design is only half the appeal to the Attack Shuttle, though, given its place as a central hub for the eponymous lead characters from The Bad Batch. In the aftermath of Order 66, the group’s only safe haven is the Havoc Marauder, and throughout the first season of The Bad Batch, it features prominently and centrally to the group’s journey through the galaxy. For that, the LEGO model needs to have an air of familiarity to build and play to it, and that is achieved thanks to smart but understated design.

Understated is the word for what is a cosy interior that seats all four of the mercenary members of the Bad Batch (but with no space for the gonk droid, nor – should you create one – an Omega minifigure). If you want all four sat in the ship and ready for travel, pick wisely for the two you can imagine holding hands in the communal area. The interior otherwise includes a neat folding storage area and a couple of stickers with particular nods to most likely some of the group’s previous missions.

This isn’t a LEGO set that has been over-designed and packed with too many gimmicks and features – much like the show it is central to, the Attack Shuttle is presented simply, accurately and effectively. The construction is very interesting and continues LEGO Star Wars’ underappreciated development of ever-stronger builds – we need to talk less about how swooshable a ship may be and more how droppable it could be. Within that curious and sturdy build is all the detail that the ship needs (there may again be flick-fire missiles, but they are carefully placed out of sight) because it is within that detail that the story and the characters from the show can really sing.

The LEGO Star Wars design team has been smart in choosing the point of focus of design for the lead model in 75314 The Bad Batch Attack Shuttle, delivering most strongly on what the ship looks like and what it does.

Also included are two speeder bikes that appear in two separate episodes of the first season of The Bad Batch. They almost act as additional sets within the wider 75314, both positively and negatively. It adds an extra level of play and value to the set as a whole, but would any of us have complained if we had lost one of the two speeders in exchange for an Omega minifigure, or perhaps also a Clone Trooper in metallic dark grey?

One of the key factors to 75314 The Bad Batch Attack Shuttle’s appeal is in how all five original members of the Bad Batch are included, even if Crosshair comes in his Imperial outfit, rather than his Bad Batch gear.

The design for each of the five in the show is incredibly smart for helping to develop their individual character and story, from Hunter’s shadowy half-and-half facial tattoo and red bandana suggestive of the at-times-questionable decisions he may have been forced to make in combat, to Wrecker’s heavier frame and scarred face suggestive of his propensity to throw himself into the middle of the action.

Tech’s gadgetry is built across his suit and headgear for an on-the-go walking supercomputer, Echo’s trauma of the Clone Wars is etched into his paler skin and cyborg-esque modifications, whilst everything you need to know about Crosshair is captured in that clean and precise tattoo around his right eye.

Each of the Bad Batch members’ history in combat and individual personality as we get to know them in the Disney+ show is mirrored in key design traits to their respective appearances, and importantly, those same key design traits are pretty much all wonderfully captured in LEGO minifigure form here.

There are a couple of compromises to be found, such as Hunter’s bandana having to sit underneath his hairpiece, the size of Tech’s helmet looking out of proportion, and Echo’s missing right hand represented in LEGO form by a light grey hand, but generally the detail across each of the five minifigures is exactly as you would hope for, including across each character’s face prints and their respective helmets.

The only other thing to perhaps point out – bar the brilliantly humorous inclusion of the gonk droid – is the character that is missing, Omega. There are always LEGO Star Wars sets around the corner, though, so we hold hope for what’s to come, as it would also be nice to pick up some Clone Troopers in dark grey/black uniforms too.

Coming in at close to 1,000 pieces with five minifigures, a price tag of £89.99 / $99.99 / €99.99 represents a return to days of better value from the LEGO Star Wars theme. Brick-for-buck base value to one side, 75314 The Bad Batch Attack Shuttle also happens to be a LEGO set packed with story, character, playability and display appeal that altogether just shouts to any LEGO Star Wars fan, and particularly those following The Bad Batch on Disney+.

Looking at the LEGO Group’s recent track record with producing sets based on flagship vehicles from Star Wars series, this may be the only version of Clone Force 99’s shuttle that we see, and quite possibly the only set to contain all five of the original members (even if one isn’t in his Bad Batch gear).

There are so many reasons to ensure this is a LEGO Star Wars set not to miss out on. It’s worth saving up and foregoing some of the other sets you may have your eye on in order to secure this one.

75314 The Bad Batch Attack Shuttle has been designed smartly, with the right balance of focus between style and substance. The Havoc Marauder is skilfully recreated in LEGO form and offers the perfect balance between play, display and practicality, whilst the five minifigures included are nearly flawless in design.

This may be a LEGO Star Wars set that requires a little saving up to buy, but it’s one that offers such value for how masterfully it captures the right balance between story, character, design and play. There’s little to criticise 75314 The Bad Batch Attack Shuttle for – if you are following The Bad Batch on Disney+ or you are after something unique in appearance and character for the LEGO Star Wars collection, this is an unmissable set.

How long does it take to build LEGO Star Wars 75314 The Bad Batch Attack Shuttle?

It takes around an hour and a half to put together 75314 The Bad Batch Attack Shuttle, across seven sets of bags of pieces.

How many pieces are in LEGO Star Wars 75314 The Bad Batch Attack Shuttle?

There are 969 pieces in 75314 The Bad Batch Attack Shuttle, as well as five minifigures that include named characters Hunter, Wrecker, Tech, Echo and Crosshair.

In landing mode, the shuttle from 75314 The Bad Batch Attack Shuttle measures 20cm tall, 25cm long and 13.5cm wide. In flight mode, with the wings set in the correct position, the model measures 36.5cm wide and 28cm tall, but the wings at their very widest – when stretched out flat – come in at 48.5cm wide.

How much does LEGO Star Wars 75314 The Bad Batch Attack Shuttle cost?