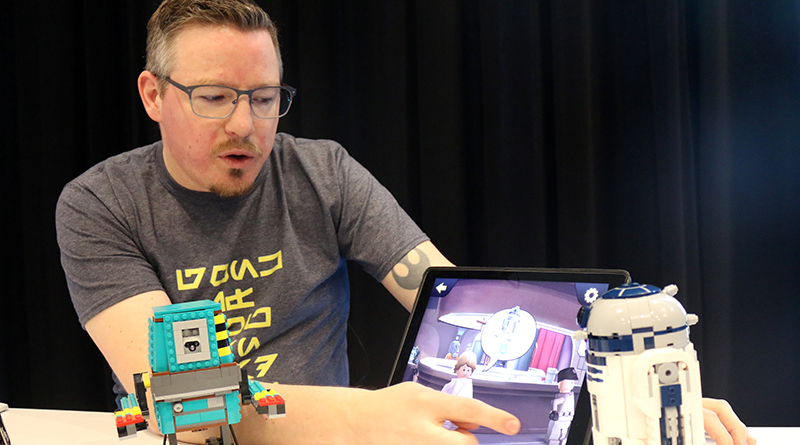 With a trio of functional droids bringing some BOOST action to the LEGO Star Wars theme, Brick Fanatics finds out how 75253 Droid Commander was developed

Designing a static LEGO model is one thing. The designers often talk about ensuring stability, playability and ensuring it also looks beautiful. In the case of LEGO Star Wars BOOST 75253 Droid Commander, each droid must look recognisable while also packing in the functions that will allow the user to code it.

LEGO Senior Experience Designer Steve Geist worked with LEGO Senior Model Designer Carl Merriam to come up with a BOOST set that would do justice to the galaxy far, far away. In this exclusive interview with Brick Fanatics, he explains how the droids were developed.

Did you come up with the functions first or the droids first?

It is a bit of both. Carl and I worked really closely together during the development process to figure it out. We had a few early sketch models where R2 was in a locked tripod position well like so much of his personality comes from being able to transform from tripod to standing position. We knew that was one of the goals, and that drove a lot of the other decisions, like “okay we know we need to do x with these motors so we can move the legs”, it was just a lot of back and forth really.

Like I said, one of the last additions that we actually did was opening up the front of this droid to have that this extra functionality, and it just added so much to the play. It was just a great little find, actually one of the other experience designers on our team decided that we needed that – it was a great little add.

What makes a Star Wars droid such a great toy?

A lot of it that we looked at was the personality and the character. R2 is not just a droid right? He is a, not living, not breathing, but a person, a friend, he has a personality and we want to try and infuse that as much as possible. And that infused some of the coding choices we made, we started looking at ways we can have emotional reactions based off of things and if you encounter a certain character on screen maybe you get scared or maybe you get happy and we tried to infuse those personalities into these guys as well. Obviously they are not as developed as characters but that gave us a lot of opportunity.

Why were Gonk droid and Mouse droid the droids you were looking for?

We locked on them pretty early, we knew we wanted classic Star Wars droids but being able to play up things you weren’t normally seeing in Star Wars toys. That was like looking at the different functions, before Solo came out we saw the Solo Gonk droid from the battle pits and we knew… “you are putting arms on a Gonk droid? we are doing that”. That was just a given.
We wanted to balance being able to play both Rebellion and Empire throughout the experience. And quite honestly, just having a black, a white and a teal droid together is a good visual choice. Lots of different reasons, we explored some other droids but pretty early in the development process these were the ones we decided to go with.

What personality did you determine a Gonk droid would have?

He is obviously a little bit slow, a little bit awkward and that is what we wanted to amp up with the sounds that we made. Obviously his sound library is very full but we got to play with adding some extra sounds to him and to the Mouse droid to help that character.

Was that in conjunction with Lucasfilm? Did they record the sounds?

Yes. Everything goes through them to get approval. They were not involved though, we were doing the actual audio, any new sounds we handled ourselves and the vendor doing some of the app work.