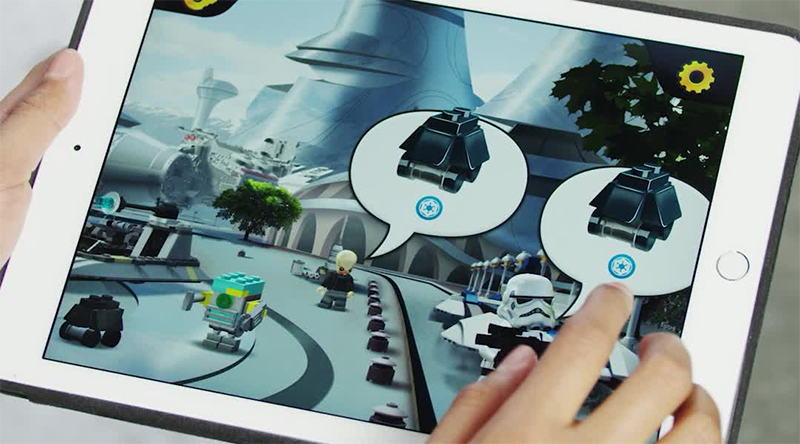 Those who have not yet experienced 75253 Droid Commander might assume that the BOOST app required to operate the three droids is rather functional. While it is functional, it is much more than that.

Taking the user into the LEGO Star Wars world, the player must follow the instructions to build the droids before embarking on missions. Rather than simply make an education coding program, the team behind the product have sought to connect the app and the physical building for a full Star Wars experience.

The app looks like a full video game – how did you come up with this concept?

Star Wars is a gigantic story and we wanted to make the app feel like that. We didn’t want to just do a static menuing system to take us through the different missions, we wanted kids to feel like they were really part of it. This is just the hub, this is the state where kids have started playing but they have just completed building the three droids and they haven’t really gotten through some different missions, so we have an initial meta-story where kids have to find some parts and they get them from Watto to fix the Millennium Falcon so you can actually travel to other planets.

Actually, we’re just missing the last part apparently and you actually get that by talking to different guys and playing through their missions and helping them solve problems. So you would go to Luke Skywalker and say, “hey, Luke has a problem in Beggar’s Canyon so he needs R2’s distance sensor”, this would be one of the missions where kids would go in. We have about 42 or 43 missions total have a little story element like this that gets you into it.

As you keep going you get some information on if you need to swap the hardware, so if I had the hardware in the Mouse I could actually remove it now pretty easily and add it into R2 and when you do that, if the mission has a prop build you get the prop building. After you build the three different droids you have bag 12 remaining, for our prop builds so this is the build and rebuild element we want to keep from BOOST where things like the punching arms are actually props. These would be built onto the Gonk and then removed when you are going onto the next one, he has lots of different arms.

What fun props are there throughout the missions?

One of the hero props for R2 is actually his computer terminal, getting him to talk to a computer is one of the key things. Early on we said we wanted to talk to computers so Carl did this wonderfully ingenious system where he is taking the external motor, driving it up and driving R2’s head rotation with it but he is actually porting it down and now we have a port to extend arms so as R2 is done he can actually use a computer.

Having this extra little motor output was a huge win for the play, it just opens up the possibilities of what we can do and we were super super excited about that. We tried to keep that across the three droids, the Gonk was pretty easy once we were introduced to the Gonk from Solo and they added the arms. W just knew we wanted to play with what arms we could add to the Gonk so we are actually just using the external motors for the walking mechanism and the two internal motors on the hub are for both his different arms.

As we built the Mouse we added a trap door to the top so kids can drop things in there and then the doors open up on both sides so he can drop different elements and have a lot of fun with that. Our last addition in the model development process was actually opening up this cross axle in the front and we have been able to add shooter functionality to the front of the Mouse. The prop bag has one spring shooter in it so all of the different droids have shooter functionality.