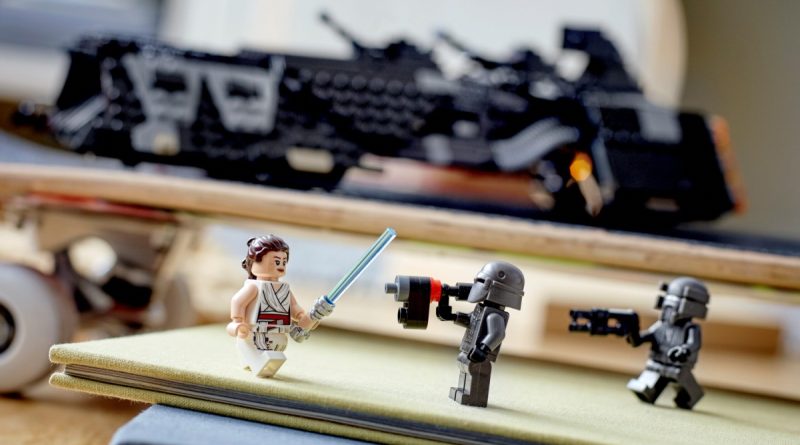 The LEGO Star Wars team says the sequel trilogy is ‘not a closed chapter’, and the theme could still ‘go back and revisit some of it’ – given enough time.

While the LEGO Group went all in on The Force Awakens, The Last Jedi and The Rise of Skywalker when they first arrived in cinemas, things have been relatively quiet on the sequel front since. In fact, just three LEGO Star Wars sets with sequel trilogy characters are still in production, and one of those – 75297 Resistance X-wing – is due to retire by the end of 2022.

With so many other Star Wars properties to draw from, including recent TV shows like Obi-Wan Kenobi and Andor, it’s perhaps not massively surprising that the LEGO Group has mostly sidelined the sequels, particularly given their polarising nature among Star Wars fans. But in celebrating five years of 75192 Millennium Falcon – one of the other two sets to still feature sequel characters – we put the question to LEGO Star Wars Creative Lead Jens Kronvold Frederiksen.

“When we are creating an assortment, we will always have a mix,” Jens tells Brick Fanatics. “A good part of it is always classic models, and it’ll always be like that because it is such a big part of the Star Wars universe. It is of course more challenging when it’s a new movie series, because you never know how much exposure that ship will get, or how important it is. We get insights into the storyline and so on, but things can change. It’s always a little bit of guesswork.

“But with the sequels, I think we have more or less created what we feel are the most important models and characters. You can always add to that, but then it becomes maybe a little bit more niche. So it’s a difficult balance. I’m totally aware of that. Also, we could have more sequel-related models, but what should we have replaced, then? So it’s always that balance that needs to be right.”

At this point, Jens turns the question back on us, asking which sequel trilogy sets we’d like to see. We suggest the throne room scene at the climax of The Rise of Skywalker, in which Rey Palpatine and Ben Solo band together to defeat Emperor Palpatine’s clone. (What a great sentence.)

“That is a cool scene, and that’s also one of the challenges,” Jens explains. “Very often when it’s a new movie, we get a reference on the ships, and we sometimes are so lucky that we can visit the studio and the movie sets. But something like how the scenes play out and the environments and so on, that’s a little bit more challenging. But as you know, we often revisit things and go back, and maybe that scene you’re talking about would be something that we could consider as a cool playset in the future.”

It’s also a question of perspective: when the prequel trilogy originally debuted, it was mostly met with derision by diehard original trilogy fans. But now that the kids who grew up with The Phantom Menace, Attack of the Clones and Revenge of the Sith are adult fans of LEGO in their own right, the LEGO Group has dipped its toes back into those movies with the likes of 75309 Republic Gunship. Jens says it could just be a matter of time before the sequels come full circle, too.

“Over time, it also becomes classic,” he adds. “The same thing has happened with the prequel movies. They are now – for us – considered part of the legacy, and part of the classic universe. So I wouldn’t say that [the sequel trilogy] is a closed chapter for us. Not at all. We could go back and revisit some of it. There are so many cool characters, like Kylo Ren – I love Kylo Ren’s shuttle. It’s an awesome-looking villain ship.”

If you want to get your hands on Kylo Ren through official channels, you’re all out of luck: he hasn’t been in production since the latest version of his ship, 75256 Kylo Ren’s Shuttle, retired in 2021. But you can at least start your sequel trilogy collection (without resorting to the aftermarket) by picking up 75257 Millennium Falcon and 75192 Millennium Falcon, which between them include nods to all three movies. And, erm, two Falcons.