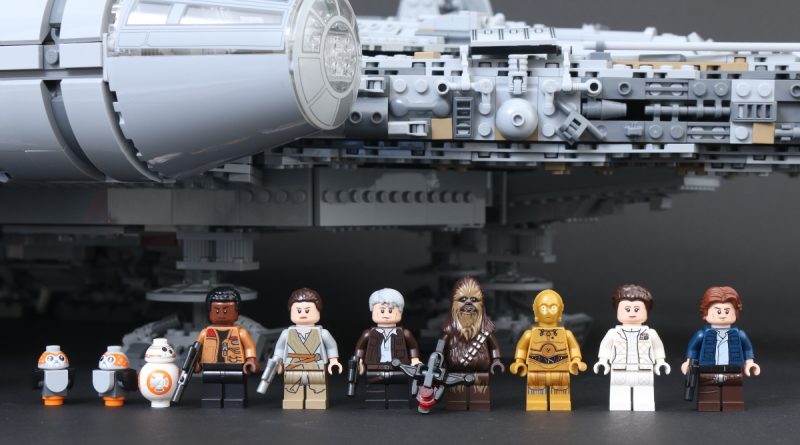 Just two other LEGO Star Wars sets from the sequel films are still in production, 75257 Millennium Falcon and 75297 Resistance X-wing. The former is based on Star Wars: The Rise of Skywalker, while the latter is inspired by Star Wars: The Force Awakens. What’s more, the 4+ X-wing is due to retire before the end of the year, leaving only the Falcons as representation for an entire trilogy Star Wars movies.

The Millennium Falcon is one of the most iconic ships from the Star Wars universe, seen in six out of the nine movies. To do justice to its status in the films, 75192 Millennium Falcon actually straddles two eras from Star Wars, with minifigures of Han, Leia, Chewbacca, and C-3PO forming a team from the original trilogy, and the newer Falcon line-up from Episode VII with older Han Solo, Rey, Finn, and BB-8.

There are also buildable creatures from each era to complete the scenes, including two Porgs from Episodes VIII and IX and a Mynock from Episode V. The range of minifigures and galactic animals means there’s plenty of scope to focus on whatever era of Star Wars you prefer, making 75192 a remarkably versatile set.

As a sequel set, 75192 Millennium Falcon’s focus is on Episode VII The Force Awakens, with Han still around. You can recreate the Star Wars icon’s return to his beloved ship, and the following flight to Takodana.

The presence of the Porgs would also place the Falcon in the time of Episode VIII: The Last Jedi, where the Porgs make their first appearance. To be true to canon, older Han will need to take a step back from your displays as our characters don’t meet the adorable creatures until after his death.

With new shows like Obi-Wan Kenobi, The Book of Boba Fett and The Mandalorian proving wildly popular with fans, it’s no surprise that sets from these more recent shows would push out the sequel sets. However, it’s not just the newcomers that are enduring longer than the sequels.

Sets from the classic original trilogy are also sticking around for longer than many of the sequel sets, perhaps highlighting just how badly many of the sequels went down with large swathes of the Star Wars community.

Even some of the more recent releases, like 75330 Dagobah Jedi Training Diorama and 75334 Obi-Wan Kenobi vs. Darth Vader to name just a couple, show a return to the original trilogy and popular TV shows, rather than pursuing ideas related to the sequels.

Of course, the LEGO Group might also simply be catering to the nostalgia and demand from AFOLs, who would have been children at the time Episodes I to VI came out. Down the line, when time has lessened the blow that many felt Episodes VII to IX had, we might expect to see more LEGO Star Wars sets for the sequel films.