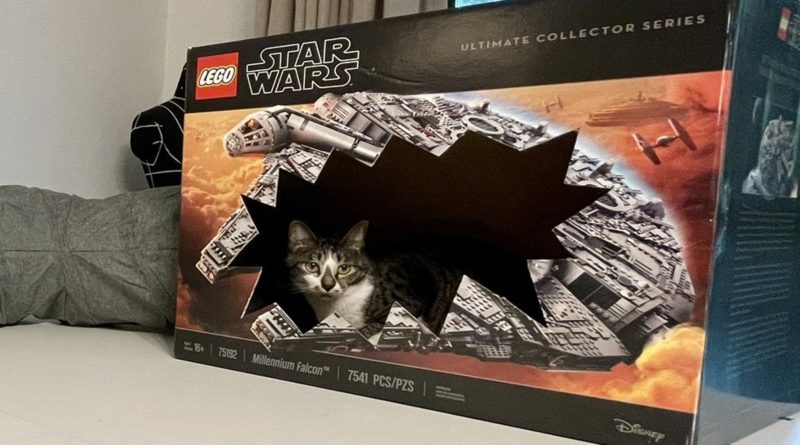 What should you do with the box of LEGO Star Wars 75192 Millennium Falcon once building is done? One solution is to turn it into a feline fortress.

Whilst the models of LEGO Star Wars 75192 Millennium Falcon and 75252 Imperial Star Destroyer are undoubtedly huge (and expensive) on their own, the boxes aren’t exactly small either. Those who own one or both sets may have been wondering what to do with them once the builds are made.

Thankfully, Twitter user Jaime Daza has just the solution you’ve been looking for, should you have a feline companion or two at your side. Their fix to the issue of two huge and empty LEGO boxes is to turn them into a pair of hideaways for their cats.

Through the use of some catnip and a duo of themed holes, the two animals seem pleased with their new homes and there’s plenty of space inside of them to stretch too.

LEGO designer Samuel Johnson shared the creative reuse of packing on his Twitter account, asking what else can be done to help use, store or dispose of empty boxes.

LEGO Star Wars 75192 Millennium Falcon and 75252 Imperial Star Destroyer are available now from the official online store, with the former being one of the biggest models of all time. Should be looking for a model like no other as noted in our review, as well as a new home for your feline friend, then the massive Star Wars UCS Millennium Falcon could be for you.