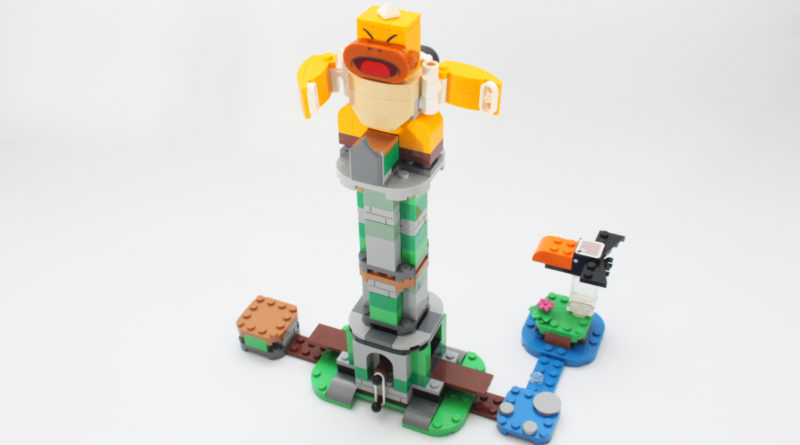 The LEGO Group and Nintendo’s fruitful partnership has already seen several of the Super Mario franchise’s iconic bosses recreated in bricks, across a wide variety of price points. The 2021 summer range of expansions brings Mario and Luigi another huge foe to face with a particularly destructive showdown against the Sumo Bro.

With two new characters for the theme and a towering build to construct, 71388 Boss Sumo Bro Topple Tower positions itself as one of the tallest models in the summer wave – but not much else.

There’s not much to the build beyond what you can see on the box art, with just a few modules to expand your creations and one larger obstacle to complete. However, the amount of customisation that 71388 Boss Sumo Bro Topple Tower encourages in its one function is comparable to that of the larger models within the Super Mario product line.

The main feature of the set is the titular topple tower itself, with a base build containing all the mechanics and holding a total of three sizable pillar pieces. While the official images suggest setting one of these aside as another level area for the aptly-named tower biome, creating an even taller fortress to topple makes for a satisfying conclusion to the Sumo Bro boss battle.

For those wondering how the topple tower functions, a four-stud lever brick is flipped side to side depending on which area of the spire you push down on with your plumber of choice. Some rapid movements on one or both sides will force the build to crumble, knocking the Sumo Bro off of his perch and ready to be taken down for the plentiful coin reward.

The treasure awaiting at the top of the topple tower consists of a single Super Star block, granting brief but powerful invincibility to either Mario or Luigi, and providing a speedier takedown of the Sumo Bro if grabbed before the boss battle’s end.

Choosing not to spread the pillar models throughout the set won’t leave your level without any ground to stand on though, as a small surface of water and grass sits nearby as the home of the build’s only other enemy, the Crowber. This segment is really no different to what you’ll find in most of the Super Mario sets from the earlier waves, but suffices in expanding the level an adequate amount.

A total of two brick-built characters are included in 71388 Boss Sumo Bro Topple Tower, with the eponymous bro being the largest of the duo. The figure boasts a limited amount of movement, with the arms wildly beating his chest as the spire begins to crumble (or maybe he’s just gearing up for a very aggressive hug).

This stocky character is represented just fine with bricks, with the wide stance and bulky frame lending themselves well to the thick look of the chosen LEGO elements. The printed pieces used to capture Sumo Bro’s facial expressions are oddly adorable too, creating a surprisingly appreciated contrast for the intimidating boss character.

The Crowber is a familiar character who also appears in 71394 Character Packs – Series 3. This simple build stands out from the rest of the set thanks to its monochromatic nature, with the orange beak naturally attracting the player’s gaze too. Since the Crowber can also be found in the latest blind-bag series, it’s clearly not the main attraction, but having more fodder to throw against LEGO Mario and Luigi is never a bad thing.

With only one obstacle and relatively few builds (not accounting for the size of them), 71388 Boss Sumo Bro Topple Tower seems to offer less value than other Super Mario expansions at the same price of £24.99 / $29.99 / €29.99. Specifically, 71367 Mario’s House & Yoshi featured two distinct level models and a similar pair of enemies for the same cost.

In that respect, the Sumo Bro’s boss battle shouldn’t be one of your highest priorities among the Super Mario theme, but its only feature is particularly enjoyable and brings a kinetic touch to any level. While not a build to mark as a must in the Super Mario theme, anyone wanting to add a quick boss battle to their Super Mario collection – and one that lends itself even better to multiplayer – will find exactly what they need for a decent price here.

71388 Boss Sumo Bro Topple Tower serves as a fine introduction to LEGO Super Mario’s new multiplayer mode, but one that is not immediately clear of its intention. In reality, the topple tower can be very easily operated with just one Super Mario brother, though at the potential cost of chaotic fun.

Anyone desperate for the brick-built interpretation of the Sumo Bro will be pleased with the resulting model in this set, but those looking for a little more bang for their buck will likely be disappointed once they have toppled their first tower. Even with the customisable options on offer, the play features of 71388 Boss Sumo Bro Topple Tower have too little to offer compared to similarly-priced models in the theme, though do provide a desirable gameplay element in the form of the Super Star block.

While 71388 Boss Sumo Bro Topple Tower doesn’t especially lack in any one area, it also doesn’t excel when placed next to the rest of the Super Mario theme, and your money might be better spent elsewhere – unless you happen to be the biggest fan of the Sumo Bro, that is.

71388 Boss Sumo Bro Topple Tower should only take you around 25 minutes to construct, using instructions only available in the accompanying app.

How many pieces are in LEGO Super Mario 71388 Boss Sumo Bro Topple Tower?

A grand total of 231 pieces are waiting for you in 71388 Boss Sumo Bro Topple Tower, a few of which are printed with unique facial expressions and more.