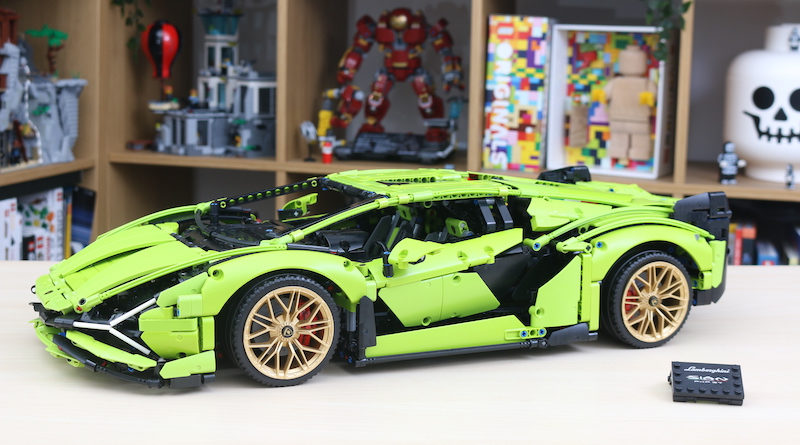 Announced at the end of May and released on June 1, 42115 Lamborghini Sián FKP 37 is the latest Technic Ultimate supercar from the LEGO Group, based on Lamborghini’s first hybrid vehicle ever produced that was announced in September 2019, will see only 63 units produced and is named after the Italian Bolognese dialect Sián, meaning a flash of lightning.

Eye-catching, distinctive and peculiarly angled, how does this supercar translate into Technic form? Well, from the price paid to the embossed finish of some unique packaging, through to an engrossing, complex yet intuitive design, 42115 Lamborghini Sián FKP 37 is a true moment of LEGO luxury, both in experience and product.

Indicative of what’s to come, where most of the time we’d set straight to talking about the set, 42115 is a little different, in that we need to acknowledge the packaging. The outer box curiously places the product image on the back, in favour of a bright green front that mimics a Lamborghini bonnet. Likewise, that tribute is carried inside, where you are presented with six boxes set out akin to a Lamborghini engine cover.

Those six boxes act not only as smart presentation for the unassembled pieces inside, but also as markers for what is a six-stage build (more accurately five stages plus the wheels). This will all feel unique yet still slightly familiar for some. Indeed, from that early presentation through to the compartmentalised way that construction of the model is set up, there’s a lot that the design team have actually simply mirrored in process and approach from the previous editions to Technic’s Ultimate supercar range –  2016’s 42057 Porsche 911 GT3 RS and 2018’s 42083 Bugatti Chiron.

That is even carried through into the first half of the build too, as LEGO Senior Model Designer Aurelien Rouffiange has reflected in conversation with Brick Fanatics and fellow Recognised LEGO Fan Media at May’s digital Fan Media Days event. The Bugatti Chiron advanced inner model design by bringing in new gearing elements and a new gearing mechanism, and 42115 Lamborghini Sián FKP 37 merely refines use of that in an internal and chassis construct that in many stages will feel very similar. It’s complicated and full of opportunity to go wrong, but also incredibly clever and smart, in setting up across such a small surface area a tremendous amount of functional movement and working parts.

Where is the build different then? Most notably in trying to minimise the potential for such error in those opening stages, through compartmentalising construction of the very complex gearing into its own Technic frame. Literally boxing everything inside it, this has the effect of creating a clearer presentation to the most complex and precise part to the model, keeping it accessible on display even as you build up the rest of the car around it.

Another notable change is in the suspension, where in changing the angle of the suspension springs, the vehicle’s weight is far better supported than in comparison with the Bugatti’s suspension that could not hold its model’s weight.

These are advances primarily brought about through improved design, rather than in new pieces, which is at once credit to the LEGO Technic team behind this model and advantageous in opening up where new pieces can instead be introduced.

And that’s across the exterior of the model. Indeed, it is more than apparent that alongside new pieces, a lot of focus and ideas have gone into capturing the shaping of the Sián in LEGO Technic form. As a real world vehicle, the Sián borrows heavily from Lamborghini’s history both recent and classic, featuring aspects such as the overall ‘wedge’ shape and exterior lighting made famous by Marcello Gandini’s original design best captured in the Countach, combined with advances (like the front lights) made in the far more recent Terzo Millennio, an electric concept car the result of a £100m partnership with Massachusetts Institute of Technology (MIT).

Every unique twist and turn in the outer framework of the Sián is hyper-stylised in design, but crucially with function still at its heart, to more than just complement the V12 hybrid engine inside. The rear wing is shaped as such to maximise downforce, as is the large carbon fibre front splitter (at the underside of the front of the vehicle) and the car’s long, curving doors that lead to large side air intakes. The Sián includes definition and innovation across its body, from aspects such as the iconic shape of the hood, the glass roof for improved light and visibility and the curvature running along the sides and over the wheel arches.

And where 42115 Lamborghini Sián FKP 37 shines best is in capturing every single one of these details within a complicated and truly original build. It is very clear that there are certain areas that have endured particular focus from the LEGO design team – on request from Lamborghini – so as to capture them as precisely as possible.

The unique Y-shaped lights at the front are a prime example of this, where what looks like a relatively simplistic solution of three white bars meeting together against a black backdrop is achieved in the exact same angle as the real vehicle only thanks to a remarkably detailed and twisting mini-build.

Likewise, the undulations of the rear wing, the unusual bodywork that frames the rear lights and exhausts, the ever-so-subtle upward angle that the front splitter along the underside of the front sits at – coupled with the sloping winglets between it and the headlights – are all design details reflective of the extra mile the LEGO Group has gone to with 42115.

In many ways, a hyper-stylised car has bred hyper-design from the LEGO Group, as the almost ridiculous shape and nature of the Lamborghini is wonderfully – and you can imagine from the LEGO design team’s perspective, difficultly – translated into Technic.

The model isn’t just peppered with such instances of hyper-design, but absolutely plastered in them, for a final model that will sit before you oozing that same unique combination of luxury and style otherwise only identifiable in the Lamborghini brand.

And that’s important to note. For offering a substantial piece count, luxurious packaging, a once more fantastic insight into the design process (those instruction booklets include QR codes for a series of additional video content) and an engrossing, attention-demanding build, 42115 Lamborghini Sián FKP 37 shines brighter for something else entirely.

It is a LEGO Technic set that captures not just various features and details of the real world supercar that it is based on, but also the unique expression and identity of this vehicle and its brand. It’s the closest most of us will come to owning a Lamborghini, and it doesn’t fall short in the feeling and experience that it delivers.

42115 Lamborghini Sián FKP 37 will demand a hefty budget and a lot of prime LEGO real estate once built, but for everything that it offers, it’s a set not to miss.

Lamborghini are only producing 63 Lamborghini Sián FKP 37s and they have all already sold. Whilst the LEGO Group are producing a few more copies of their version, they won’t hang around forever, so make sure to not miss out before it is gone in a flash of lightning.

Keep track of its stock levels and popularity with Brick Fanatics’ Top 20 LEGO Sets List. A standout release from the LEGO Group in 2020, 42115 Lamborghini Sián FKP 37 more than justifies its place on our list of the 20 best sets currently available to order at LEGO.com.

Meanwhile, have a read of five things we couldn’t fit into this review but that also caught our eye about 42115 Lamborghini Sián FKP 37.

42115 Lamborghini Sián FKP 37 was provided for review by the LEGO Group.

Support the work that we do at Brick Fanatics by purchasing your LEGO via the affiliate links on our site, such as this one.