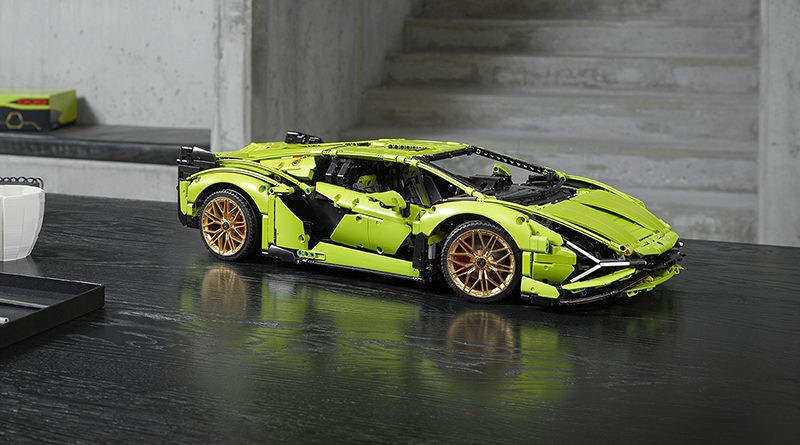 The LEGO Group made a rather big announcement during LEGO Fan Media Days 2020. The company unveiled the latest model in the LEGO Technic supercar series, sharing 42115 Lamborghini Sián FKP 37 with the world for the first time ahead of its launch on June 1.

Following the big reveal, LEGO Senior Model Designer Aurelien Rouffiange, who helped to develop the model, gave a walkthrough of the set and answered questions in a remote roundtable session.

Brick Fanatics kicked off the questions by asking Aurelien about the most important aspects of the real car to capture in the LEGO model.

“So I would say the style of the car, the shaping,” he explained. “It’s a combination of organic curves and very sharp edges, very true to the Lamborghini DNA and very unique. When we visited the Lamborghini studio –almost two years ago now – it was quite impressive, they had nothing yet physical but they had 3D renderings and some small sketches. We could see there was something very, very nice to work with and challenging for us because the shapes were something we hadn’t seen before in the Lamborghini design language.

“For us also it was a challenge because it was something that we haven’t been challenged with yet and we always want to push the limitation of what we can do with LEGO bricks. Obviously you can see we had to create some new elements to make this happen the right way.

“The front with the hexagon lights, that was quite challenging, and very important to them. The front, the door, some of the rear were the three main aspects.

“There was also a very important part on the roof because that is not just flat, it also has a curve inside, it is a bit lower there, so that was very important for them to keep and to have represented on the LEGO model.”

Those new elements are absolutely key to the model capturing the shape of the real life design marvel. Focusing on those, rather than interior elements, was a conscious decision. “This year we decided to develop shaping elements as a priority, because we already have developed a lot on the gearing mechanism and gearbox elements in the Bugatti Chiron. And for this one, because it’s a very sophisticated shape and design, we thought it would be better to put the focus on the elements that go into shaping.”

As ever, the wheel rim is one the most iconic new pieces designed for the set. “There is always the rim that is created to represent the rim from the brand. This was made thanks to Lamborghini sending us some 3D files of the official rim, the one they told us they would use for the reveal of the car.” From that, an Element Designer came up with the LEGO version.

He also revealed that replicating the doors was a difficult aspect of the design process: “You have the mechanical part of the door, you can make it but then to have it functioning and keeping the same look, having have it open and close so it doesn’t interfere with the rest of the build –t hat was also quite challenging.

It took around 18 months of work from the initial conversations to get to the finished, boxed product. “One year of pure development time, one year from the first brick to when you have it today ready, in the box, everything printed and all ready,” Aurelien confirmed. “The first time we were there I think was around December 2018. That was the first time we thought it could be the right candidate for the next ultimate, getting them to invite us to visit and see what they could offer for the next ultimate car.”

Those who have already managed to get their hands on the desirable set will have noticed that, like previous Technic ultimate cars, the actual assembly process is replicated. “It is the same ideas we introduced in the series of the Ultimates, with the Porsche and with the Bugatti… the Lamborghini follows the same process, so each box will be different steps and different parts of the assembly process of the Lamborghini in the factories.”