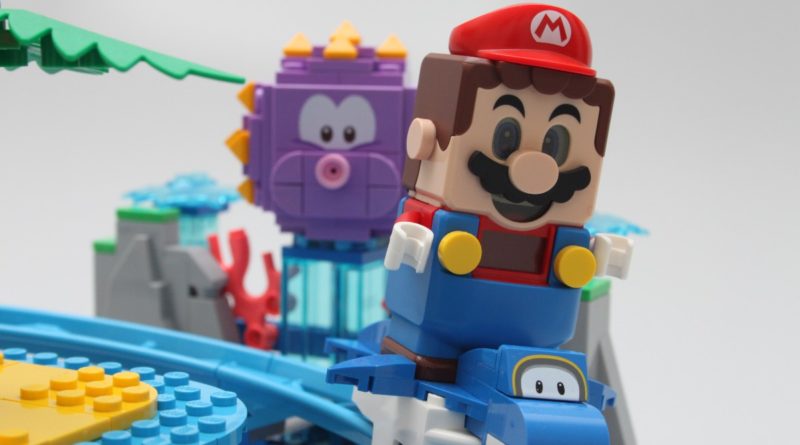 71400 Big Urchin Beach Ride brings together the beach biome in an especially kinetic LEGO Super Mario set that is wonderfully simple to play with.

LEGO Super Mario’s beach collection of models might not have been released in summer, but 71400 Big Urchin Beach Ride still manages to bring the thrills with a feature-focused package.

Whether you’ve been pining for a LEGO Super Mario roller coaster or are just hoping to collect every brick-built Yoshi, 71400 Big Urchin Beach Ride is one model not to overlook in 2022.

The main model in 71400 Big Urchin Beach Ride is a huge creation of a cliff face and a circular loop of roller coaster track for a dolphin to swim and jump around in. The aim here is to have Mario ride on the dolphin and hit the Big Urchin that sits atop the rocks, with water splashing up as you spin around. Hit the enemy hard enough and they’ll be knocked off their perch and you can earn some coins, as well as a Super Star.

This build is massive and suitably fun to use, with Mario able to reach some serious speed without falling off the dolphin, though the risk is still there. Compared to other Super Mario sets, the multi-layered kinetic energy this feature provides is nearly worth the asking price on its own, though isn’t the only function to find in 71400 Big Urchin Beach Ride.

On his way to explore the beach, Mario and Luigi will need to cross a wooden bridge guarded by two leaping Cheep Cheeps. Stepping on the first two planks won’t pose an issue for the plumbers as the fish remain still. However, placing the figures on the middle section will make the Cheep Cheeps ferociously jump past Mario or Luigi as many times as you wish, ready for coins to be earned by stepping on their backs.

This is another fun play feature that adds to the movement of the model, and makes the set especially useful for multiplayer with two sizeable builds each dedicated to a single, visually-impressive feature.

The modules don’t stop there, as the usual assortment of extra course elements and plates are included to fill the space between the headline builds. These elements are thematic and plentiful, though they are by no means the main attraction of 71400 Big Urchin Beach Ride.

The diving board, on the other hand, is a stand-out inclusion of the largest seaside model of LEGO Super Mario so far, with every aspect of the build and the gameplay it provides being well thought out. Bouncing Mario off the wooden board will play an appropriate noise from the figure, and while multiple bounces aren’t necessary, you might find it hard to resist before splashing down into the water below.

Each of the features lends itself to the beach setting of 71400 Big Urchin Beach Ride while being unlike anything we’ve seen in LEGO Super Mario before, or at least to this level. The dolphin loop is also an impressive model that could easily be a boss fight at the end of your latest course.

Three exclusive characters are included in 71400 Big Urchin Beach Ride alongside the two Cheep Cheeps, which are appreciated but not notable enough to mention any further.

The first of these is a Yellow Yoshi, acting as another ally for Mario to ride into battle. Getting another colour of Yoshi is no bad thing, but seeing another character from LEGO Super Mario such as Toad or someone more obscure like Toadsworth from Super Mario Sunshine would have been a welcome surprise too.

The Big Urchin is a notable enemy in the set and has an intimidating presence that greatly resembles its appearance in the games. While the figure is ultimately static without the dolphin loop module, its unique and brightly-coloured look helps it to stand out from other brick-built Super Mario enemies, and it fits in well with the waterside location.

This LEGO Super Mario set costs £54.99 / $59.99 / €59.99, and with the combined value of the huge dolphin module, the wooden bridge, the diving board and the cast of characters and additional platforms, it feels worth every penny.

With plenty of options for expanding your courses with a climactic and kinetic beach battle and a surprisingly displayable build to pose your figures ready for a day on the sand, 71400 Big Urchin Beach Ride is a worthwhile addition to your next order and one of the most memorable and fun LEGO Super Mario expansions to date.

71400 Big Urchin Beach Ride proves that a day at the beach can be just as thrilling as it is fun. Although Mario and Luigi are never able to take a day off to relax, this seaside holiday provides plenty of entertainment for players with unique modules that offer layers of movement and enjoyment.

When stacked next to other, larger Super Mario sets such as the now-retired 71369 Bowser’s Castle Boss Battle, this set offers similarly engaging features for a fraction of the price.

Whether you’re looking to set up a beachfront area of your LEGO Super Mario world or need an exciting finish to that near-perfect level you’ve been building, 71400 Big Urchin Beach Ride is almost certain to impress.

From start to finish, 71400 Big Urchin Beach Ride will take around an hour to build, not including the time it takes to start up the LEGO Super Mario app, which is needed for construction.

How many pieces are in LEGO Super Mario 71400 Big Urchin Beach Ride?

536 pieces are included in 71400 Big Urchin Beach Ride, comprising two major modules and a host of other parts to use in LEGO Super Mario courses.

In the suggested layout, 71400 Big Urchin Beach Ride measures 12cm high, 49cm wide and 47cm deep, though it can be mixed and matched to fit in a variety of spaces.