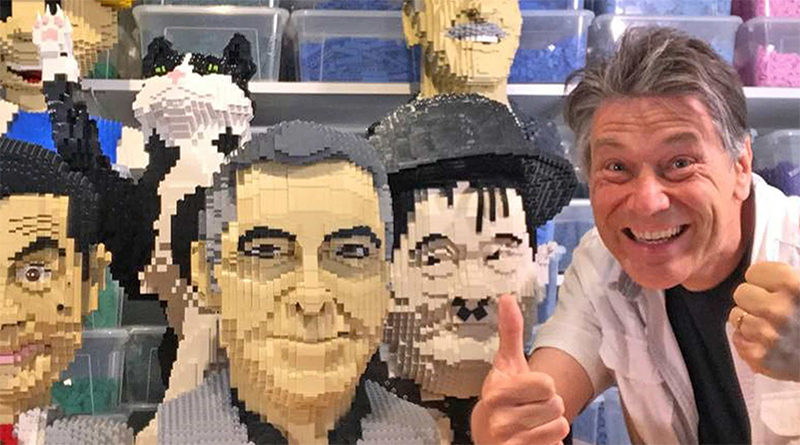 Builder extraordinaire Dirk Denoyelle shares the story of how he went from a stand up comic to a LEGO Certified Professional.

Dirk Denoyelle is one of a handful of individuals worldwide who is a professional LEGO builder with the company’s stamp of approval. He has shared his inspirational story about how he developed a brick business and became a LEGO Certified Professional (LCP).

“When I approached LEGO Belgium sometime in 1999, I was a pretty well known comedian and voice actor in Belgium. I was looking for a K8 full of light grey bricks to build the head of local singer and sculptor Willem Vermandere, to be used in my next comedy show. Much to my surprise, LEGO agreed to give me the bricks. They literally said, ‘we get a hundred requests a year, and we grant one. This year, we’ll do yours’. So I was very, very lucky,” Dirk explains.

The LEGO head became a prop in his shows and a decade later he had a conversation with LEGO Community Engagement representative Jan Beyer. It was at that point that he became of the LEGO Certified Professional scheme and submitted a successful application. Building LEGO models would now be a second career for Dirk.

“I founded Amazings – actually named after my wife Amaya, making Amazings stand for ‘Amaya’s things’ – and started doing whatever project that crossed my path. The original idea was to focus on building heads and mosaics, but it soon became clear the market was not ready for that.”

With customers not ready to cover the cost of mosaics and busts, Amazings pivoted to whatever the market wanted.  “A scale model of a machine for a trade fair. Some give-aways for a product launch where I was also the Master of Ceremony. A scale model of the towers of Ghent. The occasional piece of art…  nd then I was asked by an agency in Bratislava, Slovakia if they can put my work on display in a shopping mall? Of course they can!”

The company has grown from Dirk’s home to a three storey building. “Today Amazings can look back on hundreds of projects for a wide variety of clients, be it a local farmer or a Norwegian billionaire, a small enterprise in Brussels or the Hilton Opera Hotel in Paris.

“I also am a certified LEGO Serious Play coach and have done team buildings with the bricks in Europe, the US and Asia. And yes, I still performs as a comedian and motivational speaker – once a comedian, always a comedian!”