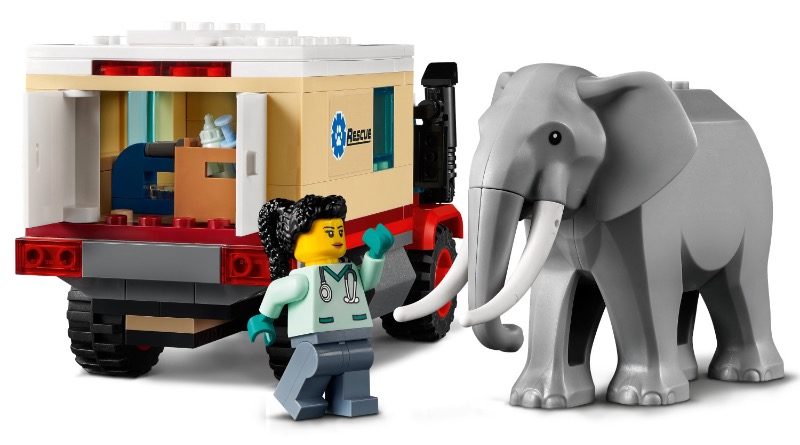 More images of this summer’s LEGO CITY sets have landed online, giving us a closer look at their brand new elephants, lions and monkeys.

Promobricks reports that online retailer Terminal Video Italia has published higher-resolution images of both 60307 Animal Rescue Camp – the largest Savannah-themed set in the summer wave – and the currently-unnamed 60308, which brings together the fire and police subthemes in a single set.

60307 Animal Rescue Camp includes the same adult elephant found in the smaller 60302, only with larger tusk elements, along with an eagle, two new monkeys, and a family of lions. There’s also a smattering of land, sea and air vehicles for the six minifigures to drive or pilot, and some terrain to emulate the African Savannah setting.

Beyond the usual fare, though, those eight animals in a single box – seven of which use brand new elements – should make 60207 Animal Rescue Camp a very tempting prospect for LEGO fans of all ages when it launches this summer.

The other set revealed in hi-res by Terminal Video Italia will likely have less universal appeal, however, given it skewers several very familiar staples of the LEGO CITY theme: a police station, a helicopter, two boats, a lighthouse and a criminal making off with stolen loot.

Promobricks reports that 60307 Animal Rescue Camp will launch in July, while 60308 will arrive in August. We’ll bring you confirmation on those release dates as soon as we can. In the meantime, click here to check out the rest of this summer’s LEGO CITY sets.