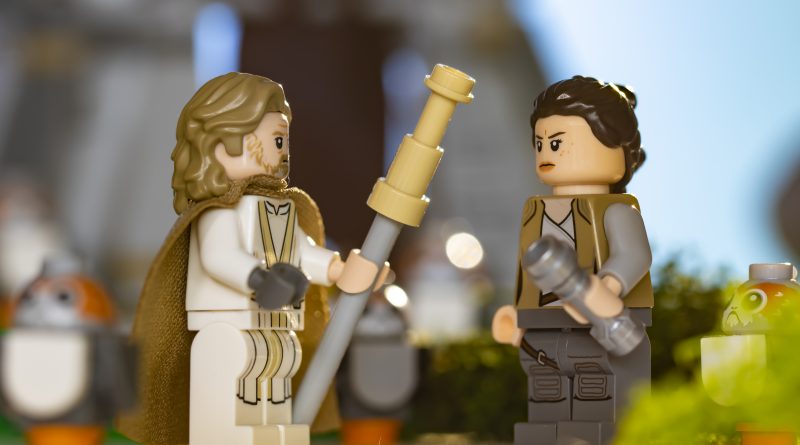 Having been asked to provide the photography to accompany the Brick Fanatics Magazine Issue 12 Star Wars special feature, I knew I would have my work cut out to recreate the diverse and iconic locations from the sequel trilogy films.

Having already successfully created a brick sized version of Crait in my studio the next stop on my LEGO Star Wars tour of the galaxy would be the remote, rocky island of Ahch-To – the isolated isle that Luke Skywalker had made home in Star Wars: The Last Jedi.

I decided to incorporate 75200 Ahch-To Island Training set with some real world objects to really help create the feel and look of Ahch-To.

Real rocks from my local beach (a favourite prop of mine) and modelling foliage of various greens not only looked like the island but also complimented the colours of the LEGO set perfectly. As a side note, I have tried using real foliage before, but it tends to go mouldy very quickly and attracts a lot of unwanted creepy crawlies – they are not the ideal guests for a photoshoot.

For the rest of the scenery I used some aquarium decorations, once again choosing colours to compliment my marine scene. They have a slight advantage over real rocks as they are made of plastic and are much easier to position around a set. The larger piece works well adding both scale and depth to the background of shots.

Ahch-To is an island surrounded by choppy waters, in order to create this look I wrapped cling film around dark blue card. I then randomly pinched bits of it up to try to mimic the look of a rolling ocean. To further enhance the look, trans-clear white and blue LEGO studs were scattered about – light reflects nicely off the LEGO elements, giving the impression of breaking waves.

Finally a whole flock, gaggle or herd (I am not sure of the correct collective noun) of Porgs were placed around the scene to both bring life to the shots as well as accurately reflect the scenes from the film. They add instant adorability to every shot they feature in.

For additional cuteness, I also shot the larger LEGO set, 75230 Porg, in the same setup.