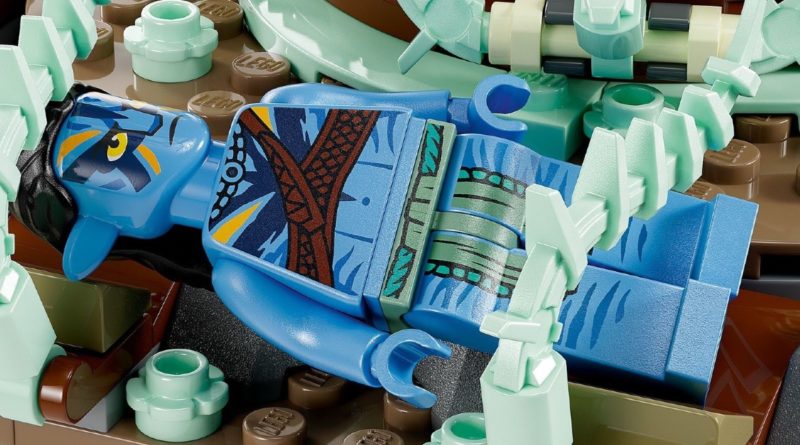 Long LEGO minifigure legs are making a comeback in this year’s Avatar sets, so here are six ways the LEGO Group could put them to use across the rest of its portfolio.

For more than a decade, the only way LEGO minifigures have been able to communicate a difference in stature is through short or – as of 2018 – mid-sized legs. But what of those extremely tall characters that pop up now and again throughout the LEGO Group’s licensed themes? Won’t somebody please think of the vertically-gifted?

Some themes – like Harry Potter – have found ways around the restrictions of standard minifigure legs, with dedicated minifigure moulds (Hagrid) or longer dress pieces (Madame Maxime). But beyond those sporadic examples, every other theme is left with characters that are effectively squashed into the same template – even while they deserve longer legs.

Now that 75574 Toruk Makto & Tree of Souls is spearheading the return of Toy Story’s elongated minifigure legs, though, it’s high time Star Wars, Marvel and more embraced the opportunities afforded by extending up, as well as crunching down. Here are just six examples of where that could be beneficial…

The LEGO Star Wars team has already expressed a resistance to increasing the height of its Darth Vader minifigure, pointing to the current design’s charm and LEGO DNA, but there’s nothing to say that couldn’t change in future. Now that the LEGO Group has effectively perfected the Sith Lord’s minifigure design in almost every other department – from his two-piece helmet to his printed arms – the only direction left to go in is… up.

Darth Vader’s towering stature is a key ingredient in making the character an imposing villain on-screen, and it would be great to see that finally reflected in minifigure form.

Most droids (and droid-alike characters) in the LEGO Star Wars universe are depicted with unique, spindly legs – compared to classic minifigure elements – which is why you won’t find the likes of K-2SO or General Grievous on this list. But The Mandalorian’s bulky Dark Troopers are designed in a more traditional format, and that makes them prime for using longer legs.

Redesigning them at this stage (with 75324 Dark Trooper Attack still on shelves) is probably out of the question, and a future makeover would probably also disrupt the armies fans are currently amassing. But it’s definitely worth exploring a few years down the line – especially if Dark Troopers have any presence in future Star Wars material.

One of the most iconic stills from the very first Guardians of the Galaxy movie is of the five main characters – Star-Lord, Gamora, Drax, Rocket Raccoon and Groot – in a criminal line-up, which very conveniently demonstrates just how much they differ in height. Or, more specifically, just how tall Groot is compared to the rest of them.

How tall? Well, his official height varies, and the fact he can grow his limbs at will doesn’t exactly help. But as depicted in Guardians of the Galaxy Vol. 1, Groot is very clearly significantly taller than the rest of the gang, and his LEGO minifigure deserves long legs to reflect that – especially if he reaches that size again in Vol. 3.

If any character has missed the mark right out of the gate with the absence of long minifigure legs, it’s NED-B. Debuting in this summer’s 75334 Obi-Wan Kenobi vs. Darth Vader, the mute droid is visibly taller than every other character in the Disney+ Obi-Wan Kenobi series (and not just little Leia). That makes its LEGO minifigure look a little comical with standard minifigure legs – a glaring omission given the imminent return of long limbs.

Of course, the timing of this release suggests a NED-B minifigure with long legs was never on the cards, and given how comparatively obscure this character is, we probably won’t see an updated version any time soon.

While the rest of the minifigures on this list all currently exist in the LEGO line-up, and would simply benefit from a quick update with longer minifigure legs, the return of that element for the Na’vi also opens the doors to brand new characters. Say – for instance – Mr. Fantastic, who would surely be best portrayed as a LEGO minifigure in his stretchiest form.

The arm elements required already exist (see Mrs. Incredible and Ms. Marvel), and combining them with the longer legs seems like the perfect starting point for a Mr. Fantastic minifigure. And now Reed Richards is part of the Marvel Cinematic Universe, it’s surely only a matter of time before it happens…

Take a look at any Star Wars character height chart, and Chewbacca pretty much always comes out on top. The formidable Wookiee warrior stands more than seven feet tall, which places him head and shoulders (and fur) above Han Solo, Luke Skywalker, Princess Leia and even Darth Vader.

And while the longer minifigure legs can risk marring the proportions of regular humans when used with the standard minifigure torso, Chewie’s unique head and torso element should go some way to offsetting that. If there’s any one minifigure that deserves long limbs, it’s Chewbacca.