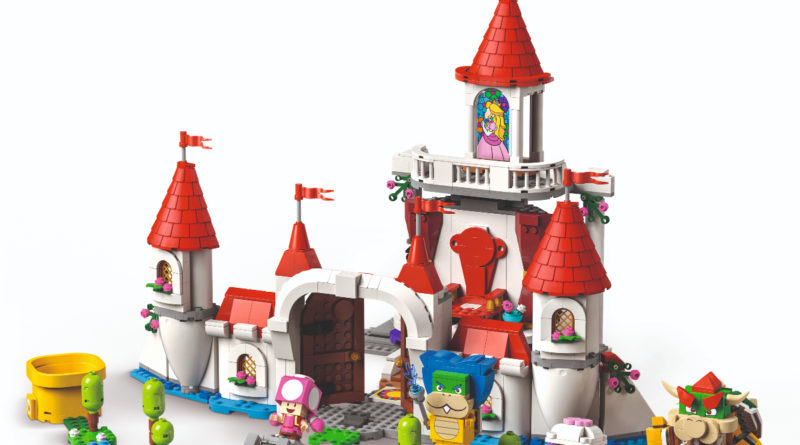 Princess Peach is leading a new wave of LEGO Super Mario sets later this year, including a castle filled with features we wanted to see in a set.

When rumours of 71395 Super Mario 64 Question Mark Block being a model of Princess Peach’s Castle surfaced in 2021, we put together a list of things that we’d love to see included from the video game location. While the castle in 71395 Super Mario 64 Question Mark Block was later revealed to be smaller than some may have expected, a full-sized recreation of the Mushroom Kingdom fortress has been revealed to be launching in August 2022.

There may only be one image of 71408 Peach’s Castle officially available at the time of writing, but the description of the model on the online store has revealed which references are included in the upcoming Super Mario set.

In Super Mario 64, Princess Peach’s Castle served as the hub world with Warp Paintings that could transport you between the various levels in the game.

The description for 71408 Peach’s Castle details that a Bob-omb painting with an Action Tag is included – a likely reference to the painting for Bob-omb Battlefield in Super Mario 64, meaning you should be able to recreate this gameplay element from the game in the 2022 build.

It simply wouldn’t be a model of Princess Peach’s Castle without the stained glass window design that has remained in many digital interpretations of the castle throughout the franchise.

The LEGO Super Mario design team has included the window in 71408 Peach’s Castle, right at the top of the model. Whether this will be home to a function is unknown, but it makes for an appreciated decorative touch either way.

Also from Super Mario 64, then later referenced in Super Mario games featuring the recent Paper Mario title, is the painted lobby with an intricately tiled floor.

The blue walls are not included in 71408 Peach’s Castle but the centrepiece of the floor is, with the sun-shaped design located next to the double doors of the fortress’ interior.

What it doesn’t include – Princess Peach

While not featured in 71408 Peach’s Castle, we mentioned how we wanted to see a brick-built Princess Peach figure in our initial list. However, the LEGO Super Mario design team have gone one step further, transforming Peach into the latest controller character in 71403 Adventures with Peach.