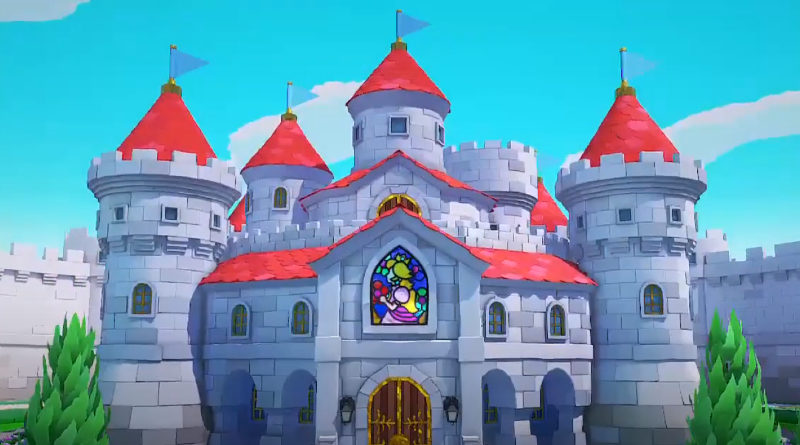 A LEGO recreation of Princess Peach’s Castle is rumoured for 2021 but with 40 years of Super Mario history, what inspiration could the it draw from?

Although not currently confirmed by the LEGO Group, a D2C LEGO Super Mario set depicting Princess Peach’s idyllic castle is rumoured for later this year. Further evidence suggesting the model’s existence has us wondering which games the reported build’s designers could base it on.

However, what if a LEGO Princess Peach’s castle could combine multiple iterations into one cohesive interpretation? We’ve got a few ideas for rooms and features within the rumoured 73195 Peach’s Castle, so stay tuned as we explore the history of this digital fortress.

One of the most iconic locations within Princess Peach’s castle is the lobby from Super Mario 64 with its painted walls depicting the landscape of the Mushroom Kingdom and a chequerboard floor.

Such a design wouldn’t be hard to achieve in LEGO, with tiles forming the floor and the walls achieved a similar way through the S.N.O.T. (Studs Not On Top) building technique. Although the original game’s design might feel aged, it was updated for Paper Mario: The Origami King and we can imagine the LEGO designers referencing the updated source material.

Another feature from Super Mario 64 we’d love to see is at least one of the warp paintings, which acted as gateways to the game’s various levels. These could be achieved through printed or stickered tiles, with a hidden surprise behind them.

Taking inspiration from 71374 Nintendo Entertainment System’s underground Easter egg, the walls holding the paintings could feature a small amount of space to hold a brick-built interpretation of the corresponding area, such as Bob-omb Battlefield’s winding hill.

No physical recreation of Princess Peach’s Castle would be complete without the stained glass window design that has reminded throughout almost every version of the fortress since its debut.

Whilst a print or a sticker could represent the design, we wonder if the LEGO designers could tackle the elegant window using transparent pieces neatly stacked together to depict the artwork, and showcase the design when a light is shone through. Alternatively, a sticker placed on a transparent brick might achieve a similar effect.

As a callback to one of Super Mario’s most well-known Easter eggs, a small build representing Yoshi sat atop the castle in both Super Mario 64 and Super Mario Odyssey would be a simple, but faithful feature for the most dedicated fans.

Depending on which game the LEGO designers were to theoretically take inspiration from, a function for some folding stairs could also feature, or maybe even a cannon to launch Mario onto the roof to meet the green character.

We promise this is the last callback to Super Mario 64, but the endless stairs that led to the final Bowser boss battle might sound physically impossible, but would make for a fun Easter egg if done properly.

For those unfamiliar with the stairs, any attempt to climb them before reaching the required number of stars would teleport Mario to the bottom again seamlessly, forcing the playing to ascend over and over again. A LEGO build for them might only feature a few steps, just as long as the intimidating Bowser paintings are included.

What would the rumoured LEGO Super Mario Princess Peach’s Castle set be without the titular character herself? Several of the Mushroom Kingdom’s characters have been transformed into bricks so far, including Toad, Bowser and Mario. However, we can’t picture a better opportunity to introduce the royal figure than this.

Since Princess Peach is seldom a playable character throughout the franchise, we can imagine a buildable figure similar to Yoshi being used to represent her. However, it could also be a detailed microfigure to fit in with the reported scale.