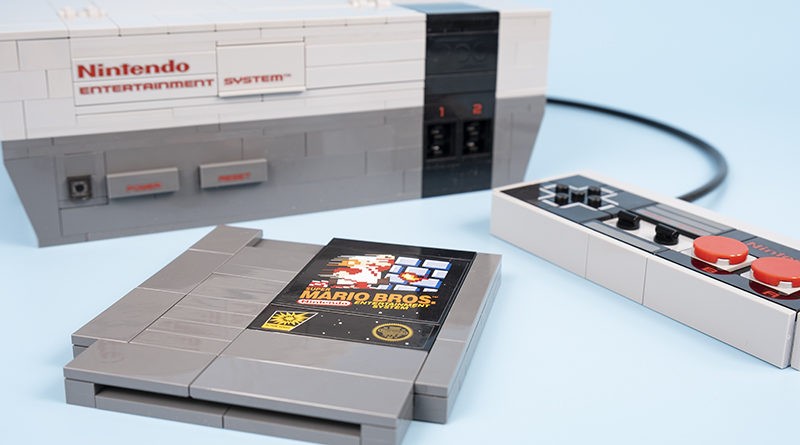 There’s more than nostalgia to be found in LEGO 71374 Nintendo Entertainment System, a set that is as fun to build as it is to admire.

The LEGO Group partnered with Nintendo to develop new sets a few years ago, with the Super Mario theme being the big launch that has arrived as a result of that. While that product line is ambitious in its attempt to fuse tech and traditional LEGO building, it is not something that adult fans are likely to find terribly engaging. Thankfully, something else came out of that collaboration too.

In the mid-1980s, the world of video games was rejuvenated thanks to the arrival of the NES – the Nintendo Entertainment System. For an entire generation, it created lifelong memories, many of which are of playing Super Mario Bros. Even the shape of the console itself, sat in the corner of a bedroom, is ingrained. In 71374 Nintendo Entertainment System, fans of the classic console can recreate their childhood while enjoying some wonderfully indulgent LEGO building.

During the latest season of LEGO MASTERS Australia, two teams were tasked with recreating real life objects at 1:1 scale using LEGO elements. While the builders ultimately came up with convincing replicas, the task illustrated just how difficult it is to capture every angle, groove and indent when using only parts that exist within the LEGO system.

Knowing just how tricky it is to do makes the feat that the LEGO design team has achieved here all the more impressive. That this LEGO NES looks identical to the actual console, that it is shaped in such an authentic way, that there almost no studs visible – these are things that are expected in fan models, not official sets.

The most exciting thing about 71374 Nintendo Entertainment System is that it is not one impressive, intricate and interesting model to build – it’s two. There is the NES itself and then the old fashioned television set, both of which are built in very different ways. With two instruction books, there is the option of starting with either – but the bag and step numbers suggest that the console itself comes first.

Every single technique in the LEGO playbook is used to capture the shape of the NES accurately. There is sideways building, there is upside down building, there are loose sections that are then gripped in place… if the whole 18+ marketing push works and some adults come back to LEGO through this set, they will get a crash course in how things have evolved in the past few decades.

Some of the techniques for the sideways elements are unconventional, such as using the back of an inverted slope brick to connect elements to. Small sections are constructed on occasion, then rested in place, before bricks around them trap them in place rather than having them connected traditionally; these sorts of methods were not found in official LEGO sets a few years ago.

It’s not immediately apparent from the outside of the LEGO NES just how much is going on inside, but that myriad of techniques has not been used just for the shaping, but the mechanism too. Working in a fashion that feels authentic to the real life object, the lid lifts so that the LEGO game cartridge can be inserted and pushed down. Feeling the Game Pak click into place is very satisfying.

After building the NES itself, it’s easy to feel that the ‘wow’ moments are over. But the parts usage on the controller is ingenious, with its small, slender profile reflected accurately. It isn’t packed with the array of techniques that the main attraction is, although creating half stud offsets should not be sniffed at, but after building something so complex it illustrates that simple techniques can also yield great results. Ditto for the cartridge, which is all about the shaping.

Going through that process of building the model is incredibly engaging, but what makes it all the more rewarding is that the designers have thought about how fans will show this off. A side panel pops off to reveal a hidden micro Super Mario Bros. Warp Zone, the top panels are easily removed to reveal the internal mechanism and of course the controller can be connected to the relevant port.

Despite just what a delight that model is to build, it’s only half of the story. The television is not quite as intricate but is still a LEGO education and offers a refreshing change of pace once the grey box is complete.

While it starts from a fairly traditional LEGO base that becomes the back of the set, the old fashioned 1980s tv quickly turns into something else entirely. Rather than just being a tv with a screen depicting Mario, the screen will be able to move, giving the impression that Mario is travelling through an 8-bit platformer. That means that this build must house a robust mechanism to allow that screen to go around.

Sure enough, the bottom of the build quickly shows how that will operate. Technic gearing comes into play so that a handle sticking out of the side will be able to operate the moving screen, with wheels incorporated so that it will roll along smoothly. This is where the bulk of the building is during this model, as the sides of the television are quickly assembled in a traditional way.

Contrasting with the intricate nature of the Technic at the bottom of the box is the screen, which first requires connecting lots and lots of tread pieces. That part is enjoyable thanks to the delightful click they make as they connect, but when it comes time to align dozens of 1×1 tiles and plates, things get a little tedious. It’s mainly because of the contrast to the building that has come before, as everything has been progressing at quite a pace, only to suddenly slow down significantly.

The front of the television is another illustration of nice parts usage and intelligent techniques. The speaker is simply 1×1 tiles facing outwards, yet looks perfect, as do droid heads serving as buttons. Most surprising and impressive though is the channel dial at the top, which makes a clicking sound as it is turned thanks to a flexible element catching a gear behind it – it’s one of those details that this set didn’t need include, but opted to anyway.

A special element included in the set is the 8-bit Mario, which is attached to a clear rod and dish element. This sits in front of the screen, with the dish touching the smooth tiles surface. Once the crank is turned, the screen begins to rotate and Marion can be seen running and jumping through a Super Mario Bros. level. It is a pleasant surprise when it works as smoothly as it does.

Thankfully, the television is not 1:1 like the console, but it still perfectly captures the vibe of 1980s sets and is a reminder of how quickly that technology has developed.

While it’s old hat to discuss printed pieces and stickers, just as it’s the LEGO design team’s job to justify stickers, it’s the job of consumers to complain about them and demand better. In the case of 71374 Nintendo Entertainment System though, almost every decoration is printed – a great relief, as aligning the lettering would be an incredibly stressful process. The only labelled decorations are those on the game cartridge and the one on the back of television.

An exclusive element is included in the set, an 8-bit Mario tile, that has a single stud on the back to attach specifically in the way the set intends. It’s a neat little piece, perfectly matching the look of Super Mario Bros. design, but probably has little utility outside of this model.

Beyond that, 1×1 elements represent Mari’s enemies and some of his power-ups. Goombas, a Super Mushroom and Red Shells are all included, also in an 8-bit influenced style. There’s even a few spares, providing the opportunity to amend the course or use them outside of the set. It’s actually a shame that, since they are in production, the LEGO Group hasn’t released a DOTS style bag of these appealing 1x1s.

The set, specifically the scrolling television, can be enhanced by combining it with 71360 Adventures with Mario Starter Course (review). A plate is removed from the top of the model revealing a code, then the interactive Mario figure scans it, before being placed in his slot. As the screen rotates around, Mario will play the classic music and make authentic noises based on what is happening on-screen, through colour sensor technology. As with so much features in this model, it’s a nice addition that the designers took the care to include.

If it isn’t clear enough already, the set offers a more than worthy package for the price. It’s got a decent parts count at 2,646 elements, but more than that it is so enjoyable to put together that the experience of doing so justifies the price tag. That an attractive display piece arrives at the end of it, with engaging functions built in, furthers the feeling of value that this box offers. It’s very much in contrast to the LEGO Super Mario sets, which generally feel overpriced.

As impressive as this model is, it doesn’t really serve as a template for LEGO sets going forward; while the occasional item as a 1:1 replica might be appealing, it needs to be something that fans hold a special reverence for like the NES. The novelty alone of being able to recreate something 1:1 with LEGO bricks is not enough, so it shouldn’t be something that becomes commonplace in the 18+ range. On this occasion though, it works beautifully.

What elevates it beyond just being a model that brings a smile through the warm nostalgia it brings up is the absolute pleasure of building it. This does not just make for a pretty decoration, it demonstrates dozens of advanced LEGO techniques and constantly intrigues the builder. That it also has two extremely appealing functions just increases its already significant appeal further.

Although the LEGO Super Mario theme has been somewhat disappointing, 71374 Nintendo Entertainment System is not and offers an original building experience that results in an attractive, functional model that will appeal to life-long LEGO fans as well as those who have never touched a brick before in their lives.

71374 Nintendo Entertainment System is available now at at LEGO.com. You can help support Brick Fanatics’ work by using our affiliate links.