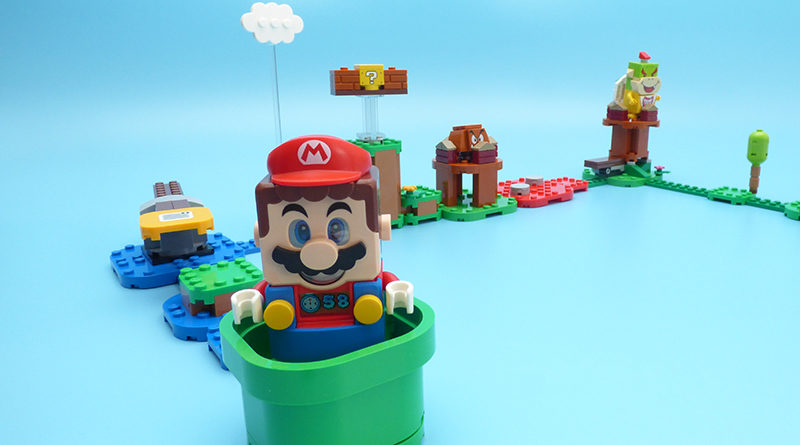 71360 Adventures with Mario Starter Course unlocks every other set in the theme – is this a worthy price of admission to the new LEGO Super Mario theme?

On August 1, LEGO fans will be introduced to the new Super Mario theme, the result of a four year development in collaboration with Nintendo. To offer a playable, video game inspired experience, the team behind the theme is centring everything around the Super Mario figure who comes in 71360 Adventures with Mario Starter Course. This one set unlocks every other set in the not insignificant product range.

There are actually three items included in Adventures with Mario Starter Course that are required to get much out of any of the other sets. They are, as mentioned, Mario himself, then the starting bucket and the finish flag.

LEGO Super Mario as a figure is packed with charm. He features LEGO eyes, mouth and chest. When turned on, he declares “LEGO Mario time” and immediately begins to blink. Although when photographed they come out quite dark, the eyes are actually really bright and make the figure feel alive. While stationery, he glances around. When lay on his back, he slowly falls asleep, snoring away. When whizzed up and down, he makes delighted sounds such as “yahoo”.

All of Mario’s sounds are authentic – the familiar beeps of the game emit from his little speaker while he springs around the course, with plenty of other sounds from the game used at the appropriate moments. There are plenty to list, but fans will be keen to discover them for themselves.

He looks great too. The figure is comprised of just seven pieces, the main two being his moulded overalls and the face-torso-arms section, which features all of the electronic aspect and is where the batteries must be installed. Four one-stud circular tiles provide his ears and buttons, while his cap is a specially moulded element.

When building begins, there is a bit of disappointment. The instructions for the build are only available as part of the free-to-download LEGO Super Mario app. But why? The LEGO Group is proud that this is a digitally enhanced product, but one that requires only the physical bricks and Mario – the app is supposed  to be a bonus rather than a requirement, yet without it there is no building the set.

Those digital instructions are very easy to follow and clear, using the same interface as Instructions Plus. For many fans though, there is something a bit more cumbersome and irritating about using a smart device to build rather than leafing through pages. Including both options would have been nice.

The benefit that digital instructions do bring is that when a section is complete, the app demonstrates how to use it with a short video. Unfortunately, these are a bit inconsistent in their clarity. Some make things very obvious, others don’t. For example, defeating Bowser Jnr nets the player 10 coins – but the video, and Mario’s screen, imply he is worth only one coin. This suggests that there is little incentive in spending any of the 60 seconds fighting him, until the (Mario) penny drops and it becomes clear he is worth 10 coins.

Onto the building – the construction of this set is incredibly simple, and the build experience in no way feels like a £49.99 set. That is not necessarily surprising, as the box also contains this incredibly cool smart toy, but it is worth noting that those 231 pieces come together very, very quickly.

When the set is built, it is visually very striking and screams Mario. The clear, consistent blues, greens and reds look like they have popped off the screen. By having a very simple way of putting it together, with two wide plates offering connections between the platform spaces, it has a design that is elegant in its simplicity.

In order to achieve this degree of simplicity though, and presumably to make sure children don’t have to wait too long before playing, a lot of the track is simply two wide plates connected to specially moulded elements. The whole theme is based around these new pieces. One is a new 4×4 element with a tiles centre, the other is a new 10×10 element with a few studs in the middle – both have rounded corners.

This does make them easy to reconfigure into new tracks, with the idea being that there is no right or wrong way to put the circuit together – but it is most satisfying to put the Bowser Jnr boss fight near the end, so that Mario can have a triumphant finish.

Another great visual touch comes in the tiny font used for the Start and Finish spaces – despite it being too tiny for most people to try and read, it features the classic Super Mario font. Real attention to detail has been paid in the graphic design, which continues onto the finish flag, Bowser Jnr and the Goomba.

Moving onto the gameplay, the idea behind this theme is that children will experiment, create and find their own way to play – so things are kept simple. Mario is placed on the ‘Start’ square, and a 60 second timer begins. Now he must traverse the track, accrue as many coins as possible before the time runs out and land on the finish square.

Mario acquires points by being ‘walked’ along the coloured bricks, with green and blue giving coins but red not – if he spends too long on the lava, it leads to his demise. Special spaces give additional points – by standing on the yellow platform without falling, Mario can rack up lots of coins. He can also hop onto the cloud and earns coins by being whizzed around in the air.

The Question Mark block contains bonuses that will help Mario on his journey, offering extra time, Star Power, five coins or 10 coins, replicating the random power ups that he can find in an actual video game. Beating bad guys earns points too, so the character can jump up and down on the Goomba or Bowser Jnr to defeat them.

What that breakdown illustrates though is that certain actions are pretty pointless, so it makes most sense for those seeking maximum coins to just spend a lot of time on the yellow turntable. It is more fun to vary the game of course, but then that yields fewer coins, which is where the video game challenge aspect breaks down – without the rules, restrictions and challenges provided by a video game, the sense of achievement isn’t really there.

One of the most consistently impressive things about modern LEGO sets is their stability. Looking at recent releases such as 75275 A-wing Starfighter and 21322 Pirates of Barracuda Bay, even builds designed for adults are put together in such a way that they can be picked up and moved.

That is not the case with LEGO Super Mario. Because the sets are designed to be connected using the new connector elements, it can only be used on a table top. Once set up, it is no use trying to move it as the flimsy plate-and-connector connections will just break apart. For those keeping it on a table it is fine, but in contrast to other modern LEGO models it cannot be moved.

The fragility further comes during gameplay. To collect coins, Mario must be bopped up and down along the track, on platforms, on levers and on villains – always with that timer in mind. That means that there isn’t always time for precision placement of Mario onto an item, which after a few plays means things will start falling apart – it might be the odd tree getting knocked off, it might be Bowser Jnr’s fort just sort of falling apart instead of popping off when the lever is pressed.

To clarify, the play is definitely diverting and enjoyable, but once the concept is clear and has been mastered, it loses its lustre. While that might be intentional to some extent, encouraging fans to buy expansion sets, the short gameplay provided in the starter pack actually makes the idea of buying expansions for only a short extra burst of play quite off-putting.

Due to the large number of moulded platform pieces and basic parts, this set really is all about the game – there is plenty of opportunity to reconfigure the layout and change the game, but not much to actually rebuild it into anything unrelated to the intended play.

While it does have a nice aesthetic to it, the model does not look particularly LEGO like and once the gameplay is factored in, the question becomes… why LEGO? Why not just make a physical Mario toy that does this with basic sections that clip together? It does not at all feel like the buildable aspect is particularly necessary.

It would be easy to dismiss this and say ‘but it’s not for adults, it’s for children’… but even, or perhaps especially, the target demographic will notice the shortcomings. While marked as for 7+, this is probably better for a slightly younger child than that.

The main draw in this set is Mario himself. The figure is excellent, charming and will have anyone smiling as he reacts to different stimuli in comical ways. Unfortunately, the game he is part of does not feel great value for money, as it is too simple to have any longevity. It is still worth considering the starter pack to get a taste of something fun and unique in the LEGO range, but for most fans it will probably be everything they need from the Super Mario theme.

71360 Adventures with Mario Starter Course is available to pre-order now at LEGO.com. You can help support Brick Fanatics’ work by using our affiliate links.