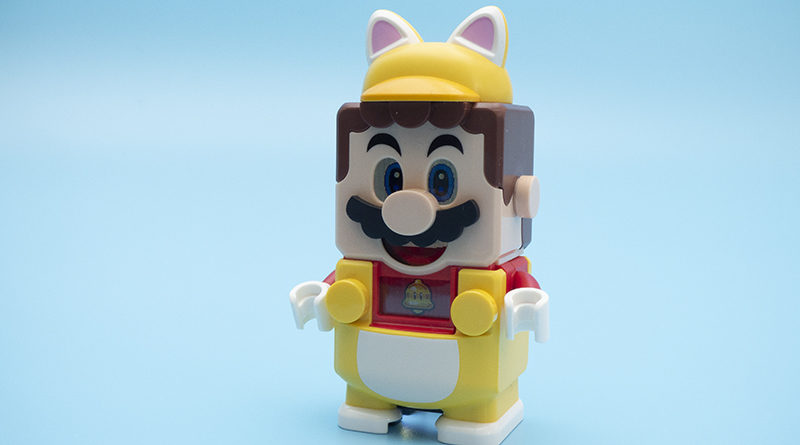 Sure, 71317 Cat Mario Power-Up Pack looks cute – but what else does it add to LEGO Super Mario?

While the Expansion Sets offer ways to change LEGO Super Mario gameplay in a way that makes the levels larger, the Power-Up Packs give Mario new powers as well as a new look. There are four to choose from, with 71372 Cat Mario Power-Up Pack providing a cute cat outfit with some unique abilities.

For the Power-Up Pack to be of any use, fans need to first purchase 71360 Adventures with Mario Starter Course, which contains the Mario figure.

71372 Cat Mario Power-Up Pack is a simple little set, containing Mario’s new outfit – overalls and a hat – along with a little stand to place them on. Considering the set is all about the outfit, the stand is a nice touch as it can be repurposed as an extra platform.

The look of the outfit is perfect, fitting in with the aesthetic that has been established by the games themselves, and the LEGO version of Mario specifically.

To redress Mario, it’s a case of removing his regular overalls – appropriately, he’ll declare “mamma-mia” in shock at being undressed. The top half if then slotted into the cat overalls and the hats are switched to complete the look.

Once dressed as a cat, a new icon pops up on Mario’s chest and he now makes little ‘meow’ and other cat noises.

The biggest change though is that Mario now earns coins for walking up vertical surfaces. Have him start walking up a wall and he’ll gain coins, or purists will prefer to build tall towers within their LEGO Super Mario levels.

Cat Mario does highlight the fragility of the sets. To make Cat Mario earn any more points than usual, a big tower is required for him to walk up. The problem is, if he bops slightly too forcefully the towers fall down in the middle of a 60 second game, which is far from ideal.

It is really fun to dress Mario up and have him walk up walls, but it’s probably the cute look and cat sounds that are the biggest draw this Power-up Pack has. Whether it is worth the £8.99 will probably depend on how much game time a user is getting from the sets – those spending a lot of time playing can probably justify an extra outfit or two.

71317 Cat Mario Power-Up Pack will be available from August 1 at LEGO.com. You can help support Brick Fanatics’ work by using our affiliate links.