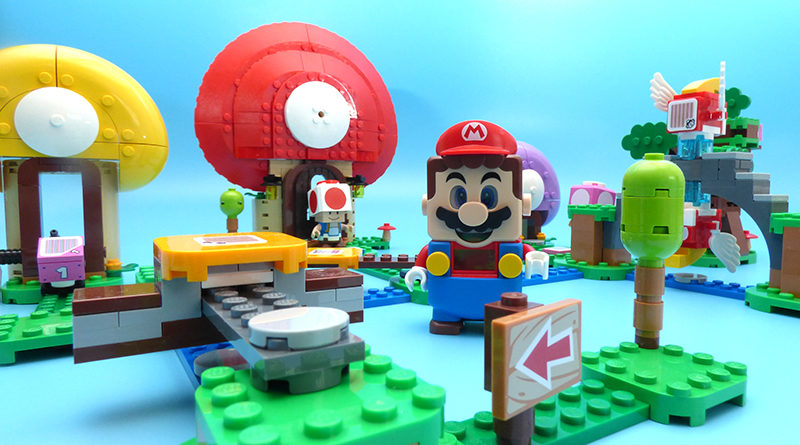 71368 Toad’s Treasure Hunt Expansion Set offers more gameplay and set pieces than some other LEGO Super Mario sets – is it worth adding to the layout?

In the LEGO Super Mario theme, 71368 Toad’s Treasure Hunt Expansion Set is a very significant set – it includes Toad, Toadette and mushroom house set pieces too. It also offers a variety of elements to expand a course – is that enough to make it stand out from the many other expansion sets that will also be released on August 1?

Unlike most LEGO themes, Super Mario has a single set entry point. In order to get any interaction from the various sets in the theme, fans must first buy 71360 Adventures with Mario Starter Course – it includes the titular character along with the start and finish points.

71368 Toad’s Treasure Hunt Expansion Set is one of the largest sets in the theme, and it shows. There is more building here than in the other sets made available for review (71360 Adventures with Mario Starter Course, 71365 Piranha Plant Power Slide Expansion Set and 71366 Boomer Bill Barrage Expansion Set). That said, it isn’t exactly deeply satisfying LEGO building.

The bridge and sliding aspects are simple – most fans will be able to build them off the box picture without even accessing the app. The treasure chest is a little more interesting, but even the mushroom houses are incredibly basic – that said, they do look excellent when built. The tree is just a case of stacking a few brown bricks on the new green platform pieces.

Building the set highlights how little this feels like it needs to be a LEGO product. For $69.99, fans can buy a much more satisfying set from any number of themes, where there is actually a sense of curiosity while building.

This theme is focused on gameplay though, and 71368 Toad’s Treasure Hunt Expansion Set offers some nice additional aspects to that. Throughout the theme, the yellow balancing challenges are the best game aspects, as they require a bit of skill and practice. There are two included here and both are good fun.

Offering something unique in this set are the pink treasure boxes – if Mario can locate all three, he will get a nice coin bonus. To access them, he must jump on a lever, which reveals the crate, so he can then jump on it and continue with his journey. While jumping on levers and then boxes, it makes this whole thing feel much more like a platformer – perhaps more functional aspects in these sets would improve the experience.

Another functional aspect is less satisfying. Two Cheep Cheeps are connected to the bridge with trans elements to give the impression they are flying. Mario must bounce on them to send them flying round – only if he actually sends them round, he doesn’t sense them well enough to get the coins; if he does sense the code, he doesn’t send them spinning.

Toad and Toadette both look absolutely adorable. Decorated 2×2 cylindrical pieces make up their bodies, which their arms plug into, then the same new element used on the mushroom caps them off. They use the new feet element that is common to many characters throughout these sets. To get coins from Mario’s friends, rather than bouncing on them he bounces on tiles that are placed close by to them.

71368 Toad’s Treasure Hunt Expansion Set complements 71360 Adventures with Mario Starter Course well visually. It should not be overlooked that there is something really cool about seeing this all set up, with it almost having a DUPLO vibe thanks to the size of the new 4×4 plate-tile pieces and vibrant colours.

When playing this set, it really starts to feel like being in a video game at times – bopping Mario onto the levers, then bopping him onto the boxes, feels fantastic. But there is no escaping that set costs $69.99, and no matter how game-like it initially feels, the replayability is not strong enough to justify the pricetag.

71368 Toad’s Treasure Hunt Expansion Set will be available from August 1 at LEGO.com. You can help support Brick Fanatics’ work by using our affiliate links.