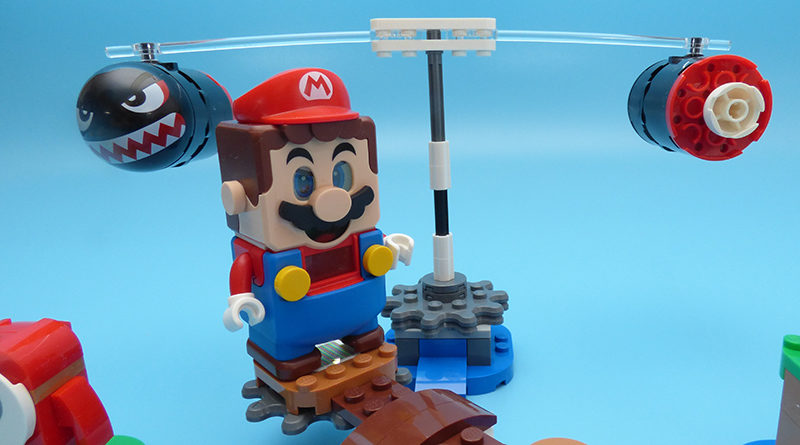 Presumably renamed to be more LEGO friendly, the dreaded Bullet Bills turn up in 71366 Boomer Bill Barrage Expansion Set to provide an extra level of danger to Mario. This LEGO Super Mario set sees the character turning on a turnstile over water, trying to avoid the Bullet Bills circling around.

As with every set in the theme, this can only be played with 71360 Adventures with Mario Starter Course – without that starter pack, fans will not have Mario himself or the start and finish spaces that make the entire game playable.

The set builds a turning plank, with cogs underneath the platforms. When it is fully rotated, those cogs catch another cog on a separate island that turns the Bullet Bills. Once Mario is on the platform, the enemies have a good chance of knocking him off and interrupting his progress.

What is really neat about this section is that there are two difficulty levels. Mario can be placed on the studded platform, giving him extra stability, or the tiled platform, putting him at greater risk. The latter makes for much more challenging gameplay.

It is hard to discern how the mini game is supposed to work – is Mario supposed to be rotated all of the way around, or back and forth to avoid the Bullet Bills? The instructional video in the associated app is unclear. The designers would probably say it is up to the user to play as they like, but that’s a bit frustrating when the user feels like they are missing something about the game’s intention.

Using the app, little videos in between each set of instructions show what to do with Mario, or with a new enemy that has been built – but these vary in quality. When it comes to genuinely confusing things, like how this turntable is supposed to operate, there is no useful direction.

A classic Mario Mushroom comes in the set, providing three coins when landed on. A special new element provides the dotted red top, which is placed on a hinge element to get the correct angle. It looks pretty cool as a LEGO representation of the familiar characters.

As for beatable villains, a Shy Guy is included in the set, with the wonderful printed tile used for the face capturing their blank expression. The character is captured perfectly as a simple little build. Unfortunately, defeating Shy Guy nets only one coin.

71366 Boomer Bill Barrage Expansion Set is one for Super Mario diehards who want Bullet Bills and Shy Guy, but the confusing mini game is nowhere near as successful as the simple – but more rewarding – 71365 Piranha Plant Power Slide Expansion Set.

71366 Boomer Bill Barrage Expansion Set will be available from August 1 at LEGO.com. You can help support Brick Fanatics’ work by using our affiliate links.