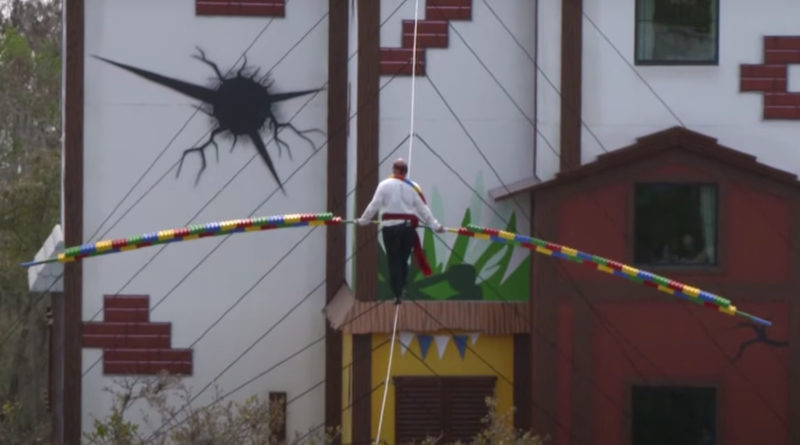 A tightrope walker has made his most recent walk high above LEGOLAND Florida, incorporating giant LEGO bricks into his act.

LEGOLAND Florida was the most recent host of acrobat Nik Wallenda on a 60 feet-high saunter through the skies of the resort, all to promote the Pirate Fest weekends.

Nik Wallenda holds the Guinness World Records for his high-wire performance over Niagara Falls and recently brought his talent to the LEGOLAND Florida resort for a 600 feet journey through the air. Not only did he have to walk the length of three football fields between the LEGO Movie World and LEGOLAND Pirate Hotel, but he did so with a balance beam made with giant LEGO bricks.

The event was streamed on LEGOLAND Florida’s YouTube channel, running for over 20 minutes. Those attending in person could stand below the wire, watching the aerial performance. Despite the height and length of the wire, there was no nets or any equipment to save the acrobat from a fall. One of the most impressive parts of this event has to be the sheer weight of the beam, with the bricks making it a total of 70lbs, twice what the performer is used to holding.

LEGOLAND Florida hosted this event as part of the recent Pirate Fest weekends and it’s overall anniversary celebrations, which also include some added shade for the Miniland area.