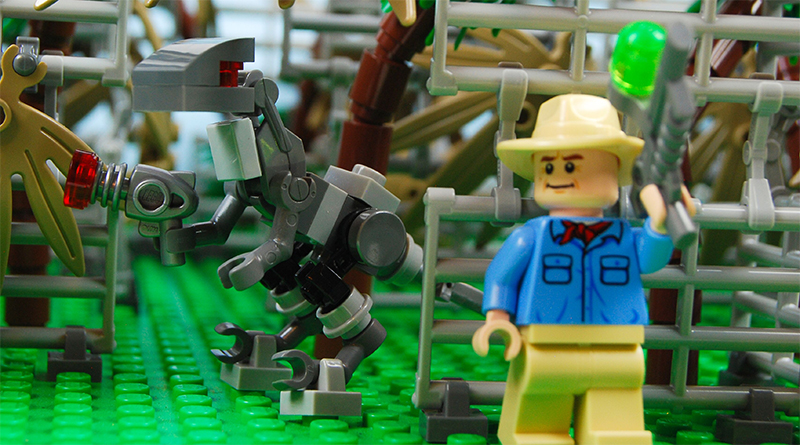 While LEGO Jurassic World sets may offer a few theme park attractions, to complete a LEGO dinosaur destination fans will need to build off grid

In the original Jurassic Park film, Jurassic Park felt very much like a safari, with off-roading jeeps allowing a close-up look at dinosaurs and the track-following Ford Explorers guiding guests through a prehistoric tour. When it came to Jurassic World, the film’s trailers declared “the park is open” and it sure was – finally, fans could see some of the attractions that an operational dinosaur amusement park would include.

The petting zoo was one of these, a place where toddlers could ride around on the backs of young Triceratops. Gyrospheres provided a more thrilling experience, offering guests secure giant hamster balls to ride around in to see dinosaurs close up. 75937 Triceratops Rampage offers the quaintest ride yet, providing guests with a sedate experience.

In Brick Fanatics Magazine Issue 10, the How To… section share inspiration for more Jurassic rides to really expand the theme park. Models featured include Dino Ball, a fearsome laser tag and a robo-raptor. Full instructions are provided for the mechanical dinosaur, which is inspired by 75938 T. rex vs Dino-Mech Battle.

To get inspiration and instructions for all-new LEGO Jurassic Park builds, order a copy of Brick Fanatics Magazine Issue 10. For an inside look at how LEGO Design Manager Marcos Bessa came up with one of the wackiest LEGO sets of the year, also buy a copy of Brick Fanatics Magazine Issue 8. To never miss a fascinating insight into the inner workings of the LEGO Group or an incredible new build from a talented builder, start a great value subscription, to get new and exclusive LEGO insights every single month.