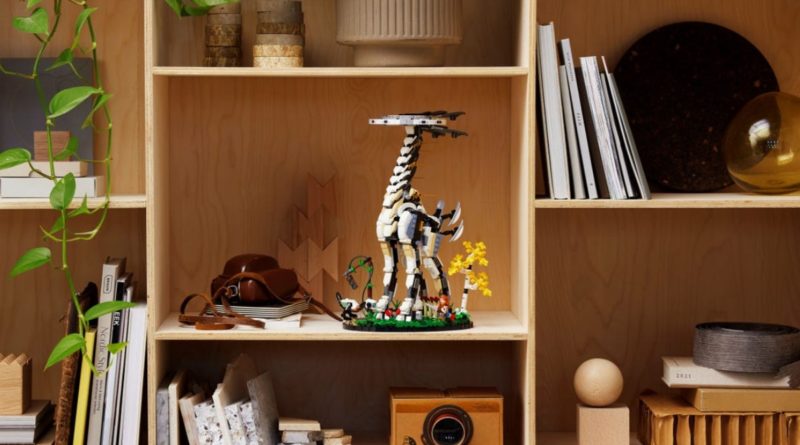 Horizon Forbidden west is getting a LEGO set soon, but for those without a PlayStation, just what is the game and why does it have a model?

Horizon Forbidden West is the sequel to Horizon Zero Dawn from developer Guerrilla Games, a video game exclusively released for PlayStation consoles (and later released on PC) set in a post-apocalyptic world where the remnants of an ancient civilisation included skyscrapers, cars and amenities that we take for granted today.

We won’t delve too far into the plot of the first title in this article, but know that the world is filled with futuristic machines resembling animals that roam the land and helped to restore the planet after almost all organic life was hunted down and destroyed, but we won’t say by what. Two of these machines are included in 76989 Horizon Forbidden West: Tallneck, a Watcher (pictured below) and a Tallneck.

Very few of these machines are friendly and most will attempt to hinder the progress of Aloy in her journey to discover the mysteries of this ancient world. Aloy is the protagonist of both Horizon Zero Dawn and Horizon Forbidden West and is featured as a brand new minifigure in 76989 Horizon Forbidden West: Tallneck with dual-moulded hair that represents her wild orange hair and her focus.

The focus is one of many devices of the same name that allows wearers to see parts of the world that would otherwise be invisible, including glimpses of the civilisation that has long since been destroyed. The Aloy minifigure includes a bow and a spear, the latter of which is a key part of the game.

Aloy’s spear can be upgraded as part of the story of Horizon Zero Dawn to override machines by tapping and holding the tip of the weapon to their body. Tallnecks are one such machine that can be overridden after Aloy climbs up their tall frame.

As helpful as that summary might have been, why is 76989 Horizon Forbidden West: Tallneck launching on May 1, 2022, when Horizon Zero Dawn originally launched in February 2017? The answer to that is the sequel that releases this Friday, February 18 on PlayStation 4 and 5.

As revealed on the PlayStation blog, the initial title has sold over 20 million copies to date. Combining those sales figures with the arrival of a sequel soon likely convinced the LEGO Group and PlayStation to team up for 76989 Horizon Forbidden West: Tallneck. The set’s name reveals it is based on the sequel rather than the original game, and both included machines have been confirmed to return in Horizon Forbidden West.