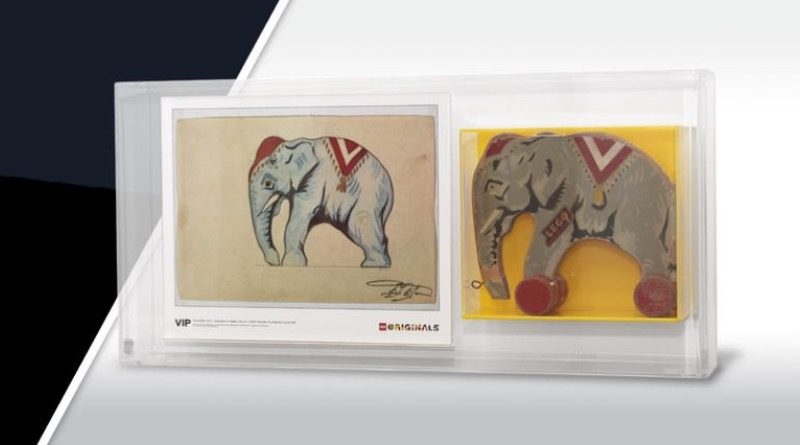 The LEGO Group is raffling off a genuine antique in its latest VIP sweepstakes, with one lucky winner taking home a wooden elephant toy that’s almost 90 years old.

Long before the LEGO Group churned out billions of plastic bricks every year, its primary focus was on quaint (but charming) wooden toys. The pull-along duck is probably the most well-known (and even warranted a plastic rendition last year, because hooray for synergy), but it wasn’t the only animal the company produced in those early days.

If you were a kid in 1937, for example, you might have found yourself coming home from whatever passed for a toy store in the 1930s with a LEGO wooden elephant. And now, almost nine decades later, you can relive that experience by bagging yourself that very same toy in the latest VIP sweepstakes.

The prize is billed as a ‘one-of-a-kind’ antique, and that’s certainly true of its presentation if nothing else. Fittingly for a toy you’re probably not going to want to actually play with (sorry, kids), the elephant – valued at €450 / $550 (or roughly £385) by the LEGO Group – will be delivered to the lucky recipient in a sealed display case, alongside an art print that’s ‘suitable for framing’.

A single entry costs 50 VIP points, and you can enter up to a maximum of 50 times (spending 2,500 points in the process). But beware: you can only put your name in the virtual LEGO hat if you live in the UK, the US, Canada (excluding Quebec), Austria, Estonia, France, Greece, Hungary, Republic of Ireland, Latvia, Lithuania, Luxembourg, Netherlands, Switzerland, Slovakia or Sweden.

The sweepstakes closes on April 4. And remember, you’ve still got time to enter the LEGO Group’s other ongoing raffle, in which you can win LEGO VIDIYO mascot L.L.A.M.A’s signed roller skates.